Home » Lifestyle » Adam Cole Shares How His Character Will ‘Organically’ Change In AEW: ‘I’m Excited To See What Happens’

Ahead of his in-ring debut for All Elite Wrestling, Adam Cole reflects on how his character will evolve, what it’s like to work alongside girlfriend Dr. Britt Baker, and his thoughts on NXT 2.0.

Adam Cole is All Elite, bay-bay! And tonight (Wednesday, Sept. 15), he proves it. Less than two weeks after debuting with All Elite Wrestling, Adam wrestles his first match for the company, taking on Frankie Kazarian as part of AEW: Dynamite. While professional wrestling fans are expecting the same Adam Cole who held the NXT Championship for a record-setting 403 days, he tells HollywoodLife that he plans to bring something new not just to this match — but to his entire run in AEW. “The thing that I have always done, from a very young age with my wrestling career — I always try to adapt to who it is I am working with or who I am wrestling or who I am talking to, whatever that may be,” he says in an EXCLUSIVE interview. “For me, that helps the Adam Cole character never feel stale, never feel like he is doing the same exact thing.”

When AEW debuted in 2019, it promised to change the wrestling landscape (and Chris Jericho, upon joining the company, vowed that it would “change the universe.”) Perhaps the biggest change AEW has made is within the roster itself. Miro, formerly known as Rusev, has transformed himself into “The Redeemer,” a divine-driven demolisher of men. Jon Moxley, the former Dean Ambrose, has become a hard-edged, deathmatch-lovin’ wild thing. Dr. Britt Baker’s character has gone from “she’s also a dentist” to being one of the most ruthless and beloved members of the AEW roster. The shift in these on-screen characters has been a natural evolution, and Adam promises the same will happen for him. “A lot of that [change] is going to depend on who I am in there with,” he says. “If I am in there with a CM Punk or a Frankie Kazarian or if I am in there with The Young Bucks (Matt and Nick Jackson) or Kenny Omega, I often have adapted to change based on who I am facing, and on the story that we are trying to tell.” 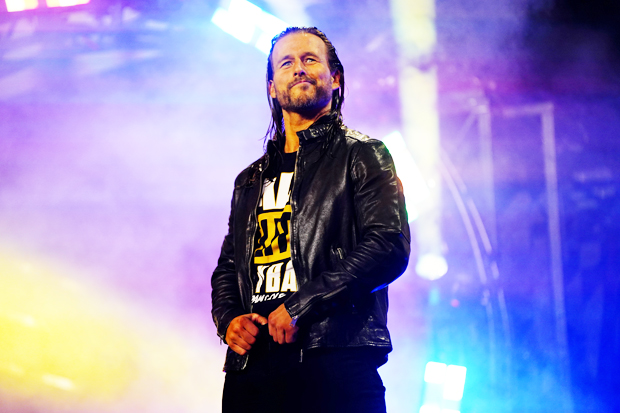 “So, you are going to see a lot of different stuff, especially since there is a lot of guys on the AEW roster that I haven’t had the chance to stand in the ring with before. Guys like Jungle Boy, MJF, and Darby Allin. CM Punk is definitely someone I have not stepped in there with before. On top of that, being in there with guys like The Elite, who I have known for years. Kenny Omega, the Young Bucks, and myself have changed so much over the years.”

“I am kind of excited to see what is going to happen,” he adds, “because the beautiful thing about AEW is that so many stories are told and so many things that happen, they happen organically. Like the fans play a big part in how we tell our stories and where we go. So the best part is, and this is exciting for me. I don’t know what my changes are going to be, but there will be some changes, and I am really excited about it!”

While Adam is excited about what he could be in AEW, he made it clear about what he will never be. “Adam Cole will never not be someone who’s thankful for where he is,” he vows. “And I know that Adam Cole, the character, that doesn’t necessarily line up with because Adam Cole the character is very cocky and [thinks he] deserves everything he gets, says he is exactly where he should be. But, Adam Cole the person realizes how special AEW is and realizes how lucky he is that he gets to be a part of an exciting time in pro wrestling, which I feel AEW is at the forefront of. So Adam Cole is going to be so appreciative of where he is at, and I am telling you I am going to enjoy it, my friend, I am going to enjoy it!”

One thing Adam is definitely going to enjoy is being in the same company as his real-life romantic partner, Dr. Britt Baker. After working for rival companies for the past two years, Cole and Baker are together at AEWand  he says it feels “amazing.”

“There was a phase, especially these last few months, where lots of times I would see Britt for half-a-day in a week,” he says. “Britt has really blown up and is busier than ever. I was also very busy, but we were on two totally different schedules. Now getting the chance to travel with her and stay in the same hotel with her and spend more time with her and get to be at work together, it has been awesome.”

“Actually, it made me realize how much I wanted that, now that I have it,” continued Cole. “When you really love and care for somebody, you want to be around them as much as possible, especially when it is something we are both passionate about. So being able to watch her wrestle and then have her walk through the curtain and me be there to give her a hug or a kiss or just talk to her about it, it’s so nice. It was something we didn’t have for a really, really long time. So, it is wonderful. It is great to spend time with her not just in our personal lives but at work now!”

There is always the risk that couples who work together don’t stay together, especially if one is more successful than the other. Adam doesn’t seem phased by this. “[Britt] is a little bit more competitive than I am, so she constantly has that, ‘I want to outdo everyone and outwork everyone,’ and that is why she is so awesome.”

“I am a little more laid back in that sense, but at the same time, I don’t want to go out there and have a match where people go, ‘Oh, that wasn’t as good as so and so’s match!’ So, I would say yeah, naturally there is competition between me and her,” says Cole. “Britt might be a little more focused on it, which is something I love about her. [laughs] We absolutely have exciting competition amongst each other, but at the same time, and she would say the same exact thing, she is really proud of what I have accomplished, and I am proud of what she has accomplished.”

One of those accomplishments is the unsanctioned Lights Out match Britt had with Thunder Rosa in March, which received critical praise from the wrestling world. Some even call it AEW’s Match of the Year, which has Adam feeling like he needs to step up. “Seeing that match where people call it the greatest, if not the greatest matches in AEW history make me go, ‘OK maybe someday I will change that! We’ll see!’” he says with a laugh.

Another thing Cole is passionate about is video games (anyone who has watched Austin Creed’s UpUpDownDown YouTube channel knows this.) Adam, aka TheCHUGS, has his own Twitch channel where he streams video games, and when asked about AEW’s entry into the video game arena, he couldn’t help but be thrilled.

“Oh my gosh!” says Cole. “I am a massive video game guy. Some of my highlights of childhood was playing wrestling games. I get giddy and excited at the idea for people to compare the AEW game to in some ways to a No Mercy or WrestleMania 2000-style game because I know not only wrestling fans, but wrestling fans who are so into that era of wrestling games have been dying and clamoring at the idea of getting a game like that again.”

It’s possible that Adam could be a playable character in both an AEW and WWE game (assuming he’s still included in the upcoming WWE 2k22.) Cole was associated with WWE’s NXT brand until TakeOver 36 on Aug. 22, losing a two-out-of-three falls match to Kyle O’Reilly. Less than two weeks later, he was part of AEW. Despite the career change, Cole says that NXT “holds a really great place in my heart.” On Tuesday (Sept. 14), the brand underwent a shift, debuting “NXT 2.0,” with a new logo, a new lighting scheme, and new wrestlers.

“When I look at that roster of guys,” Cole said of NXT, “I see at a lot of friends. I see some of those guys as some of the most talented pro wrestlers in the entire world. I don’t know what is going to happen with this new version of NXT, but my only hope is that the people that I know and the people I got to work with  — like Tommaso Ciampa and Johnny Gargano and Kyle O’Reilly and Roderick Strong, all of my friends there — I hope they get the ability to showcase how good they are. I know they have had the chance to show that the last few years in NXT, and I hope this new version of NXT puts new eyes on the talent that those guys are because — besides the fact that they are some of my best friends — I really do believe that they are some of the most talented pro wrestlers in the world.” 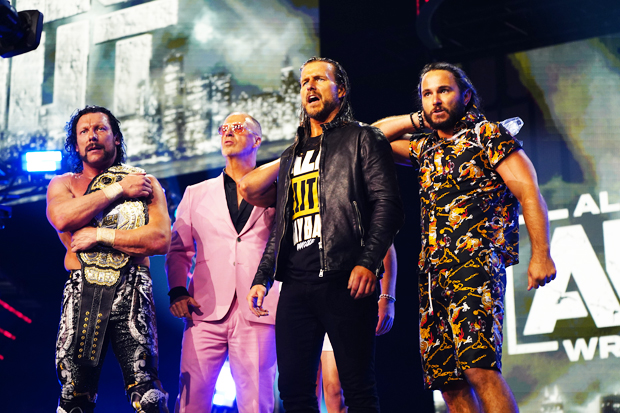 While NXT 2.0 forges a new path, Adam will focus on his new chapter, now that he’s reunited with The Elite. Before Adam joined the WWE/NXT, he was part of The Bullet Club alongside Kenny Omega and The Young Bucks — before they kicked him out. (Literally. Matt and Nick Jackson superkicked Adam in the face.) Four years later, it seems that The Elite is fine…for now.

“I think myself, the Young Bucks and Kenny Omega and the rest of The Elite, we have an understanding,” says Adam when asked how much he can trust his friends, and vice-versa. “And the understanding is that The Elite is the most powerful wrestling group or faction or brotherhood, whatever you want to call it in the entire world. So don’t get me wrong. I have had my history with making decisions that I am sure that the people I made those decisions on would not be happy about.”

“The Young Bucks and Kenny Omega, I can say that about them with our history as well, but I would like to think that we have matured,” adds Cole, “and I would like to think we understood what our goal is. We want to take over AEW in a way that it hasn’t been taken over before. So again, when I said I trust the Young Bucks with my life and I trust Kenny Omega with my life, and they said the same thing. I truly do mean that, and I think they feel the same way. So instead of worrying about that, I think we are going to show with our actions how much we trust each other.”

Adam’s first action happens tonight when he faces off against “The Elite Hunter” Frankie Kazarian on AEW: Dynamite at 8 pm EST on TNT.