Home » Lifestyle » Adam Sandler Disgusted by His Own Beard, Talks About Working with His Daughters and Shaq

The comedian also revealed the strangest thing he’s ever autographed for a fan.

It may be on his face, but Adam Sandler isn’t a fan of his new beard.

During a virtual interview on “Jimmy Kimmel Live!” Wednesday night, the actor shared his honest thoughts on his fresh facial hair, revealing that the scruffy look is for an upcoming movie.

“Wow! That’s quite a beard you have there,” Kimmel said to his guest. “It’s disgusting,” Sandler replied. “I’m sorry it’s not a beard, it’s a mask…when I keep my mouth closed, it’s a mask.”

Kimmel, who was rocking some scruff himself, told Sandler, “You have a lumberjack look to you. You look different with a beard than I would have ever guessed.”

The “Uncut Gems” star continued to throw jabs at his beard, joking that “nobody likes it at all.”

“I’m doing it for a movie. My father had a beard my whole life and this is very similar to the way his beard was, like grey at the bottom,” Sandler explained. “I don’t have gray hair on my head for some reason but I got gray coming out the bottom.”

The “50 First Dates” star said his new look is for a movie he’s currently filming with LeBron James’ production company, SpringHill Entertainment. Though he didn’t share many details about the film, Sandler said he’ll be playing an NBA scout who discovers a player in Spain and brings them to America.

Sandler went on to talk about working with another NBA legend, Shaquille O’Neal, on his latest Netflix movie, “Hubie Halloween.”

“He doesn’t demand much,” Sandler said. “We were shooting in Boston and he just kinda looked at me and I said, “Can I get you some baked beans?’ And he just kept staring and I said, ‘No, how about some fried dough?’ I got nothing. I said, ‘How about six pints of clam chowder soup’ and he gave me the big smile.”

While Shaq’s character in the film has been kept under wraps, Sandler said the former professional athlete “gets the biggest laugh in the movie.” 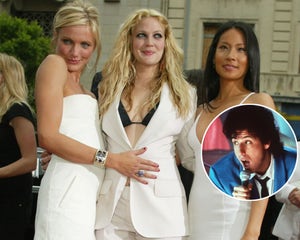 The “Big Daddy” star also spoke about working alongside his daughters — Sunny, 11, Sadie, 14 — in the film, admitting that he gets “panicky” when they are on set.

“My kids had fun. I got very nervous when they were out there,” Sandler recalled. “Everybody recognizes that I get a little nutty when the kids are on the set. They’ve been in all my movies, but this was a little bigger than usual. I start getting panicky and stuff…I’m nervous about them wasting people’s time. I’m psychotic, but they had a great time. They’re sweet as hell and they had fun dressing up and all that stuff.”

During the interview, the “Happy Gilmore” actor also revealed the strangest item he’s ever had to autograph for a fan — and it may shock you.

“I had a person one time — I was leaving a haircut,” Sandler recalled. “And a kid came out with a bag of my haircut and asked me to sign that, and I did that.”

He continued, “On the Internet that night, he was selling it saying ‘Adam Sandler’s pubic hair. It’s a true story. I bought them back for $65.”

See more from Sandler’s interview on Kimmel in the clip, above.

Khloe Kardashian Laughs Off "Shade" Over Her Latest Instagram Makeover