The hundreds of deaths in aged care homes during the COVID-19 pandemic have again highlighted the need for major improvements in Australia’s largely privately operated aged care sector.

More trained staff such as registered nurses and higher staff-to-patient ratios will probably be necessary if we are to protect older Australians from infectious disease and guarantee for them a dignified life with proper care.

The Royal Commission into Aged Care, which has played a crucial role in exposing the failings in the system, has now turned its attention to the difficult choices that lie ahead if we are to fund these costly services in the most efficient way. 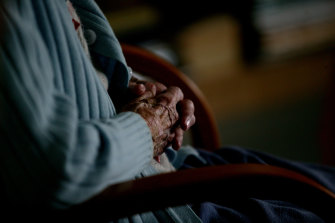 While private operators should absorb some of the costs of higher standards, it is highly likely that more funding will still be required.Credit:Virginia Star

It is already clear that, without reform, increasing government subsidies is a recipe for wasting money. Unscrupulous operators of private aged care homes, which account for about 90 per cent of residents, could use the cash to boost their profits – worth $1.1 billion in 2018 alone – rather than improve care. A report by consultants BDO for the commission found that the sector’s income had risen by 6.7 per cent a year on average since 2009, while expenses rose by just 6.4 per cent.

BDO says there is a “weak relationship” between government subsidies and the quality of care. For example, aged care homes receive higher subsidies for looking after residents with serious health conditions, but the federal government has no way of checking if they use this money to offer better care.

Federal Health Department secretary Brendan Murphy told the inquiry last week that aged care operators were legally “overclaiming” using loopholes opened up by rule changes in 2016. This lack of accountability has prompted calls for nationalisation of the sector, but that would require a huge and potentially unwieldy new bureaucracy. The federal government can achieve the same goals by setting higher standards that are rigorously enforced and by requiring more financial transparency as the price of any extra funding.

The pandemic has exposed the Aged Care Quality and Safety Commission as a weak and passive regulator.

Private aged care operators, a powerful lobby group, will complain about tougher standards. Indeed, they are warning of a wave of insolvencies in coming months because elderly people are refusing to enter aged care out of fear of COVID-19. Yet the sector should be told that without internal reform there can be no increase in funding.

While private operators should absorb some of the costs of higher standards, it is highly likely that more funding will still be required. At a time when the federal budget is facing a $200 billion deficit, the inquiry has heard a range of views on where to find the cash. Former prime minister Paul Keating suggested a system similar to the HECS scheme for uni courses. He said older people should be able to take out contingent federal government loans to pay for aged care which would be repaid after they died from the sale of their homes.

That is just one of many options. But Mr Keating is right about the general principle that older people, particularly those with assets, should shoulder a bigger share of the cost. Thanks to rising house prices and favourable tax treatment, including tax-free super, many in the Baby Boomer generation are doing very well and can afford to pay a bit more.

The commission’s final report will hopefully offer some guidance on how to spread the burden between the federal budget and a more user-pays system. It should bear in mind, however, that some battlers will always need help and the new funding formula must ensure the needy also have a decent home should they require care in their final years.

Barbie's Been All Dolled Up in Designer For 60 Years

‘Skin hunger’ is a real thing. Here’s what you need to know

The Most Surprising Celebrity Transformations of the Week