Home » Lifestyle » Am I turning into a grumpy old lady?

Two weeks ago, Melbourne Lord Mayor Sally Capp asked the question of our city, “Is there a self-absorbed carelessness creeping in? Are manners and respect slipping?”

The following week, I sat in a CBD driveway, waiting to exit. My carful watched as a beleaguered Uber driver tried to wrangle four enormous people with enormous suitcases into his sedan. Then he tried to persuade them they wouldn’t fit.

hey took some convincing, in the teeth of clear evidence. None of the five people involved in this little drama were aware of the four of us, watching and not so patiently waiting. After 10 minutes, I asked if they could move along a couple of metres, as we had been trying to get out for a while. The four passengers ignored me. The Uber driver complied, slowly. No one apologised.

Am I turning into a grumpy old lady? Or does our Lord Mayor have a point? 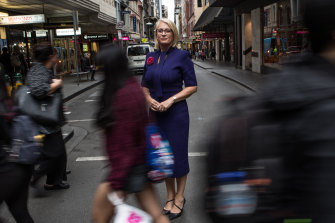 People with a lack of inter-personal awareness push my buttons more than anything else in daily life. Those who, like the Uber driver and his passengers, are blithely oblivious to everything except their own minor inconvenience.

People walking three abreast on a city pavement, moving slowly. Males who indulge in manspreading on public transport, knees wide, hogging precious seats as well as their own. The ubiquitous mobile phones have made it all worse – one more distraction that stops people from looking around and considering the impact they might be having on their fellow travellers on the street, train or life in general.

Traditionally, women are more alert to what is going on with others, trained from infancy to think of others before ourselves. I am constantly scanning my orbit, checking that I am not inconveniencing anyone – from wondering if there is someone on the tram more deserving of a seat, to worrying that I may have said something that might just conceivably upset a friend, colleague or family member. I wish I could stop worrying quite so much about other people and become a little more self-centred, in the sense of being deeply, securely centred in myself.

Meanwhile, I try to be less riled by the folk around me who don’t have the same qualms and sensitivities. But most of the time, I just end up being cross and cranky. And wishing the bloody car blocking my way would notice me, and move.

Clare Boyd-Macrae is a Melbourne writer.

Cannes’ Critics Week Won’t Take Place in May Either