Home » Lifestyle » Another housing ‘solution’ that will drive up prices

Almost three years ago to the day, Scott Morrison told first home buyers he was going to give them a go when he announced a “bold” new policy to help them into the property market.

He unveiled the Coalition’s plan for the government to effectively underwrite deposit mortgage for first time buyers, taking down their deposits to 5 per cent. 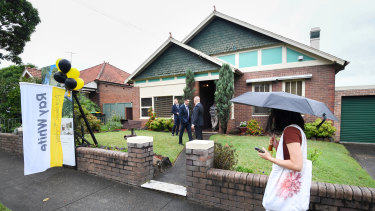 REA Group CEO Owen Wilson says banks have been calculating a borrower’s mortgage serviceability at an interest rate of 5 per cent for several years.Credit:Peter Rae

“They have their first leg on the first rung of the ladder,” Morrison declared of first time buyers.

The latest announcement – allowing first-time buyers to access up to $50,000 of their super – will mean the ladder is now beyond Towering Inferno height.

The reason is simple – both the Coalition and Labor are obsessed with sating demand while ignorant of supply.

That doesn’t include the HomeBuilder grant (which added inflationary pressures to the economy) or the government’s superannuation access scheme it put in place during Covid.

By some estimates, people in their 20s – who traditionally make up the bulk of first-time buyers – took $3 billion out of their super accounts with much of that ending up in property.

The fact the government has come up with so many different ways to pump money into the property market (the median price in Sydney for a house now $1.4 million and $1 million in Melbourne) is the biggest warning that government intervention is adding to housing affordability problems, not solving them.

The only redeeming piece of the newest policy is the requirement that when selling their home, people using the scheme must return to their super the amount they invested plus a share of the capital gain.

But this immediately creates a second round effect.

In 5 or 10 years’ time, when it’s time to move out of suburban Mill Park or Woodcroft for a larger, better appointed and more expensive house, our first time buyers won’t have the full capital gain from the sale of their first home at their disposal.

By intervening in the first time buyers market, the government is setting up a problem for the second-round market.

But this policy is all about the here and now.

Both the Coalition and Labor could have come up with a policy to pay local councils a “supply increase” bonus for changing planning laws to increase the number of homes available in their areas. It would add to supply, do it at a much lower cost and not have such large flow-on effects in areas such as superannuation.

Less than six weeks ago, a parliamentary committee headed by Liberal MP Jason Falinski looked at the idea of using super for housing – and didn’t recommend the form the government has now proposed.

It backed first-time buyers using their super as collateral, arguing there were problems with ripping money out of superannuation accounts and plonking them into the middle of a Saturday morning suburban house auction.

“Allowing first home buyers to access or borrow against part of their super to purchase a home would, in the absence of increased housing supply, likely increase demand and lead to higher property prices,” it warned.

Last week, Morrison attacked Albanese for backing a 5.1 per cent increase in the minimum wage, warning it would lead to higher interest rates while pushing up inflation.

What would an extra $50,000 in the hands of first time buyers do to house prices? It’s inflationary and would put upward pressure on interest rates.

And those on the minimum wage – almost all renting rather than buying – will be priced further out of the property market.

What did Chris Harrison say to Rachael Lindsay?