Opposition Leader Anthony Albanese's closest allies say he is "not for blinking" on Labor's climate change policies and will not be shifting the energy portfolio away from long-time frontbencher Mark Butler in an upcoming reshuffle.

Mr Butler, a South Australian left-faction powerbroker, said on Wednesday his future in the job was a decision for Mr Albanese and he remained "passionate" about strong action on climate change. 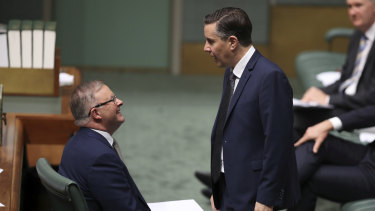 The federal Labor caucus has been plagued with division over the issue since last year's election defeat, which culminated in the resignation of shadow cabinet member Joel Fitzgibbon earlier this month.

Mr Fitzgibbon, who vacated the resources portfolio and has vowed to speak freely about energy policy from the backbench, has called on Mr Albanese to shift Mr Butler for the sake of a "fresh voice" following three election defeats and a series of climate policies rejected by voters.

The NSW MP, who represents the coal-rich Hunter Valley, has called for a “political settlement” with the Coalition over emissions targets, suggesting it should adopt the government's ambition to reduce emissions by 26-28 per cent on 2005 levels by 2030 and hold it to account on its results.

Another frontbencher, Victorian MP Clare O’Neil, said on Wednesday there was an "obsessive focus" on targets and that climate experts argue the debate needed to go beyond that.

"There's a lot of focus in politics and media about targets, what's your 2030 target… 2050," Ms O'Neil told the National Press Club of Australia on Wednesday.

"But when you talk to climate experts… they're talking more about industry by industry negotiations that will help us reduce the emissions in different parts of the economy."

Several left-faction figures, speaking on the condition of anonymity, told The Age and The Sydney Morning Herald, they expected Mr Butler to remain in the job in a likely "minimal" reshuffle next month.

"It would be of course seen as a sign of weakness if he was moved," one opposition frontbencher said. "And too much would be read in to whoever replaced him, be they for the Left or the Right."

Another said: "Why would Albo hand Joel a victory?… everyone is united behind Mark and the policy position apart from a handful. You don't make concessions for a minority when they are in the wrong."

Mr Albanese said on Tuesday that Mr Butler was doing an "outstanding" job.

"What Australia has to do is to ensure that we have a trajectory for zero net emissions by 2050," he said.

Mr Butler has served on Labor's frontbench since 2009, first as an assistant minister for health, then in cabinet in mental health and aged care.

Prime Minister Scott Morrison has flagged a pre-Christmas reshuffle following the resignation and departure of former finance minister Mathias Cormann, who is the government’s nomination to become the next secretary-general of the Organisation for Economic Co-operation and Development.