Australian health authorities are urgently seeking more information from Norway after the country reported deaths in elderly patients who had received the Pfizer vaccine. 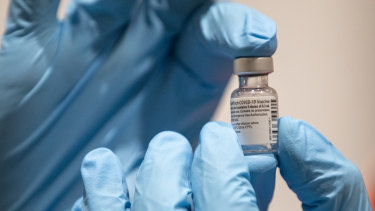 The Australian government has sought more information from Norway over the deaths.Credit:Getty

Norway's medical authority said it's not alarmed, saying there was no concrete connection between the vaccine and the deaths. They said the deaths had occurred in patients who were very frail and had serious illnesses already.

Australia has an agreement to purchase 10 million doses of that vaccine. It has not yet been approved for use in Australia, with the approval process continuing through the Therapeutic Goods Administration.

“As further information is available, we'll share that with the Australian public,” Mr Hunt said.

The Norwegian Medicines Agency (NOMA) told the BMJ it has investigated 13 of the deaths so far, and concluded that common side effects of mRNA vaccines, which include fever and diarrhoea, may have contributed to the deaths.

But the agency's medical director Steinar Madsen said the side effects were not unusual with vaccines. While they were not dangerous in younger patients with fewer health issues, those side effects could aggravate existing health concerns in the elderly.

“We are not alarmed or worried about this, because these are very rare occurrences and they occurred in very frail patients with very serious disease,” he said.

“We are now asking for doctors to continue with the vaccination, but to carry out extra evaluation of very sick people whose underlying condition might be aggravated by it.”

Comment has been sought from Pfizer. In a statement to the BMJ, the company said Pfizer and BioNTech were aware of the reported deaths and were working with the Norwegian health authorities.

Pfizer said the country has priorities for the immunisation of aged care facility residents, many of whom have underlying medical conditions.

“Our immediate thoughts are with the bereaved families,” the company said.

Minister Hunt said so far, results from the US on their rollout of the Pfizer vaccine have been “heartening”.

The US Centres for Disease Control has reviewed roughly 1.8 million doses of that vaccine, with “very positive results in terms of both the safety and the efficacy,” Mr Hunt said.

The minister reiterated that safety was the medical regulator’s number one priority.

“So we'll continue to follow the processes of the medical regulator, because that's going to keep Australians safe and ultimately provide confidence,” he said.

With ‘Little Fires Everywhere,’ Kerry Washington Is Ready to Be Heard

30 Clever Captions For Christmas Onesies, Because The Coziest Season Is Here