A baby who was diagnosed with a dairy intolerance when she was six months old died just two days after her first birthday from a rare form of cancer.

Rose Jeans, from Cefn Hengoed, Swansea, Wales, was diagnosed with the very rare and aggressive Atypical Teratoid Rhabdoid Tumour just a few weeks before passing away on February 13 this year.

Now, her devastated parents Andrew and Catherine Jeans have described what they went through as ‘some sort of war battle’ and are doing all they can to keep their daughter’s legacy alive.

Described by her parents as a ‘little gift’, Rose was just six months old when she was diagnosed by doctors with a dairy intolerance.

However, the baby girl was later admitted to hospital where doctors found several masses on her brain after a series of scans. 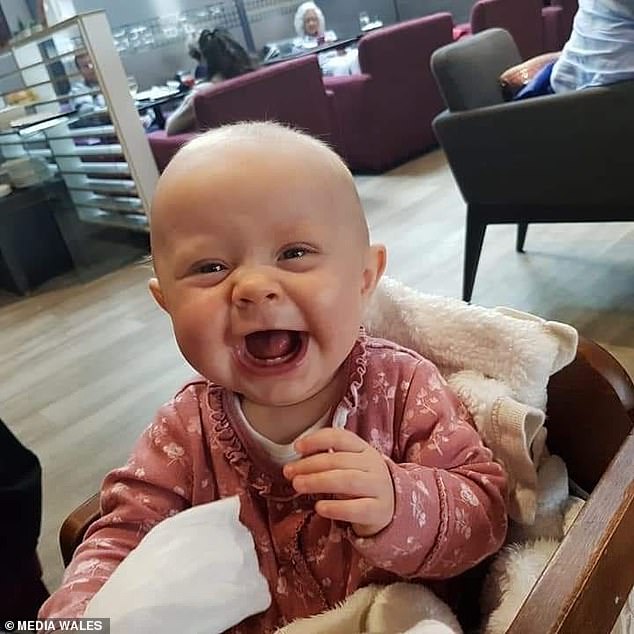 Rose Jeans, from Cefn Hengoed, Swansea, Wales, was diagnosed with the very rare and aggressive form of cancer just weeks before her first birthday 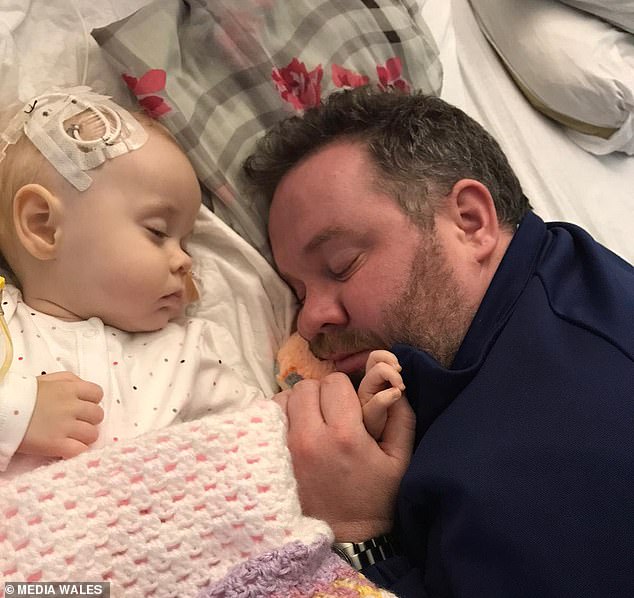 The baby girl (pictured with her father Andrew), who was initially diagnosed with a dairy intolerance, died just two days after her first birthday

Rosie’s father Andrew Jeans said: ‘It started off when Rose was about six months old.

‘She had what seemed like minor bowel issues and was diagnosed with dairy intolerance.

‘By New Year’s Eve, she was admitted to hospital because something just wasn’t right. She was rubbing her forehead and playing with her hair.

‘After scans, doctors found several masses on her brain. It was first thought these masses were benign birthmark-type lesions, but over the next few nights she started to deteriorate.’

On January 12, Rose was labelled nil by mouth and within a few hours blue-lighted by ambulance to the Noah’s Ark Children’s Hospital, Cardiff.

At the hospital she had several MRI’s, CT scans, three brain surgeries. She also had several seizures because of pressure on her brain.

Mr Jeans continued: ‘She spend six nights at the Paediatric Critical Care Unit and on January 28 we were told she had an aggressive cancer, named Atypical Teratoid Rhabdoid Tumour.

‘The few weeks between admission into hospital and diagnoses felt like a lifetime.

‘The large tumour in her spine is what had been causing the bowel problems. We were told there was no treatment for her and that she would only be with us for a few weeks.’

Rose was transferred to Ty Hafan hospice on February 10 and died just two days after her first birthday, on February 13, in her mother’s arms.

Mrs Jeans said the family was still heartbroken by the ordeal and that every day is a new challenge.

She said: ‘The last two days have been hard, but today has been a little more positive. You just never know how it’s going to be when you wake up.

‘The only way I can describe what we went through is like some sort of war battle. What that little girl went through in such a short amount of time was awful and she didn’t complain, she just got on with it.

‘We’re just so incredibly proud of her. She was sent to us as little gift for whatever reason. It’s so brutal how perfect she was and didn’t give anyone signs of what she was hiding.

‘In between my son Oliver, seven, and her, I suffered two miscarriages and she was the only girl on this side of the family. She was so wanted and we loved her very, very much. 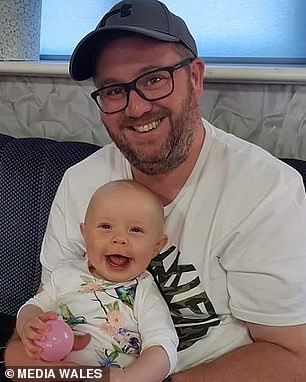 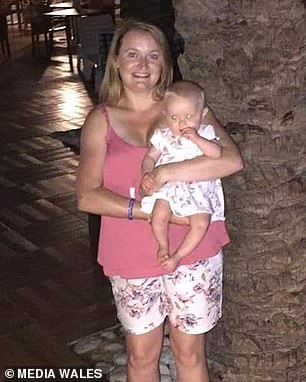 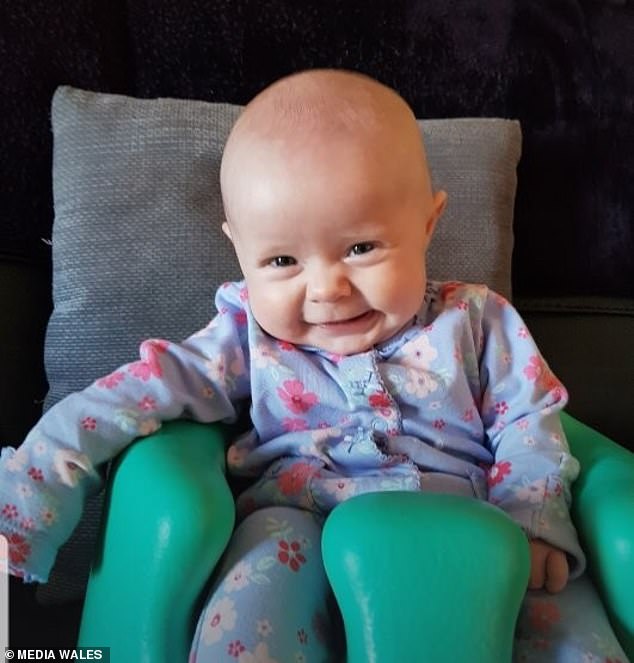 Rose was taken to the Noah’s Ark Children’s Hospital in Cardiff where she had several MRI’s, CT scans and three brain surgeries ‘She had such a character. We nicknamed her ‘Little Miss Unsociable’ because she would choose who she’d give her love to – she didn’t take a shine to everyone but she was always happiest in my arms.

‘We call Oliver Mr Bump because he’s always outdoors and bumping himself, so we had a little ‘Mr Men’ family.’

Rose’s parents said the pain they went through, and are still going through, has been a motivation behind setting up the charity Rose’s Way Foundation.

The name comes from the fact that, from the every beginning, Rose made sure she did things exactly her way.

Mrs Jeans said the main aim for the charity is to help other families who are going through a similar nightmare experience.

Though it’s still early days, they eventually hope to put money towards equipped lodges, where families with sick children can stay at to have a break from hospital settings.

They also hope to get counselling training – or get counsellors on-board – to support families, as well as working with hospices and other children’s charities to supply siblings of sick children with activities.

‘Even though we went through that battle, we had an army of support around us,’ said Mrs Jeans.

‘For example, my Aunt Julie would come and read to her every day while she was in the hospital, and continued to read to her even after she passed away.

‘Not everyone has that support, so we just want to be that Aunt Julie to people who don’t have that network.

‘Things came to a bit of an unexpected halt because of coronavirus, but we’ve already managed to reach out to two families who are going through this.’

Mr Jeans had the idea to create a song in Rose’s memory, for the family to listen to and also to help raise money for the charity.

When the song, called Monsters (For Rose) is purchased, money is donated to the Rose’s Way Foundation.

Mr Jeans said: ‘When Rose was in hospital, I saw James Blunt on This Morning singing his song Monsters, which he wrote about his ill father – it’s about saying goodbye. I thought it summed loss up well and wanted something I could get comfort from.

‘My friend, Kat Morgan, is a singer and has an amazing voice, so she agreed to sing it. Her partner and also friend of mine, Simon Morgan, re-wrote the lyrics so that they fit Rose’s situation. The pair have been a huge support to us throughout this, they have such big hearts.

‘Singer Amy Wadge, who co-wrote the original Monsters has also been in contact to give her support.’

Mr and Mrs Jeans added: ‘We just want something good to come out of Rose’s experience.

‘We will always be haunted with the memories of the procedures, the scans, the seizures, the endless blood taking and Rose’s silent tears of exhaustion.

‘Rose’s legacy needed to be continued, her strength and determination lives on in us – and it will be achieved doing it Rose’s Way.’

Miley Cyrus & Liam Hemsworth Got Married In Secret For This Reason

Woman mortified after microblading treatment leaves her with ‘monster eyebrows’