Trauma has become a cliche of American cinema, horror in particular. But it could hardly be said the theme has gone out of date. Scott Cooper’s murky but interesting Antlers gives us a double dose, starting with the heroine Julia (Keri Russell) a schoolteacher who has recently returned from California to the Oregon mining town she fled long ago.

Paul (Jesse Plemons), the brother she left behind, has become the local sheriff, maintaining in his abashed way that no one else much wanted the job. With the pair once more living side by side in the house where they grew up, it’s as if nothing has changed since childhood, despite the death of their monstrous dad (Andy Thompson). 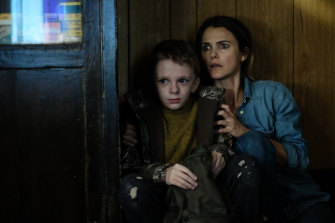 Keri Russell and Jeremy T. Thomas have plenty to be concerned about in Antlers.

The town itself seems stuck in time, though it’s also in a state of visible decay. Coal remains the main industry, with the winding back of environmental regulations announced on a radio that broadcasts nothing but bad news. But the meth and opioid trades are also flourishing; even Paul is hooked on pills of some sort, though Cooper lets us observe this for ourselves rather than making it a major dramatic issue.

Haunted by awful memories, Julia grows increasingly preoccupied with one of her students, Lucas (Jeremy T. Thomas), a fragile, hoarse-voiced 12-year-old who looks at the ground as he speaks. Inevitably, he’s bullied by his classmates – but Julia suspects he’s also being abused at home, presumably by his own father (Scott Haze), a miner who has recently dropped out of sight.

All up, Antlers is a lot less goofy than you’d expect from a horror movie called Antlers, certainly less goofy than it would have been if its producer Guillermo del Toro had directed it himself. The dour tone is reinforced by the muted, shadowy look maintained by cinematographer Florian Hoffmeister, who’s especially cunning about using medium focus to keep us peering anxiously into the distance.

Cooper, who co-wrote as well as directing, remains a hard guy to place: a regionalist who shifts between regions as often as he does between genres. His 2015 Boston gangster movie Black Mass had a lot of horror aspects, thanks to the extremely creepy lead performance by Johnny Depp; conversely, this first official venture into horror is not too far from the spirit of social realist drama.

To be sure, there is a species of monster here (we see events through Lucas’ eyes as well as Julia’s, so we don’t have to wait forever to find out). The veteran Native American actor Graham Greene shows up as a local elder, filling in the mythological background in a likeably weary manner that implies he’s performed the same duty many times before.

Nor does Cooper hold back on the grand guignol element, which Del Toro may have insisted on: blood is slathered across crime scenes like ketchup on a hot dog, corpses are mutilated in ingenious ways. But none of this feels like the heart of the matter – which is admittedly difficult to locate, since beneath its sober surface the film moves in many directions at once.

There’s all the social commentary stuff, including a possible allegory for the resurgence of the coal miners’ disease commonly known as “black lung”. But other details are harder to fit into any larger picture: the weirdly phallic rag doll Lucas carries around, an exchange about the death of God, or Julia showing her class Othello on an old movie projector as if the town had never heard of DVDs.

The strongest thread remains the story of Julia and Paul, brought to life by the contrasting ways the actors make the effects of trauma visible. Russell is gaunt and tense, jumping at shadows; Plemons, with his big doughy face, looks much older than his actual age of 33, and draws on the same gift for portraying emotional incapacity that has made him so effective at playing villains.

“You have no idea what he did to me,” Paul tells his sister evenly, for once getting the last word in a squabble about their father. The camera stays with him as he stands vacantly in a corridor, clutching a disposable cup. That refusal to go further is more unnerving than any of the big death scenes.”

TV, movies, Find out the next TV, streaming series and movies to add to your must-sees. Get The Watchlist delivered every Thursday.

It’s time women learned to be happy, not perfect