Behati Prinsloo is standing by husband Adam Levine amid their relationship scandal.

Last Saturday, the model was seen backstage at The Shaquille O’Neal Foundation’s The Event fundraiser in Las Vegas with the singer.

A new video from Entertainment Tonight shows the couple walking arm in arm through the arena. For the outing, Prinsloo—who is expecting their third child together—wore a long black dress with boots and was spotted cradling her growing baby bump. Levine wore a black button-down, beige pants, and black sneakers.

The Maroon 5 front man was joined by O’Neal to perform the band’s hit “This Love” at the MGM Grand Garden Arena—his first public performance since news broke of his alleged infidelity. 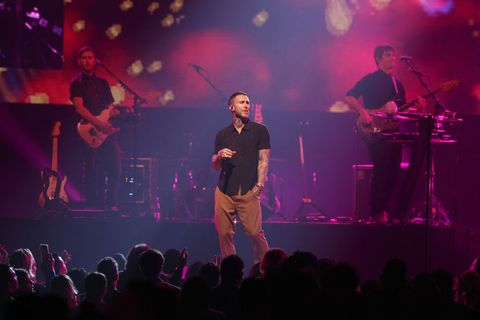 During the show, the Victoria’s Secret Angel sat to the left of the stage and cheered on her husband.

Late last month, two women on TikTok came forward to claim they had affairs with the married singer. Later, Levine’s former yoga instructor made a similar claim, saying he aggressively pursued her.

Following the accusations, Levine released a statement on his Instagram Story, admitting that he “used poor judgment in speaking with anyone other than my wife in ANY kind of flirtatious manner,” but insisting he “did not have an affair.” 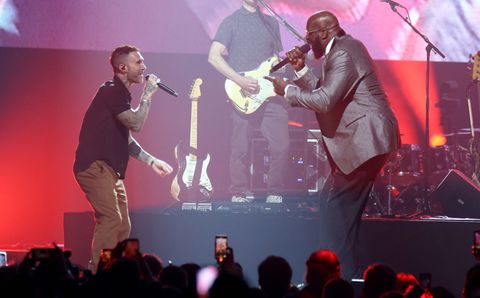 He added that he and Prinsloo—who have been together since 2012 and married since 2014—are dealing with the issue privately and together.

Prinsloo has not spoken publicly of the scandal. She and Levine were photographed looking happy last week while jetting off to Vegas on a private plane.

Framing the city through the lens of a camera