Australia is facing pressure to list all of Islamist group Hamas as a terrorist organisation after a bipartisan inquiry found its military wing could not be separated from its political arm.

The powerful intelligence and security committee urged the government, which already lists the military wing, the Al-Qassam Brigades, as a terrorist entity, to consider expanding the definition to the whole group. 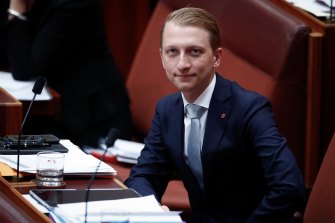 The move could have ramifications for Australia’s consular presence in the Gaza Strip, with Hamas in charge of the self-governing Palestinian territory.

The Australian government has listed Hamas’s military wing for a number of years but has stopped short of proscribing the entire organisation as a terror group.

The Parliamentary Joint Committee on Intelligence and Security tabled a report on Thursday that recommended the re-listing of Hamas’s military wing, as well as Al-Shabaab, Lashkar-e-Tayyiba, Palestinian Islamic Jihad and the Kurdistan Workers’ Party.

The report also urged the government to “give consideration to extending the listing of Hamas’ Izz al-Din al-Qassam Brigades as a terrorist organisation to the entirety of Hamas”.

Liberal senator James Paterson, who chairs the committee, said it was clear from evidence it considered that the whole organisation of Hamas met the definition of a terrorist organisation.

“Currently, the US, Canada and the EU list the whole organisation of Hamas as a terrorist organisation under their respective proscription regimes,” he said. “The expert evidence provided to the committee overwhelmingly rejected the idea that Hamas’ Izz al-Din al-Qassam Brigades operates independently from the rest of the organisation.”

He said there was agreement among committee members that Hamas operated as a singular entity with overlapping personnel, finances and structure.

“In addition, leaders of Hamas have repeatedly made statements which meet the advocacy test for terrorist listing, including direct incitement of acts of violence against Jewish people.”

In its submission to the inquiry, the Zionist Federation of Australia said the military wing could not be separated from Hamas.

“Second, even if the false distinction between the Brigades and the rest of Hamas is maintained, the non-Brigades part of Hamas directly or indirectly prepares, plans and assists in the doing of terrorist acts, through recruitment, procurement of arms and finances, and vocal encouragement for the Brigades,” the ZFA said.

The Department of Foreign Affairs and Trade, which has a small consular operation of about 10 people in Gaza, raised concerns it would need to make changes if all of Hamas were declared a terror group.

Mike Burgess, director-general of the Australian Security and Intelligence Organisation, said he would be supportive of expanding the listing of Hamas but noted it would be of no operational benefit to his agency.

The recommendation comes after the committee in June made a similar recommendation to list all of Lebanese militant group Hezbollah as a terrorist organisation.

How to Increase Your Sex Drive, According to a Neuroscientist