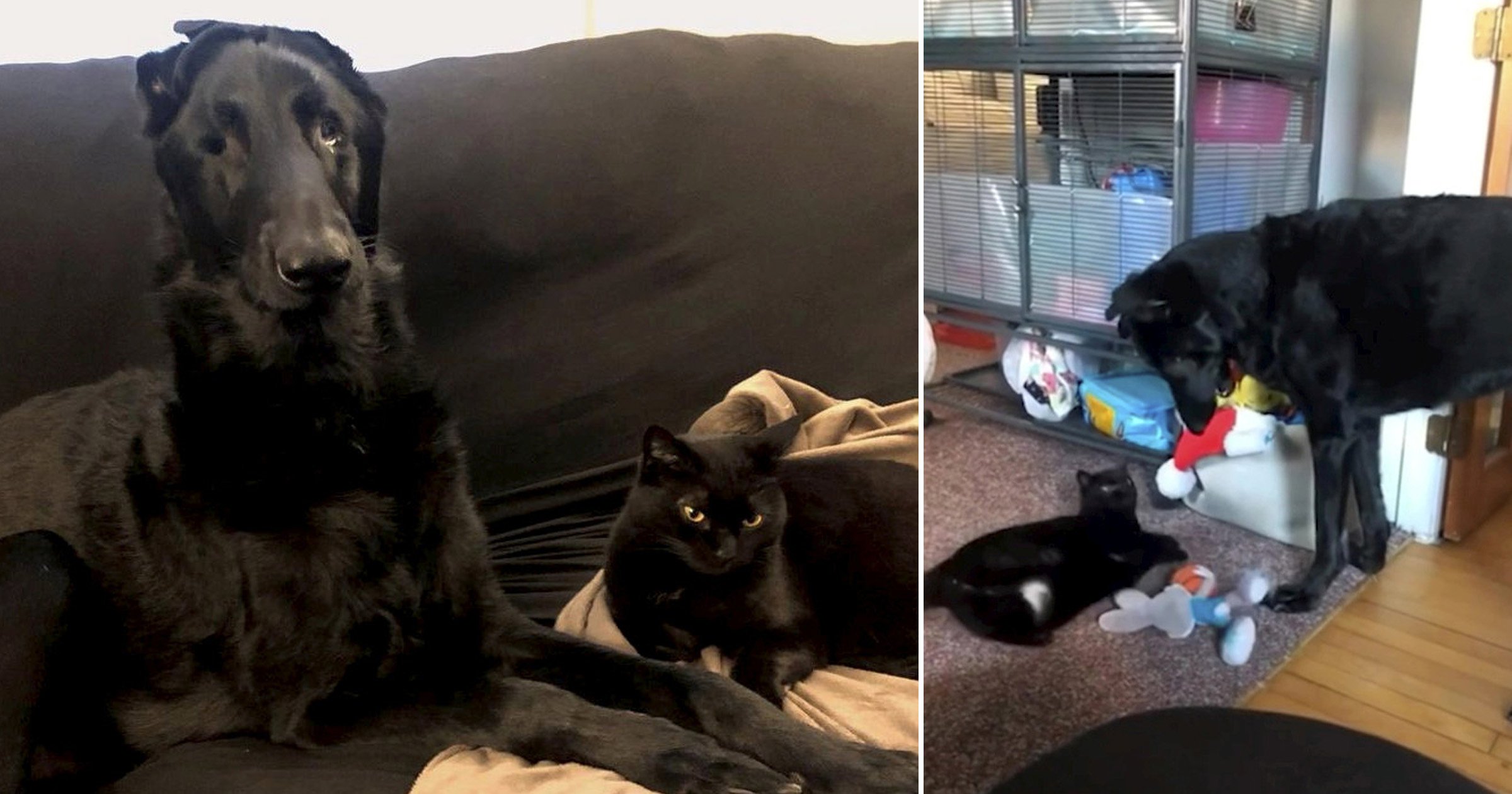 Satin the cat has even found a way to help Blaze navigate the home they share together so that the visually impaired canine no longer steps on his feline sibling.

Blaze went blind in 2020, and since then, Satin has worked out how to use her voice to guide him.

Robin Wagner, 28, adopted German shepherd cross Blaze in 2019, and at his first checkup, vets found the dog had vision problems.

Blaze was diagnosed as blind in one eye and had lens issues in the other that would deteriorate in time.

Vets recommended surgery to try and preserve Blaze’s eyesight, but it wasn’t meant to be, and the dog went totally blind the following year.

Poor Satin first had to get used to being occasionally trodden on by Blaze, but now that she’s worked out how to alert him to her presence, the two are inseparable.

Robin, a preschool teacher from Burlington, Vermont, said: ‘A new creature was all up in her space and even when he could see ran into her a lot.’

Going blind was also a big adjustment for the poor dog.

‘We had to do a lot of work with trainers to help him gain his confidence back.’

Even so, it didn’t take long for the animals to bond.

Robin said: ‘Satin enjoys rubbing herself against his long legs, much like a cat does against a table or chair.

‘Once Blaze totally lost vision though, she was getting stepped on a lot.’

Over time, Robin started to notice something changing in their interactions with each other.

She said: ‘Both the cat and the dog like to hang out in our bed with us. When Blaze would jump up, Satin would go barrelling out of the room before he stomped on her.

‘But over time, we noticed Satin staying in her spot and giving Blaze a nice loud meow. He’d stop himself, and walk around her.’

The black cat evidently learned that, if that worked on their owner’s bed, it would work elsewhere around the house too.

Now, she uses her little chirps and meows to alert him to her presence all over.

Robin said: ‘Every time he’d be walking towards her, she would meow.

‘She’d meow, and he would stop and redirect himself.’

‘Before going blind they were more like ships passing in the night. Now, they take opportunities to acknowledge each other.

‘While she isn’t the most affectionate and cuddliest of cats with us, she for sure tells Blaze she loves him, and it’s the most beautiful thing to see.’

Your Daily Horoscope for Thursday, January 23