Home » Lifestyle » Bluesfest owner Peter Noble: ‘I don’t want to have to sell my event’

In the days since his music festival was cancelled by order of the NSW state government, Bluesfest promoter Peter Noble has resisted the urge to curl up in a ball and cry.

“I haven’t had time to have an emotional reaction,” he says. “You have to immediately act, to contact your team, speak to people, get press releases out. I’m still working through it. I have no idea when it will hit. It may not.”

In half a century working in the industry, Noble – who has been involved in the Byron Bay-based event since 1994 and has owned it since 2008 – has seen a lot of things, including a cancellation last year as the first wave of the COVID-19 pandemic swept through Australia. 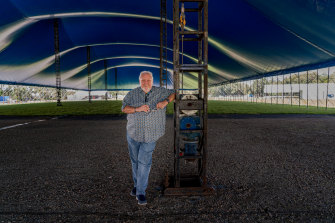 Bluesfest promoter Peter Noble said insurance for Bluesfest this year cost him three times as much as it did for 2020.Credit:Tao Jones/taojonesphotographer.com

This year’s all-Australian event was billed as the first major music festival in the country, perhaps the world. It was to have been a COVID-safe festival, with capacity capped at 16,500 people per day, around half that of a normal year. But on Wednesday afternoon, following the positive result for a local man who was at the Byron Beach Hotel at the same time as the bachelorette party at the heart of one of Brisbane’s clusters, the pin was pulled.

Noble won’t be drawn on whether he thinks that was an overreaction. “I don’t want to criticise [NSW health minister] Brad Hazzard. I’m sure he’s always going to act for what he believes is protecting the public… but it would have been nice to have found that we had other options.”

It’s not that Noble didn’t see this coming. Since the middle of last year he has advocated for a government-backed Business Interruption Fund to enable promoters in the music, theatre, conference and events spaces to restart with the assurance they wouldn’t be left holding the can in the event of a government-ordered shutdown.

Since early last year, insurers have excluded coverage for losses stemming from COVID-related cancellations or delays, which has been a major factor in the slow return of live events. Noble says it is critical that all sides of politics, all levels of government, appreciate the seriousness of this issue to an industry whose annual turnover, pre-COVID, was calculated at $5.6 billion. ”This is a fundamental part of the music industry returning,” he says, “because if something happened the damage that would be done would be inestimable – which it is.”

Noble was covered for last year’s cancellation because he had taken the policy out pre-pandemic. This year he was not.

“We’ve dropped $10-11 million, a day before the festival,” he says. He can’t even begin to estimate the losses suffered by the various suppliers in the region – including the caterers who stocked up in anticipation of feeding 50,000 people over five days, whose food will mostly go to waste – but says there would be “600 or 700 workers on site, 250 just in our bars”.

Noble isn’t alone in having pushed for governments to play the role of insurer of last resort – industry group Live Performance Australia is understood to have presented a proposal for a scheme, costed at $100-500 million over three years, last November – but he says there has been no clear response, despite the federal government introducing such a scheme for the film and television production sector in August.

“In my area [Byron Shire] alone the completion guarantors [who underwrite productions] could see they were covered and therefore put up the money so that Nicole Kidman could shoot [Nine Perfect Strangers], there was another shoot down here for Stan, there’s at least three or four movies occurred here in the last six months,” he says.

According to Screen Australia, which administers the $50 million Temporary Interruption Fund on behalf of the government, 24 film and TV projects with combined budgets of $152 million have taken advantage of the scheme (which covers costs incurred as a result of COVID-related shutdowns, delays or, in the worst-case scenario, failure to complete). Another 17, with combined budgets of $142 million, are in pre-production. To date the fund – to which productions contribute 1 per cent of the sum they wish to insure – has not paid out a cent.

The federal government has given $1 million in funding to the festival via its RISE fund but when asked if there was a chance to underwrite insurance for Bluefest or the sector generally, federal arts minister Paul Fletcher said it was a matter for the states.

Noble is frustrated by the answer.

“Why is he taking that attitude, that ‘it’s not my issue’, when he’s the federal arts minister. It’s concerning because it is partially his issue. Why didn’t he say the film industry should have state-based policies? What’s the distinction?”

Discussions with the NSW government have been more fruitful, Noble says, but there are no guarantees of financial help. “I’m in a position where I don’t know until they tell me.”

There is a possibility that the festival might yet be restaged at a later date, but there is no guarantee it would not still suffer considerable losses. Among other things, it’s likely that not everyone who planned to attend over the Easter long weekend would return at another date.

I could retire. I mean, how many times do you want to get cancelled?

The impact, Noble says, is psychological as well as financial. “It’s about taking all of our confidence away, all of our trust that things will get better,” he says. “It’s all those people [in the industry] going, ‘Do I really want to be an ongoing part of this? I’ve had one gig in a year’, or ‘I’ve been a lollipop man while I waited but I can’t wait forever – I’ve got a family, a mortgage, car payments’. It’s all of that.”

Noble is hopeful a solution will be found that acknowledges the economic and cultural legitimacy of the industry and help it get back on its feet. “I think this is a watershed moment where it’s become apparent that we’re not going to be able to continue as an industry without it. No one’s going to invest.”

But if not, Noble says, he may have to sell the festival he has run for so long, developing it into an internationally recognised and respected – and much-rewarded – brand.

Or, he adds, “I could retire. I mean, how many times do you want to get cancelled?”

He’s not serious of course. He takes such pride in the room full of awards next to his office that turning his back on Bluesfest is close to inconceivable.

“It was one case of COVID,” he says. “I’m not an irresponsible person. We did everything right. I don’t want to have to sell my event, or even half my event, just to deal with this. And why should I?”