‘She can be in my wedding, then, since she’s not pregnant anymore’: Bride-to-be’s heartless reaction to her sister’s devastating miscarriage prompts her groom to CANCEL their nuptials

A heartless bridezilla’s wedding was canceled by her groom after he discovered her cruel reaction to her sister’s heartbreaking miscarriage ahead of their big day.

The woman’s wedding planner shared the story anonymously on the website Not Always Right, explaining that the drama started when the bride-to-be’s sister — and bridesmaid — announced that she was pregnant.

‘The Bridezilla informs her that her pregnancy is inconvenient, and throws a fit at her poor timing because the dress will have to be altered to handle the pregnancy, etc. I flee to another room and shut the door, but they are having it out so loudly I can still hear the fight,’ the person recalled. 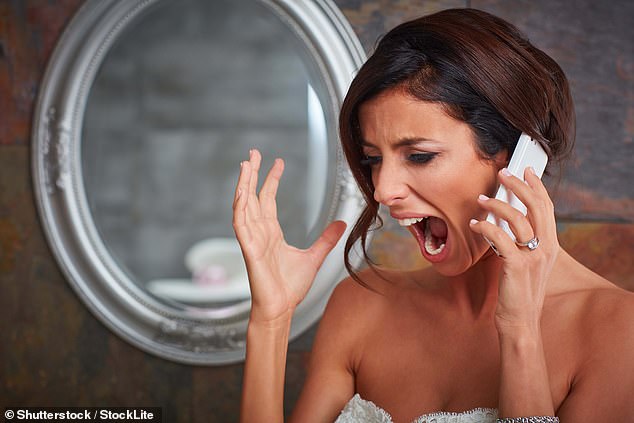 Dealbreaker: A bridezilla’s wedding was canceled by her groom after he discovered her heartless reaction to her sister’s miscarriage ahead of their big day

The wedding planner said the bride’s sister coldly reminded her that she and her partner had been trying to have a baby for three years.

‘While the wedding may be your day, you knew what I was going through to get the chance to have a baby,’ she said.

The bride responded by kicking her out of the bridal party, telling her: ‘Well, then, I guess you can’t be in my wedding, because I don’t want to deal with the problems your pregnancy will cause.’

The wedding planner said the sister ended up walking out, and while she was ‘flabbergasted,’ she put on her ‘best retail face’ and continued with the plans.

A few months later, she was with the bride and her mother when the mom excused herself to answer a phone call.

After spending most of the meeting on the phone, the bridezilla’s mom looked like she had been crying when she came back into the room and told her daughter that her sister had lost the baby. 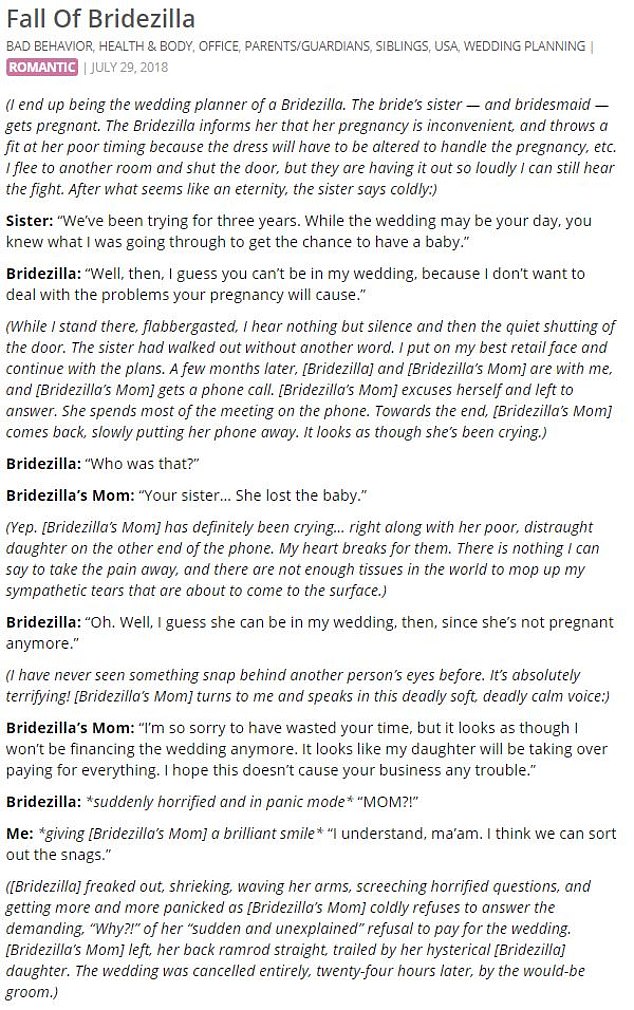 Drama: The bridezilla’s wedding planner shared the story anonymously on the website Not Always Right, explaining the drama started when the sister got pregnant

The announcement confirmed to the wedding planner that the mom has been crying, ‘right along with her poor distraught daughter on the other end of the phone.’

The wedding planner said her heart broke for the family, and while she didn’t know what to say to them, she felt sympathy tears coming on.

The bride, however, didn’t seem to be bothered by the heartbreaking news at all.

‘Oh. Well, I guess she can be in my wedding, then, since she’s not pregnant anymore,’ the bridezilla responded.

‘I have never seen something snap behind another person’s eyes before’ the wedding planner said of the mom’s reaction. ‘It’s terrifying!’

The mom looked at her and told her in a ‘deadly calm voice’ that she wouldn’t be needing her services anymore because she was no longer paying for the wedding.

‘It looks like my daughter will be taking over paying for everything,’ the mom added. ‘I hope this doesn’t cause your business any trouble.’

At this point, the bride started to panic, and the wedding planner recalled her ‘waving her arms’ and ‘screeching horrified questions’ that the mom refused to answer.

‘The wedding was cancelled entirely, twenty-four hours later, by the would-be groom,’ she revealed at the end of the post.

Is YOUR child a bully? Psychotherapist reveals red flags