A consultant becomes flustered as a bride begins to panic over changes made to her dream dress ahead of her second fitting in Say Yes To The Dress Lancashire.

In tonight’s episode of the TLC show, Francine who has been with her fiancé for eight months, is hoping to walk away happy after requesting alterations to her dream gown to give the illusion of a fuller bust.

However, she’s stunned to see how the dress fits once the consultant has added bump pads – and her bridesmaid mocks the look, too.

‘I love the dress but hate the boobs,’ her bridesmaid Kirsty says. ‘It’s almost Dolly Parton.’

Speaking about the moment she met Marcos, Francine explains: ‘He’s from Spain. We had been together for seven weeks when Marcos decided to propose because we’d fallen out. 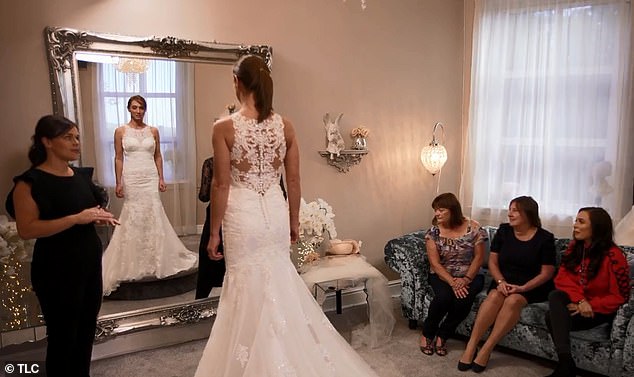 Francine (pictured) attends the second fitting for her dream wedding dress, in tonight’s episode of Say Yes To The Dress Lancashire. Bridesmaid Kirsty (pictured in red) tells Francine that although she loves the dress, it looks almost ‘Dolly Parton’ around the bust area

‘I met him when I was taking my little boy to football. Francis absolutely adores Marcos, and it’s just become a family of three.’

The bride-to-be, who attends her second dress fitting with her mother Lorraine, best friend, bridesmaid Kirsty and her godmother, expresses her desire to have a fitted dress which disguises her ‘small breasts.’

‘I’ve asked them to make my wedding dress seem like I’ve not got really small boobs and that I’ve got really full boobs,’ she says. ‘The dress is really fitted because I’ve asked for it to be really fitted, but now I’m thinking how fitted is “really fitted”.’

As she prepares to try on the amended version, which features padding around the bust area, her mum voices her concerns.

‘She has this idea that she wants to be a busty bride,’ she says. ‘But I’m worried when she looks in the mirror that look won’t be there for her.’ 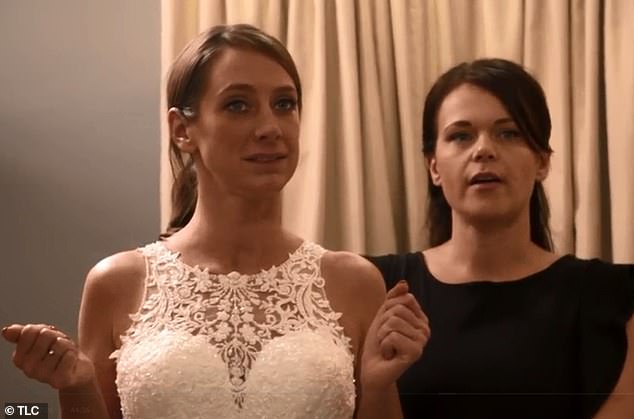 Before stepping out to display the pricey dress to her family and friends, Francine reveals that she hates the alterations.

The consultant tries to ease the situation by urging Francine to put her heels on and show her guests the gown.

Francine, who doesn’t wear heels, begins panicking about walking down the aisle, dancing and greeting people in the shoes. 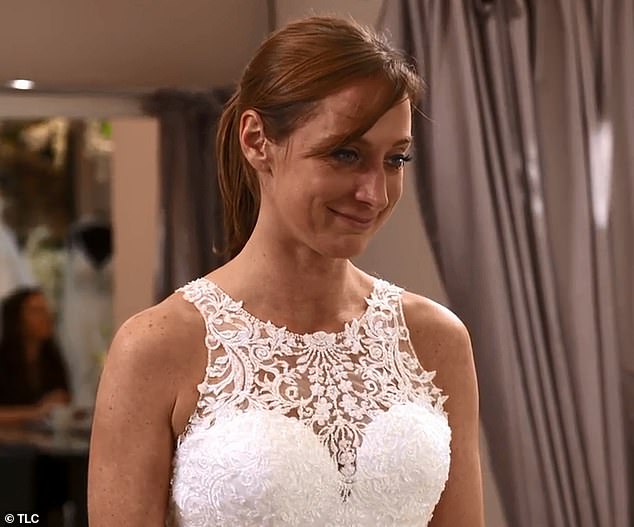 As she expresses her thoughts, her family seem shocked.

‘I don’t like the top bit, it feels funny and I don’t feel comfortable,’ she continues. ‘I feel like my boobs look too big now’.

Francine snaps back as the consultant explains the smallest pads they had available were used to alter the bust area of the dress.

‘Marcos just wants you to look like you, he fell in love with you. I don’t know why you’re trying to change it for your wedding day,’ says Francine’s mother.

Wary of the group’s negative comments, the consultant calls for the seamstress to alter the length of the gown and to remove the pads.

Relieved by the natural silhouette once the pads have been removed, Francine’s entourage express how much they love the completed look.

‘It’s perfect and everything’s fine,’ says Francine, before her mother gives her a bracelet from her childhood.

After receiving Francine’s seal of approval for the dress, the consultant gives the bride-to-be a quick class on gaining confidence when walking in her heels.