All I (don’t) want for Christmas is weedkiller and Hoover bags! Britons reveal the worst and weirdest gifts left under the tree… including out of date chocolates and a TOILET plunger

Ugly Christmas jumpers, shoes that don’t fit, or a book you’ll never read – these are the kind of festive faux pas to be expected each year.

But how about weedkiller, Hoover bags, out-of-date chocolates and shoe polish?

These are among the worst Christmas gifts that have been inflicted on puzzled recipients, a survey reveals.

Proving that there’s always a good reason to write a wish list, an astonishing 28 per cent of us even claim to have received a toilet plunger to celebrate the big day.

Twenty-nine per cent have been given chocolates past their sell-by date. They top the list of the most peculiar Christmas gifts, along with weedkiller (26 per cent) and a wig (24 per cent).

These are among the worst Christmas gifts that have been inflicted on puzzled recipients, a survey reveals

It seems some Britons desperately rifled through cupboards in an attempt to find a last-minute present, with 24 per cent having received a tin of baked beans.

Many presents are far from flattering – 22 per cent have been given spot cream for Christmas.

In fact, 44 per cent of Britons have been lost for words after opening a present because they hated it so much.

And it turns out a poorly thought-out gift can lead to a very frosty Christmas, with over 21 per cent ending up having an argument with the present-giver. 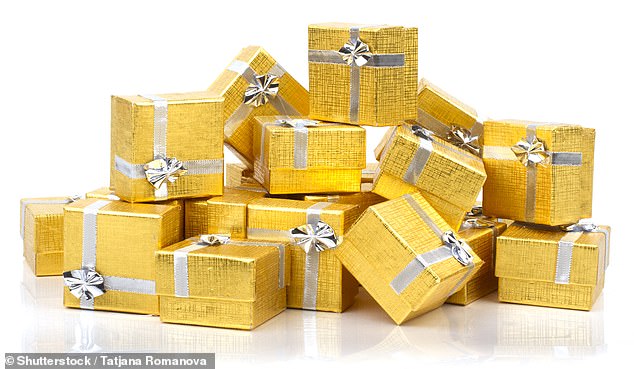 44 per cent of Britons have been lost for words after opening a present because they hated it so much. Meanwhile, 21 per cent ending up having an argument with the present-giver

Three in ten confess they’ve been dramatic when unwrapping a present they dislike – storming off, sulking or bursting into tears.

The festive season reveals whether we’ve been paying attention to our partner’s wishes – the survey showed 18 per cent confess they can’t stand the gifts their other half buys.

It also revealed that 37 per cent of the nation has at least one family member who is the worst at Christmas gifting – with 23 per cent saying that their in-laws are the biggest offenders.

The figures show that on average, we’ll each receive three unwanted gifts this Christmas with one in two of us admitting we’d rather not get anything than something we dislike.

But 24 per cent will simply end up re-gifting it to somebody else.

Tarun Jain from Wish, a mobile e-commerce platform which commissioned the survey of 2,000 Britons, said: ‘It’s quite astounding what people will gift their loved ones.

‘There is clearly a large disconnect between what people want from their loved ones to what they actually receive.’