In this round-up our reviewers critique movies released this week: from big blockbuster to local, foreign and sometimes obscure films that deserve the spotlight. Which ones are worth the cost of a ticket?

What says Christmas better than a violent and graphic slasher film? Imogen Poots stars in this loose remake of the original 1974 Canadian film of the same name, about a killer stalking a group of sorority sisters before Christmas. The difference this time around? We're in 2019, and these women are ready to fight back. With a decidedly modern spin on the classic slasher genre, the film holds up says critic Jake Wilson.

"Is it possible to make a feminist slasher movie? It may depend on how you see the genre: as a chance to enjoy the spectacle of young women being terrorised and sliced up or to explore how it feels to navigate a world filled with dangerous men.

"In any case, writer-director Sophia Takal gives it a red-hot go in her reworking of Black Christmas, an early slasher classic shot in Canada in 1974 by the proudly crass though not unintelligent American director Bob Clark, who went on to invent the teen sex comedy in his 1982 smash Porky’s.

"Black Christmas has been remade once already, in 2006. But Takal's version is up-to-date in a very specific way, starting from the realisation Clark's original premise – a string of killings at a sorority house – offers a direct route into today's version of what were known in the 1990s as the 'culture wars'. After all, who are more likely than young people of university age to discuss subjects such as 'toxic masculinity' explicitly and at length? 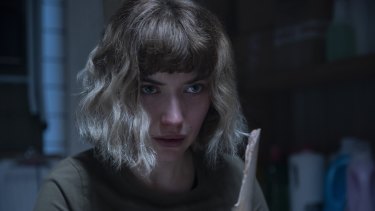 Imogen Poots stars as the heroine Riley in the slasher film Black Christmas.

"A performer as well as a filmmaker, Takal hails from the realm of talky independent US cinema sometimes known as 'mumblecore' and this is, so to speak, a post-Girls slasher, where everyone is alert to sexual politics and even the most chauvinistic frat boys know the right buzzwords to throw around in jest.

"Naturally, qualms are raised about the dubious reputation of the university’s 19th-century founder ('He owned slaves – in the North!'). Naturally, too, there are protests afoot against the resident conservative literature professor (Cary Elwes), an amalgam of culture warrior Jordan Peterson and Giles from Buffy who quotes Camille Paglia and smirkingly defends his choice to teach an all-male canon. All this threatens to veer towards the heavy-handed, but there's enough wit to make it work."

Leonard Cohen was known for his haunting vocals, but his love story with Norwegian woman Marianne Ihlen, which lasted for most of the 1960s, proves as captivating. The pair met in Hydra, Greece, and Ihlen became Cohen's muse, inspiring a number of his songs. Their love faded but the bond never did – it's all explored in this documentary, directed by Nick Broomfield. 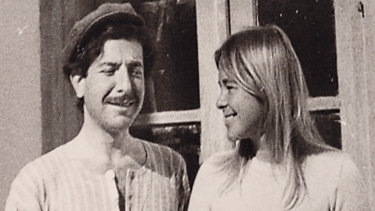 Marianne and Leonard spent much of the 1960s together, their romance inspiring a number of the singer’s greatest songs. Credit:Aviva Layton

"Broomfield's films have often been combative and controversial. Many of his subjects seem chosen to produce sparks – such as his encounter with the white supremacist Eugene Terre'Blanche in South Africa (The Leader, His Driver and the Driver's Wife) or Kurt Cobain's widow in Kurt & Courtney.

"This film is different precisely because Broomfield was a long-time friend of Marianne. His heart is invested, which gives the film a welcome intimacy and warmth. It's probably true to say that Broomfield loves them both – but only one of them from personal knowledge. That makes the film mellow, a tad nostalgic.

"Marianne and Leonard spent eight years together on Hydra, during which she was his willing muse – 'at his feet' as she describes it – while he wrote novels and poetry that few people read. They had a small house and a simple life, in which she did the shopping and cooking, and he wrote. They also took a lot of LSD and speed, trying to enhance creativity. Drugs are the shadow over this lost Eden. As Marianne's biographer Helle Goldman says: 'There was so much freedom there that people went too far with it'."

"Leonard doesn't come through the film unscathed. Long-time fans will have to confront some ugly aspects of his character, but none that he did not himself confront in his own relentless self-examination."

Wrestler-turned-actor John Cena stars in this family comedy about a group of hero firefighters who find themselves up against their biggest challenge yet – looking after three small children. With the kids wreaking havoc on everything around them, the firefighters look to have met their match… and all at the most inopportune time. Keegan-Michael Key and Judy Greer also star. 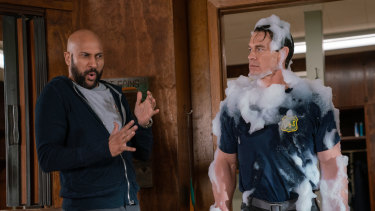 Keegan-Michael Key and John Cena star in Playing with Fire but the film is let down by a wet blanket of a script. Credit:Doane Gregory/Paramount Pictures

"John Cena is team leader Superintendent Jake Carson (usually known as 'Supe'), and I imagine director Andy Fickman and his producers are hoping he can shape up as a comic rival to his fellow pro wrestler, Dwayne (The Rock) Johnson, who has parlayed his gift for the deadpan into such a thriving screen career.

"Cena will be seen in the next instalment in the Fast and Furious franchise and in the Suicide Squad sequel but judging from this performance, he has a long way to go before he can match The Rock's instinct for coming up with well-placed moments of self-deprecation.

"Comedians John Leguizamo and Keegan-Michael Key work so hard at trying to pump some energy into the Supe's fellow smoke-jumpers that you fear for their health.

"And the versatile Judy Greer (Arrested Development) labours through the role of Supe's love interest because the script gives her nothing to do except stand around simpering in the face of his determination not to be distracted by any emotion capable of diluting his alpha maleness."

This much-hyped thriller follows a Chinese ex-pat as he uncovers a series of damaging revelations about the Australian-based mining company he works for. Lives have been lost and it looks like his employer might be involved… but is a classic whistleblower storyline enough to make the movie worth its while?

"A tale of illicit romance, corporate skulduggery, and expensively photographed tourist landmarks, The Whistleblower starts out as the kind of Australian-Chinese co-production – they're growing increasingly common – which is the film equivalent of a glossy in-flight magazine.

"It turns out to be a plus that writer-director Xue Xiaolu, who has a couple of mainland Chinese hits under her belt, isn't as slick as all that. A redeeming element of pop zaniness comes into view as the film evolves from romantic melodrama to conspiracy thriller, with even a brief hint of apocalyptic science fiction. 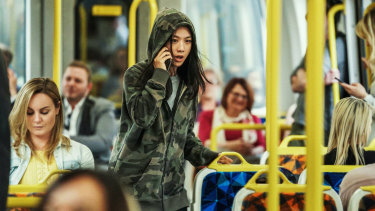 Tang Wei has a mostly thankless role in the Chinese-Australian co-production.Credit:Jupiter Wong

"The result is all over the map, in every sense. But despite the stilted acting and artless expository dialogue, the unpredictable shifts of gear hold attention over most if not all of the lengthy running time."

Playmobil: The Movie is a film about the famous German toys of the same name. It would be easy to assume it plays out like a self-serving PR exercise for the toymaker, but with a veteran Disney animator at the helm, and a kid-pleasing plot – a sister and brother are sucked into an alternate (and surprisingly violent) Playmobil world and need to find their way out – there's a chance this is entertaining enough to silence the nay-sayers. Sandra Hall delivers her verdict.

"Pixar was the first animation studio to give toys personalities and their model is still the one to beat. While the Lego movies have pace, high spirits and a few good jokes, they have never quite erased the impression they are overblown commercials. 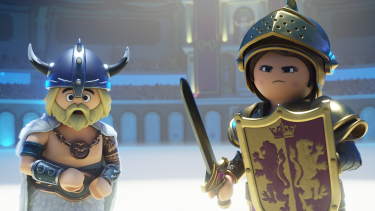 Lead characters Charlie and Marla in their Playmobil form.

"Playmobil: The Movie suffers even more acutely from this complaint. There's a plot in there somewhere, but most of the time it's subsumed by a frenetic attempt to showcase the whole Playmobil range in an extended kinetic eruption of primal sound and primary colour.

"It begins calmly enough with a live-action preamble introducing 18-year-old Marla (Anya Taylor-Joy) and her six-year-old brother Charlie (Gabriel Bateman). She's flourishing her first passport while talking about her hope of persuading her parents she needs to go backpacking for a year before starting college. But it's not to happen. She's about to learn her parents have been killed in a car accident. Four years go by and, when next we see her, she's worn down by the responsibility of caring for an increasingly fractious Charlie, angry she won't let him have any fun.

"The tone changes abruptly after he runs away and she finds he's sneaked into a Playmobil exhibition after-hours. When she follows him, the customary flash of unexplained magic strikes, landing them in a realm occupied exclusively by Playmobil creations."

The bond between father and daughter is lovingly explored in this film set in France's south in 1879. It tells the true story of Joseph Ferdinand Cheval, an introverted postman who decides to build by hand a palace for his daughter, Alice. The end result, named Le Palais idéal (or the ideal palace), remains in place in the Drôme region today, and has become Cheval's enduring legacy – but the build didn't come without its difficulties.

"The Ideal Palace is the story of how Cheval built one of the wonders of France – a fantasy palace 12 metres high and more than 30 metres long, from river stones, fossils, pebbles and shells. He worked on it for 33 years, mostly under candlelight. Cheval claimed he took inspiration from nature – the birds and insects told him what to do – so director Nils Tavernier establishes that strong bond. He also delves into the personal story, to show how tragedy formed much of this "palais ideal", as Cheval called it.

"The film is long on natural beauty and silence, establishing a seductive mood of isolation and quiet, as Cheval (Jacques Gamblin), tramps up and down the mountains with his postbag. The recently widowed Philomene (Laetitia Casta) sees his kindness and strength, rather than his awkwardness. They marry and have a daughter, Alice (Zelie Rixhon). She inspires him to build something grand, both a wondrous place for her to play and a triumph of his imagination.

"The movie is seductively pleasurable, for most of its length. Tavernier corrals the emotions and restricts musical embellishment, concentrating on the powerful landscape and Cheval's life within it. Gamblin's performance is similarly restrained, with a strong sense of the man's turmoil, as well as his kindness. The finale throws some of that out, dipping into sentiment, becoming conventional. That's ultimately an expression of a director's anxiety, a failure to trust we can see, hear and feel all that he intends us to feel. In a movie about a man who trusted himself, that seems an odd failure of nerve."

Supermodel Karlie Kloss on the worst advice she never took: Someone tried to change my runway walk