While Friday morning's blue skies were a bit of sweet relief for Melburnians wrestling with stage four lockdown, a continuous blast of cold air that brought heavy rain and hail earlier this week will bring more storms this weekend.

Blossoms may be inching out of buds and there are large windows of blue skies, but senior forecaster at the Bureau of Meteorology Tim Bolden says a slow-moving mass of cold air is bringing bitterly cold weather up from the southern ocean and will hang around for at least the next few days. 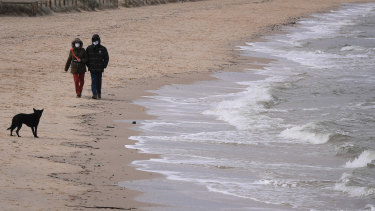 Melburnians at the end of the third week of the six-week stage four lockdown have another burst of cold weather to endure.Credit:Eddie Jim

"We've got a wintry period coming up, starting on Friday there will be showers pretty much each day for Melbourne until Sunday," he said.

The powerful weather system that's hitting Australia's east has been described by some meteorologists as an "Antarctic blob" -and will bring damaging winds to many regions and drop snow over elevated areas stretching from Tasmania to northern NSW.

Mr Bolden said the 'complicated area of low pressure' had come up from the Southern Ocean, transitioned in the Great Australian Bight and was now heading towards Tasmania.

"It’s just very slowly been moving eastwards. It's a clockwise system so it’s spinning cold air on its western flank from over the Southern Ocean and pulling cold air around it.

"So that’s what’s been driving our weather for the last few days and will continue for the days ahead." 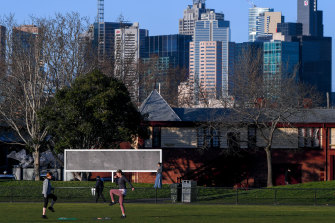 People out for a walk in Edinburgh Gardens on a sunny, but chilly Friday morning.Credit:Eddie Jim

Melbourne is heading for a top of 13 degrees on Friday, but things will feel much colder on Saturday and Sunday according to Mr Bolden.

"Both Saturday and Sunday are looking at tops of 12 degrees, but the top temp will probably only be a very brief peak and the rest of the day be 10 degrees or less and the wind will be coming straight off the water," he said.

As the southerly flow hits Melbourne on Saturday, showers will be more frequent and hail is not out of the question. Mr Bolden said there was a chance of a later thunderstorm both on Friday and Saturday and there's a chance of snow falling at Mt Dandenong on Saturday.

While there will periods of one or two hours which could see up to 10 showers, there will "absolutely" be windows of clear skies in which we can scurry out for an hour of state-sanctioned exercise, according to the forecaster. But you'll have to be quick.

"That’s the nature of showers you have clear skies and then an hour later it's overcast and showers, and you ask 'what happened?'" said Mr Bolden. "It’s a bit of a gamble."

But hang in there Melbourne – if we hold out though a week of temperatures in the low teens, there's a promised top of a comparatively balmy 17 degrees next Thursday.

Michelle Heaton is going live on the OK! Instagram to answer your lockdown questions

My ex is giving me mixed messages – will I get a second chance?