Couple put a BATH in their open-plan living space as part of an £85,000 renovation on Your Home Made Perfect – and viewers were left in hysterics at the unlikely reveal

A couple taking part in a TV home renovation left viewers baffled with their decision to put a concealed sunken bath in the middle of their open-plan living space.

Sylvia and Julian were followed by cameras as they undertook an £85,000 renovation of their cramped two-storey Brighton home on last night’s episode of BBC2’s Your Home Made perfect.

Following the designs of architect Robert Jamison, the couple completely transformed the space – knocking down walls on the pokey bottom floor in order to create a vast kitchen-living-dining room with wrap-around, in-built benches.

The pièce de résistance in the unconventional space was a bath that was hidden under one of the benches. 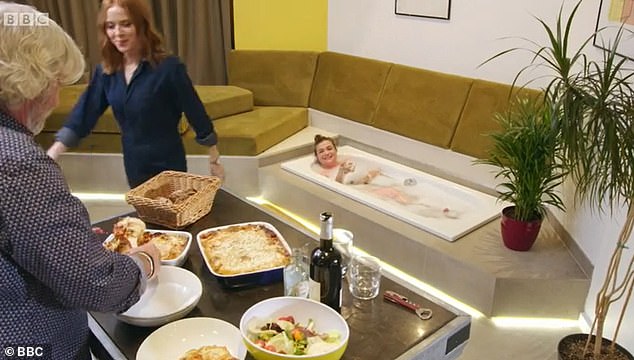 Sylvia and Julian were followed by cameras as they undertook an £85,000 renovation of their cramped two-storey Brighton home on last night’s episode of BBC2’s Your Home Made perfect. The most unusual feature of the property was this sunken bath in the open-plan living space. The episode ended with Sylvia hopping in the tub with a G&T before dinner, pictured

The revelation at the end of the episode left viewers at home in hysterics, with one saying it was the ‘funniest moment’ they had seen on TV in years, pictured

The revelation at the end of the episode left viewers at home in hysterics, with one saying it was the ‘funniest moment’ they had seen on TV in years.

One tweeted: ‘Who wants a bath in the kitchen? #fgs Face with rolling eyes #YourHomeMadePerfect defo needs the female touch but not convinced about the living wall though. @BBCTwo.’

A second wrote: ‘#YourHomeMadePerfect virtual design looked lovely, actual design is a bit hippy. Bath in the room, nope not for me I’m afraid.’

A third added: ‘What? Bench seating, a curtain in the living room a bath in the kitchen! Madness #Yourhomemadeperfect.’ 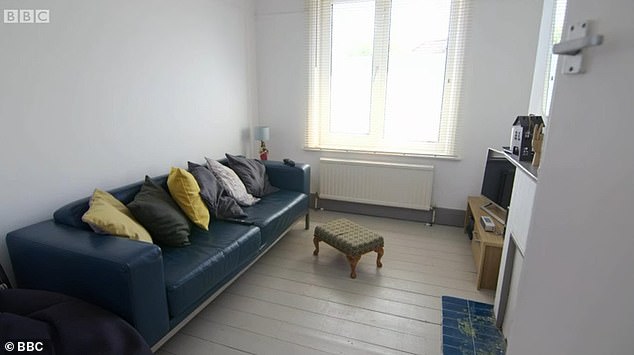 Living room before: Following the designs of architect Robert Jamison, the couple completely transformed the space – knocking down walls on the pokey bottom floor (including this one) 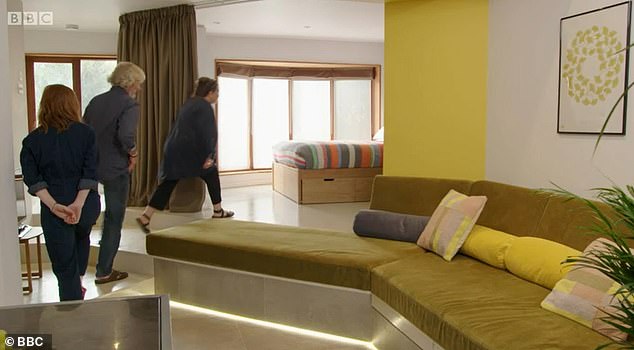 Living room after: The space was opened up and wrap-around seating was added, pictured 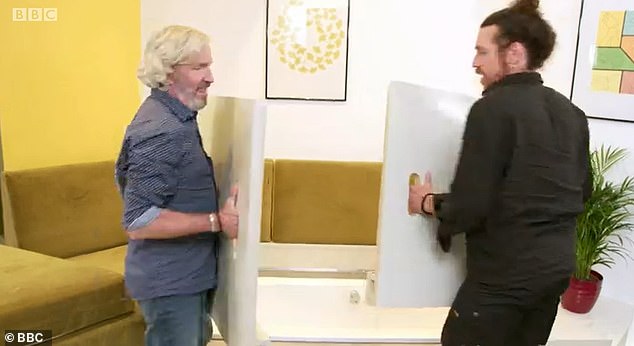 Hidden bath: Underneath the seat there was a sunken bath, concealed beneath panels 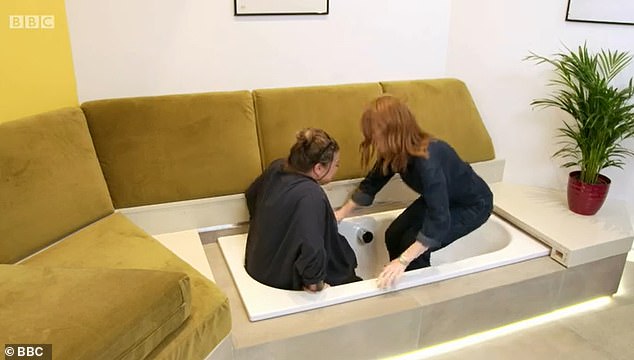 At the start of the episode the couple explain they desperately wanted more space to cook and entertain.

Although they had managed to previously convert their loft, creating two new bedrooms, it came at the cost of a new staircase taking valuable living space  – with the rest of the ground floor remaining a jumble of disconnected, cramped rooms.

Their biggest issue was the kitchen, with the floor width spanning just 50cm, keen cook Silvia was frustrated she didn’t have a proper space.

She said: ‘My parents are from Sicily and for an Italian food is as important as the air we breathe. I love to cook and to  feed people the kitchen is very limiting. It’s the smallest kitchen I think I have ever worked in’.

Viewers were left baffled and tickled in equal measure by the inclusion of the bath, pictured

However, the odd placement of the stairs meant the adjoining room was just the opposite , very spacious but ‘totally wasted’ used as a ‘deposit room for everything else in the house’.

The couple had purchased the home because of its garden, but after four-years, the couple felt ‘weighed down’ by ‘closed house ‘that didn’t allow entertaining guests.

Sylvia and Julian wanted an extension, but were stumped after discovering a planning issue called the 45 degree rule, meaning any extension they had must not block their neighbours light.

They told that Sylvia liked less conventional while husband is more practical, and so to find a solution, the couple were shown two distinctly different plans drawn up by two architects. 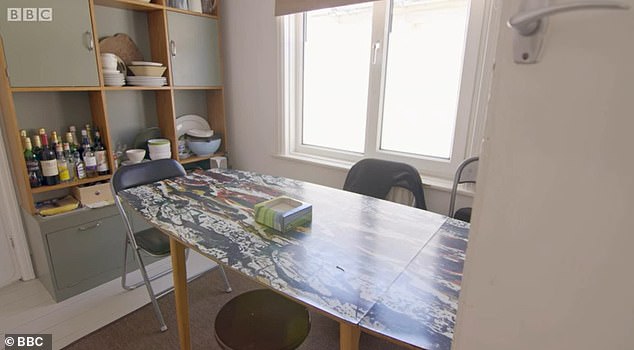 Dining room before: The couple were left frustrated by the small rooms in the property 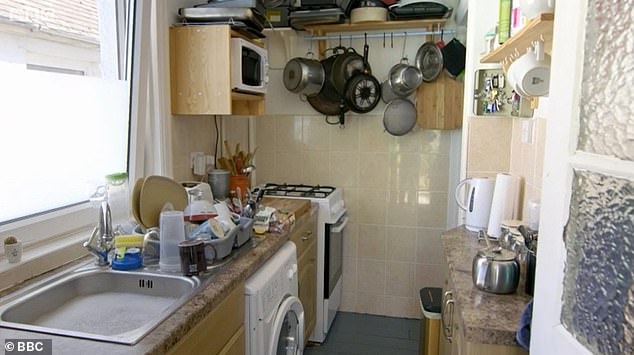 Kitchen before: The kitchen had just 50cm of floor space between counters, as seen above 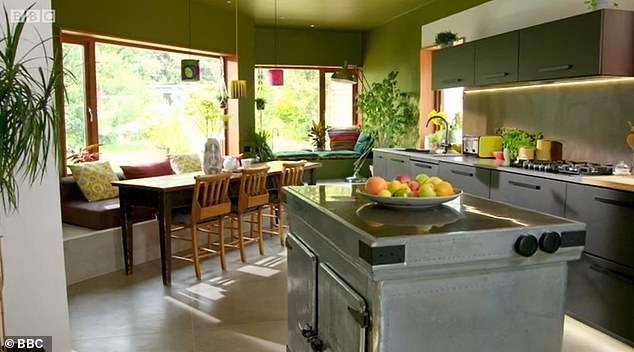 Kitchen-diner after: The family is now able to entertain in their spacious new home

These were presented to the couple in jaw-dropping 3D virtual reality to allow them to form a clear picture of how their home would look after the renovation.

Architect Laura Jane Clark focused on bringing light into the home and created a vast new cooking and entertaining space which brought the couple’s beloved garden right into the house.

Her design retained the ground floor bedroom while adding a walk in wardrobe and ensuite bathroom. The staircase was move to free up space, allowing for a living room that could be opened up or closed off.

But in the end, the couple opted for the design of Robert Jamison, who took the planning rule that had been thwarting their dreams and put it at the heart of his radical design. 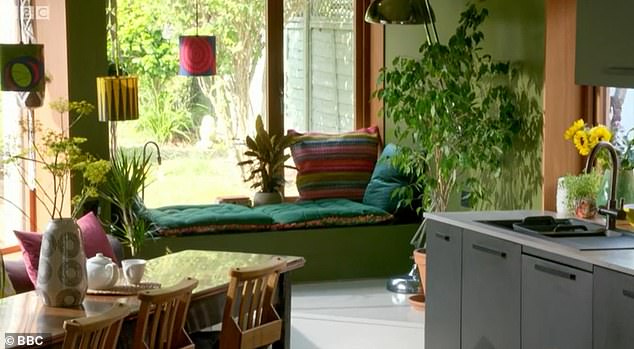 Quiet nook: A window seat created an area for reading within the open-plan space 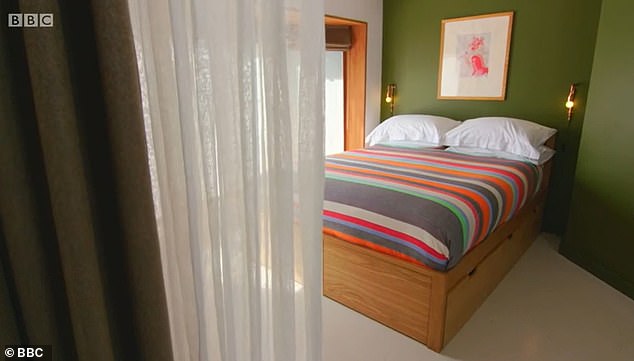 Clean lines: Off the living room there is a double bedroom, with just a curtain separating them

The design that had knocked down every existing internal ground floor walls to get rid of the home’s pokey rooms and added a diagonal extension.

The room eve had a surprising secret quirk, a hidden inbuilt wooden bath in the living room.

The couple both became emotional, tearing up, saying it was ‘one million times’ beyond their expectations.

Justifying their decision, they revealed that the design had impacted on them both ‘so powerfully’.

Sylvia said: ‘It was such a beautiful redesign of a space that we had lived in in such a confined and constrained way. The emotional reaction was really what made it easy to decide.’ 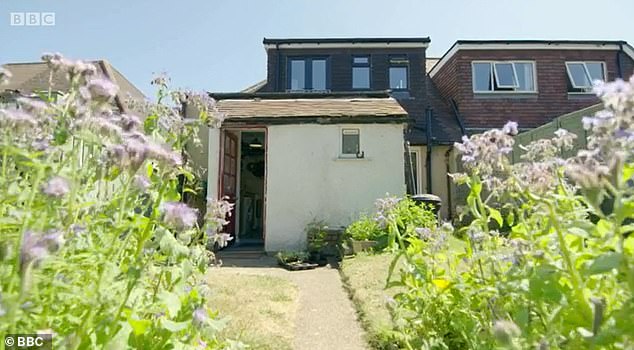 Exterior before: The couple loved the size of their garden but didn’t like their home inside 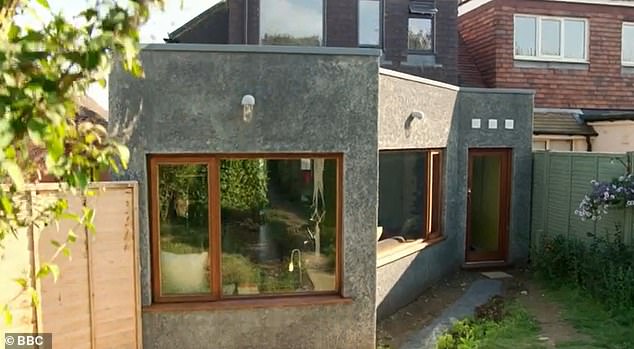 Exterior after: A cleverly-designed extension has given them the layout they so desired

When Robert the property months later, he noted that while the home had the same functions, overlapping the dining room and kitchen and created spaces that ‘bleed into other spaces’.

While they had kept the bones of her designs, they also added their own tweaks, including an Indonesian marble island in the middle of the kitchen

They also ditched the wooden-style kitchen put forward by Robert in favour of a sleek chrome kitchen with a green ceiling that was bursting with colour and personality.