The truth is that I’ve never liked trainers. They are ugly and ungainly. They look very cheap but cost a fortune. They wear out much quicker than ordinary shoes (particularly around the ankle) and can’t be re-soled.

Ordinary shoes are black or brown, so don’t show the dirt. But trainers have white edges and are often white all over. This means that, within a few days, they look old and rotten.

Unlike traditional shoes, trainers absorb the rain, so your socks quickly grow damp. This, in turn, makes trainers smelly.

The very word ‘trainers’ gets on my nerves, too. It suggests that those who wear them are sportsmen training for a marathon or on their way to the gym. This is fantasy. In reality, most people who wear trainers look as though they rarely venture beyond a favourite armchair and a bumper box of Milk Tray. 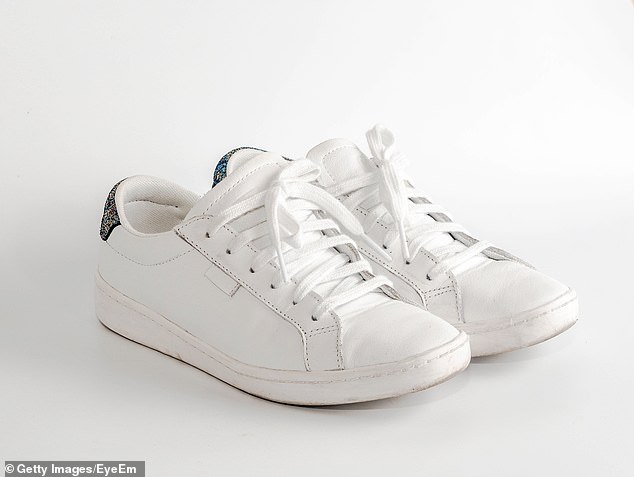 CRAIG BROWN: The truth is that I’ve never liked trainers. They are ugly and ungainly. They look very cheap but cost a fortune (file image)

Recently, Lisa Gordon, the 56-year-old chairwoman of a big city stockbroker, Cenkos Securities, chose to wear a pair of trainers when she went to lunch at the City of London Club, a private members’ club near the Bank of England.

Founded in 1832, the City of London Club boasts on its website that it is ‘the oldest in the city of London and Members may well be proud of its traditions and associations. From its very inauguration it has had a recognised status of character and dignity, which we venture to think it still maintains.’

This is, of course, posh code for: ‘We’re stuffy and old-fashioned, and that’s the way we like it.’

Elsewhere, on the page headed ‘Dress Code’, we learn that ‘gentlemen’ are expected to wear a collared shirt and jacket, but ties are not necessary.

‘On Fridays,’ it adds, ‘the dress code has been relaxed to weekend attire,’ though I doubt this means that members flock in wearing pyjamas, boxer shorts or onesies.

A separate line clearly states ‘denim, sportswear and trainers are not allowed at any time’, adding, in bold letters: ‘It is a member’s responsibility to ensure that their guests are aware of this regulation and are properly attired before they arrive at the club.’

Lisa Gordon’s unnamed colleague clearly failed in his duty to alert her to this rule, or else she wouldn’t have tried entering the club in a pair of £195 ‘flatform’ trainers from Russell & Bromley.

Ms Gordon was wearing a floral dress, which is presumably why the doorman failed to notice her footwear. This meant she had already sat down to lunch with her neglectful colleague before her trainers were spotted.

Less forgiving clubs would have asked her to leave, or forced her into a pair of sensible shoes but, instead, she was simply asked to move to a more discreet corner of the room, near the kitchen, so as to avoid offending other, more law-abiding guests.

But Ms Gordon was not satisfied with this compromise. She is now reported to be furious over the matter, and has vowed never to return.

‘If the City of London Club wants to be relevant to the modern City, it needs to join the 21st century,’ she complained to the Sunday Times. An unnamed friend joined in the attack, harrumphing: ‘She thought this behaviour had died out, but apparently not.’

Her lunch partner is equally incensed, even though it was all his fault. He has sent a letter to the club’s chairman, telling him it needs to modernise.

My sympathies are with the members of the City of London Club. It’s their club, so they can set the rules. If they don’t like the look (or, indeed, smell) of trainers, why should they be obliged to let them in?

Every institution has rules of one sort or another. The men pictured on the Cenkos Securities website all wear dark suits, crisp white shirts and sober ties, except the chairwoman who is tieless. They sport smart, short haircuts and look like characters from the 1950s.

Where are the mullets, the tattoos, the T-shirts, the ponytails, the Lycra, the torn jeans? This suggests that Ms Gordon’s firm has a dress code just as old-fashioned as the City of London Club, even if it does not care to admit it.

The only club to which I belong is much shabbier, but it still makes us all switch off our mobile phones at dinner: if a phone ever rings, the offending owner is obliged to buy a glass of champagne for everyone in the room. It may be painful, but rules are rules, whether we like them or not.