Federal officials have been told to act on an “extraordinary” backlog in visa applications for thousands of skilled workers at a time when employers claim they will have to shut down if they cannot find a solution to chronic labour shortages.

With experts warning of “gridlock” in the visa system, incoming federal ministers have put the backlog at the top of their agenda in a bid to speed up decisions when the number of skilled foreign workers in Australia has slumped to half the number seen a decade ago. 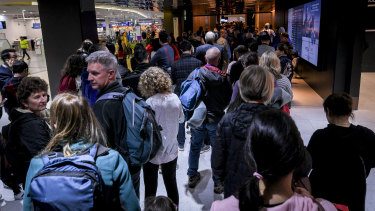 People are waiting months for their visa applications to be processed.Credit:Eddie Jim

Official figures show the number of skilled foreign workers leaving Australia exceeded the number coming into the country in April, highlighting the pressure on the labour market when employers say they are waiting too long to have new visas approved.

Immigration Minister Andrew Giles has asked the Department of Home Affairs to act on the problem as a priority given the concerns put to him by the community before he was sworn into office last week.

But the scale of the backlog is difficult to measure because the previous government did not release figures on the number of applications for the 482 visa for skilled foreign workers or most other visa classes, although other measures have hinted at the growing wait for visa decisions.

“The extraordinary delay in the processing of visa applications has been raised by the community and with the former Liberal government for many years,” Giles said in response to questions from The Sydney Morning Herald and The Age.

“Processing outstanding visas applications is a priority for the Australian government. I have raised my concerns with the current state of visa processing with the Department of Home Affairs, and we are committed to ensuring that visa applications are processed in a timely manner.”

Abul Rizvi, a former deputy secretary in the Department of Immigration, said public data showed the number of people on bridging visas had blown out to more than 300,000 individuals over the past decade, a measure of the number of people waiting in Australia for decisions on visa applications across all categories.

Rizvi said anecdotal evidence suggested there was “gridlock” in decisions on visa applications from people outside the country, such as skilled foreign workers.

“It’s just absolutely jammed and complaints are coming from every direction,” he said.

“Migration agents are tearing their hair out. Because of the way Home Affairs deals with issues, you can’t actually speak to a human being to find out what’s happening. Without more resources, it will remain gummed up.”

Rizvi said 8970 skilled foreign workers arrived in Australia in April but 9230 departed, resulting in a net outflow of 260 workers on the 482 visa category at a time when the country is meant to be opening up and filling labour shortages.

Australia had more than 195,000 skilled temporary visa holders in Australia in June 2014 but only 96,000 in March 2022, an outcome Rizvi blamed on changes under the former government that made visa applications more bureaucratic despite public claims about attracting people to Australia after the pandemic.

Prime Minister Anthony Albanese acknowledged the problem in his public remarks in Jakarta on Monday when he said he believed Australia should be “more welcoming” to visa applicants from Indonesia and other countries.

But the problem is more widespread. Officials are yet to confirm the scale of the backlog and the incoming government is yet to determine whether the solution will require a change to the design of the system, the administration of the rules or the resourcing of the department.

“Greater resourcing is needed to reduce protracted visa processing wait times. The current delays just aren’t good enough when so many businesses are left without staff and therefore can’t afford to stay open,” he said.

“To make the skilled migration system more accessible and responsible, we need to open employer sponsored migration up to all skilled occupations.”

Australian Industry Group chief Innes Willox said employers could pay up to $25,000 for a 482 visa for a skilled worker, making it an expensive process when they could not find enough local workers. He said the previous 457 visa cost about $10,000.

“That might mean hiring fewer workers and missing out on contracts or losing opportunities to grow,” he said.

ACTU secretary Sally McManus said the priority should be to train local workers.

“Under the previous government the visa system prioritised the needs of employers above all else and facilitated the wide-spread exploitation and abuse of temporary migrant workers including systemic undercutting of minimum wages in many sectors,” she said.

“The visa system should prioritise permanent migration aimed at filling genuine skill gaps, paired with a renewed commitment to skills training and ensuring that where local workers can fill a job or be trained to do so, that is always the first option.”

Meghan Markle Inspired Us to Find This Mock-Neck Dress — On Sale!