“I’m not a doctor, but that’s my theory,” said Hamlin, who also recently sought treatment for a Xanax dependency.

Lisa Rinna and Harry Hamlin’s daughter Delilah Belle Hamlin opened up about her secret health battle in a nearly 30-minute video posted to her Instagram page on Tuesday.

Explaining why she’s been kind of “MIA” on social media recently, the 23-year-old shared she’s been going through a litany of medical issues over the past year — and believes the Covid vaccine may have caused a number of autoimmune diseases in her body to “flare up.”

“This is gonna be heavy … I’m gonna start telling my story,” began the model, whose dog could be heard snoring on her bed in the background throughout the entire video.

“So this is scary to do because I was actually asked not to tell my story by someone close to me,” she continued. “Basically in the beginning of the year, I want to say February and March, is when I got my COVID-19 vaccine. And in no way am I saying I’m an anti-Vaxxer because I’m totally not. I just didn’t know enough about it. No one did.”

Shortly after getting her second Moderna shot, she said she started getting bad panic attacks — explaining they were unlike anything she’s ever had before.

“I didn’t realize that the vaccine would cause an autoimmune response in my body that basically flared up and triggered certain autoimmune diseases that I didn’t know I had,” she then claimed — adding that, “This is hard to talk about because I’m just not supposed to talk about it on here.”

Hamlin later clarified that she knows her health issues are “not all from the vaccine,” but are instead “underlying things” she believes the vaccine triggered. “I’m not a doctor, but that’s my theory,” she added, never crediting her belief to any of the many doctors with whom she’s spoken or backing up her claim with any medical support.

Among the issues she’s experienced since the beginning of the year: Migraines, panic attacks, PANDAS (Pediatric Autoimmune Neuropsychiatric Disorders Associated with Streptococcal Infections) and OCD which manifested itself into a fear of eating meat.

Getting emotional as she spoke, she said, “I’m really scared to eat meat. That sounds crazy. Oh my gosh, it sounds crazy … So I started having contamination fear and that’s part of the reason why I lost a lot of weight recently. I’m trying my best to eat, but that’s hard.”

She said she also had a flareup of the Epstein-Barr virus which led to chronic fatigue and body aches, SIBO (or small intestinal bacterial overgrowth) in her gut and five different tick-borne illnesses. “The irony,” she joked, as her mom had a very lengthy and controversial storyline on “Real Housewives of Beverly Hills” involving Yolanda Hadid’s Lyme disease diagnoses. Hamlin said she had actually been in touch with Yolanda about her own experience, has received advice from her and is currently reading Hadid’s book about having Lyme, “Believe Me.”

As she was dealing with all of the above, Hamlin said she also started seeing a psychiatrist to help with her panic attacks — and blamed him for “overprescribing” her with Xanax. She claimed that she also put on the beta blocker propranolol and “overdosed” on it after taking it with Benadryl at the same time. “I ended up in the hospital,” she added. 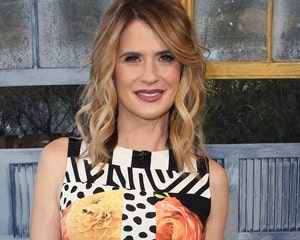 Kristy Swanson Hospitalized with Covid-19: 'Prayers for Me Please'

As the video continued, Hamiln said she was also diagnosed with encephalitis, or inflammation of the brain, which has prevented her from drinking or flying and led to a number of seizures. “My boyfriend was taking me to the hospital, calling ambulances,” she said of BF Eyal Booker, who she called “so supportive” throughout this whole ordeal.

According to Hamlin, she recently entered a holistic treatment facility for her Xanax dependency in Arizona. “I wasn’t like a drug addict, but my body was dependent on it because of how much the doctor had prescribed me,” she said.

While she felt like she was making progress the three weeks she was there and “cut down so much on my Xanax,” she claimed her seizures got so bad she was asked to leave the facility. “Unfortunately, I was I think a medical risk,” she said, explaining that one day her legs “just decided not to work” and she fell, hit her head and got a concussion.

“That’s when they were like, you’re a medical risk,” she said. “They said, ‘We’re not a medical facility. The seizures are scaring us.'”

Wrapping up the video, Hamlin explained she was sharing her story in the hopes others could not only relate to her, but possibly offer up any recommendations for specialists or treatments.

“Mentally I am not great, today,” she added. “I’m feeling hopeless since the last place I went to didn’t really work out. I can look perfectly fine and feel perfectly horrible. That’s just that. That’s something I struggle with mentally, is feeling believed.”

In the comments, Booker wrote, “I love you & know you will get better. Day by day. So proud of you for continuing to fight xxxx.”

TooFab has reached out to Lisa Rinna for comment.

30+ St. Patrick’s Cocktails That Will Have You Feeling Lucky On The Holiday