Home » Lifestyle » Did you spot the crazy Christmas decor in the Home Alone house?

‘The Christmas decorations are just the start!’ Eagle-eyed Home Alone fan reveals the extraordinary lengths the family went to make the house festive (despite going AWAY for the holiday)

Home Alone is one of the most beloved Christmas movies of all times, and nearly thirty years after its release in 1990, some fans are still baffled by the McCallister family’s over-the-top holiday decor.

Claire Reilly, a news writer based in Sydney, Australia, took to Twitter on Monday to rant about the red and green furnishings, wallpaper, and tile that cover the inside of the red-brick home located in Winnetka, Illinois.

‘Can we talk about the McAllister’s [sic] house in Home Alone for a second?’ she tweeted. ‘Like, of COURSE you’re going to be a target for Christmas bandits if your house is ENTIRELY Christmas themed! Okay, yes, they have a lot of Christmas decorations up, but that is JUST THE START…’ 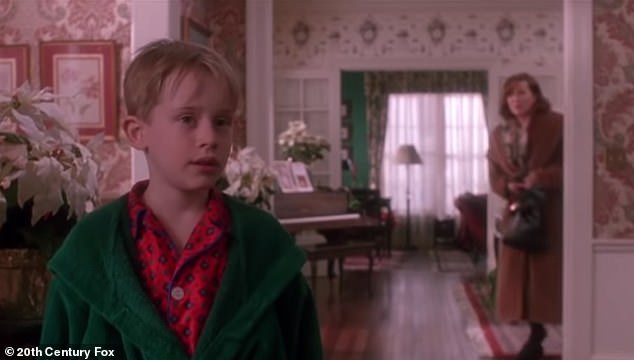 Ready for the holidays: Nearly 30 years after Home Alone premiered in 1990, fans are still talking about the McCallister family home’s over-the-top red and green decor 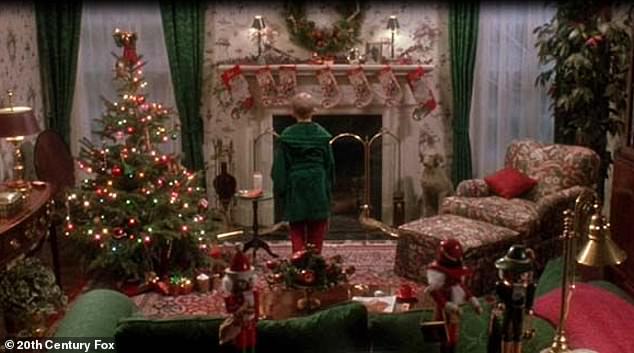 Too much: In addition to the Christmas decorations, the inside of the home features red and green furnishings, wallpaper, tile, and homeware 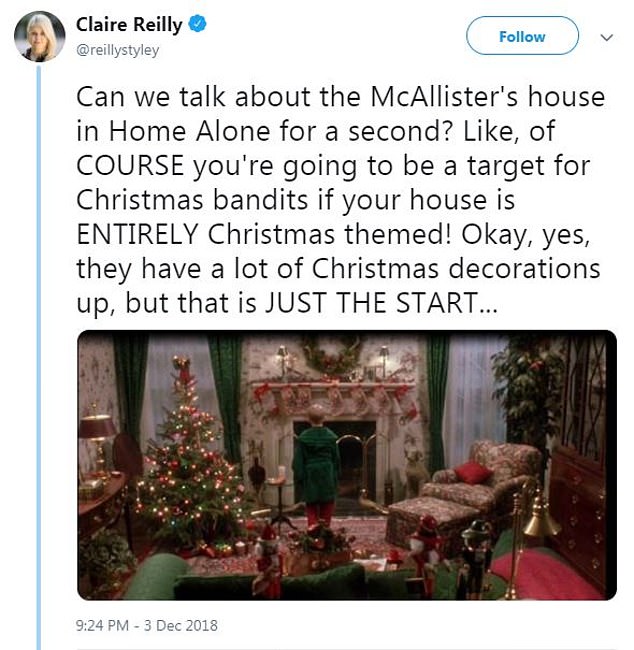 They were asking for it! Claire Reilly, a news writer based in Sydney, Australia, took to Twitter on Monday to rant about the red and green decor in the home featured in the beloved movie

To prove her point, Claire shared a picture of Kevin McCallister (Macaulay Culkin) wearing a green bathrobe and red pajama pants while standing inside his living room, which has a green couch, green curtains, and a red and green patterned chair — in addition to the Christmas decorations.

The Twitter user continued her comical in-depth analysis by posting more photos from inside the home while sharing her disbelief over the excessive use of red and green.

‘Look at that wallpaper. What kind of monster has red wallpaper next to a green wall? Offset with contrasting green house plant and red candles?’ she captioned a second snapshot, which shows Kevin leaving the bedroom in the attic.

Claire posted a second, more close-up shot of the hallway, writing: ‘Throw up a festive green tapestry in the green corridor on the way to your attic, why not!’

In the next picture, Kevin’s mom, Kate McCallister (Catherine O’Hara), is on the phone in her bedroom. 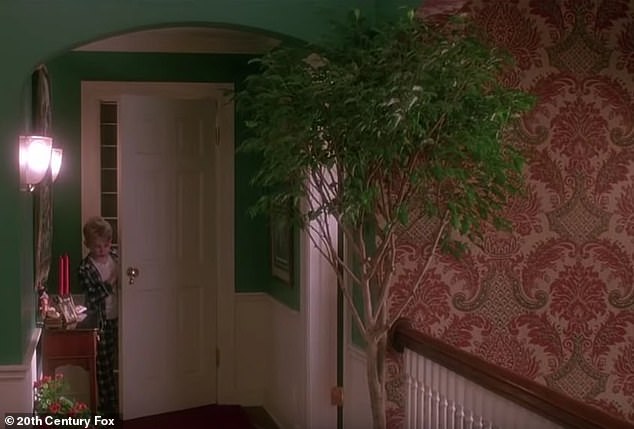 Festive decor: In one photo from the film, Kevin McCallister (Macaulay Culkin) can be seen leaving the bedroom in the attic

Just look: Claire pointed out that there is red wallpaper next to a green wall 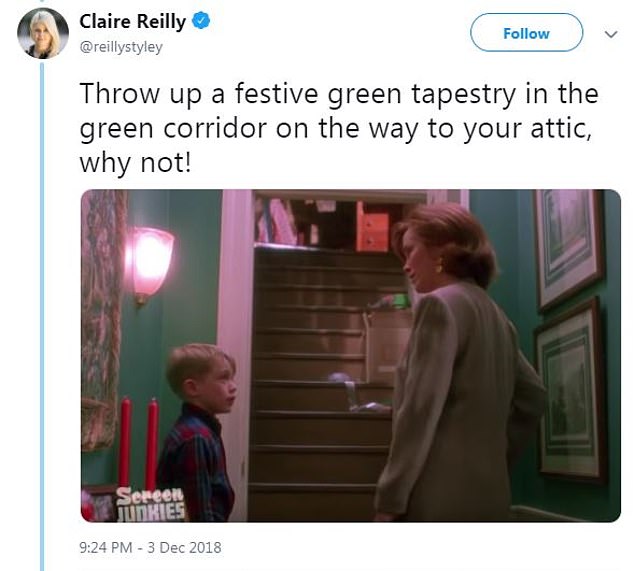 Check it out: Claire posted a second, more close-up shot of the hallway to point out the tapestry 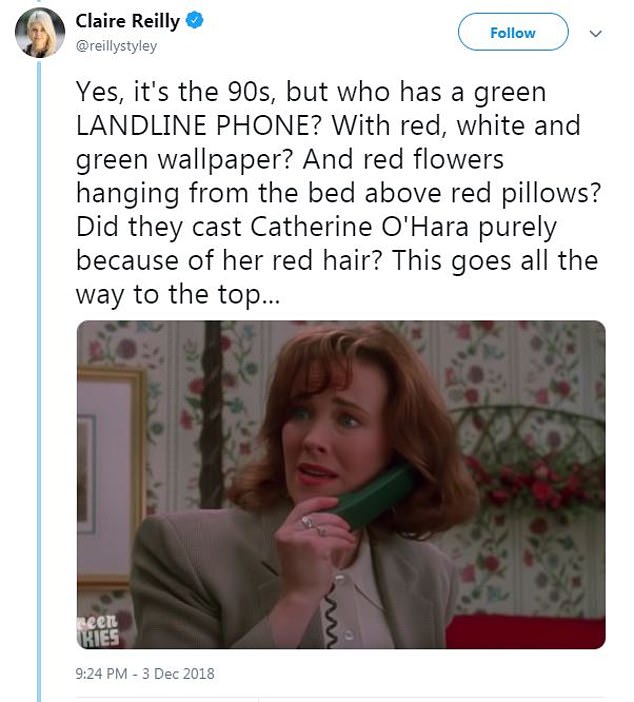 Conspiracy theory: The Twitter user wondered if they cast Catherine O’Hara to play Kevin’s mom, Kate McCallister, just because she had red hair

‘Yes, it’s the 90s, but who has a green LANDLINE PHONE? With red, white and green wallpaper? And red flowers hanging from the bed above red pillows?’ Claire asked.

‘Did they cast Catherine O’Hara purely because of her red hair? This goes all the way to the top…’

Claire also paired her commentary with funny captions as she imagined what the film’s characters were really thinking inside the home.

When posting a snapshot of the burglar Marv (Daniel Stern) leaning over his partner Harry (Joe Pesci) with a crowbar in his hand, she wrote: ‘Why is there so much Christmas theming, Harry?!’

Another photo, which depicts the moment Kevin’s mother returns home, she tweeted: ‘I have been here for three days by myself and I’ve finally worked out why you let them film a Christmas movie here… 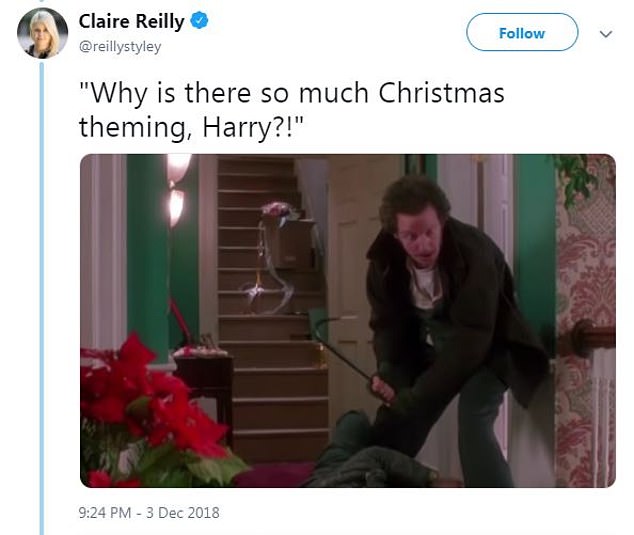 Marv: Claire also paired her commentary with funny captions as she imagined what the film’s characters were really thinking inside the home 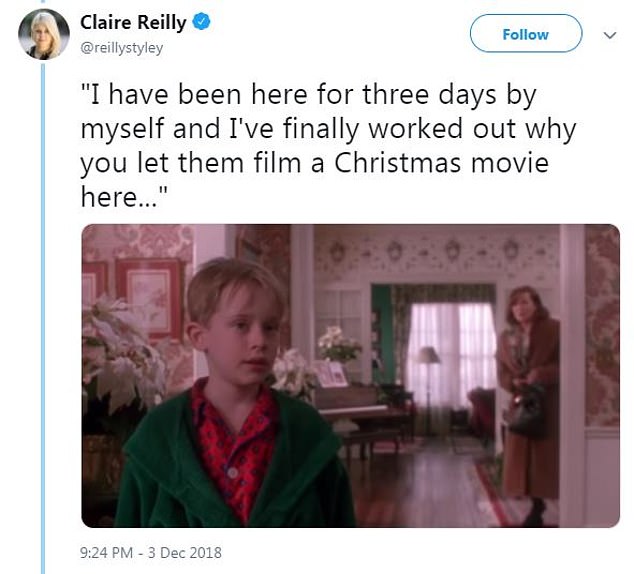 Going beyond the decor! Kevin is wearing red pajamas and a green bathrobe when his mom returns home 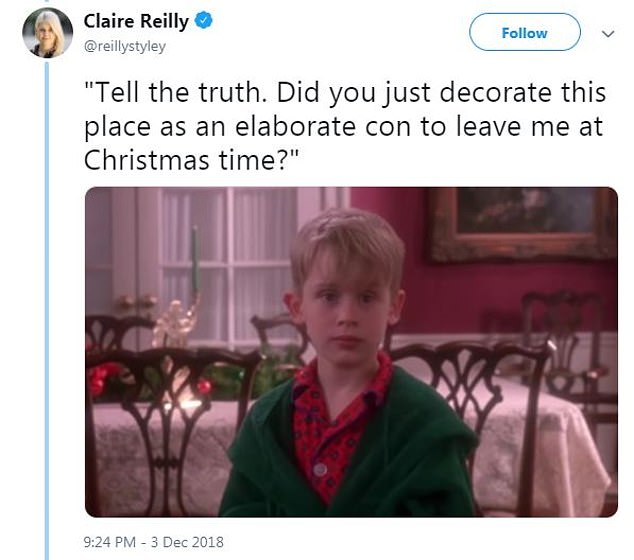 Thinking about it: Claire joked about Kevin wondering it the decor was all an ‘elaborate con’ to leave him over the holiday

‘Tell the truth. Did you just decorate this place as an elaborate con to leave me at Christmas time?’

Out of all the red and green rooms, there was one that offended Claire the most.

‘But WORST of all is the kitchen,’ she explained. ‘Red pots, green tiles, red teapot, crimson floors, even a green rolling pin.

‘Guys. We all go to the themed sections of IKEA and get ideas, but you’re not supposed to do it in real life. Home Alone: Great movie. Decorator’s nightmare. Fin.’

Although she claimed to finished, she couldn’t resist sharing the picture of Kevin in his living room for a second time. 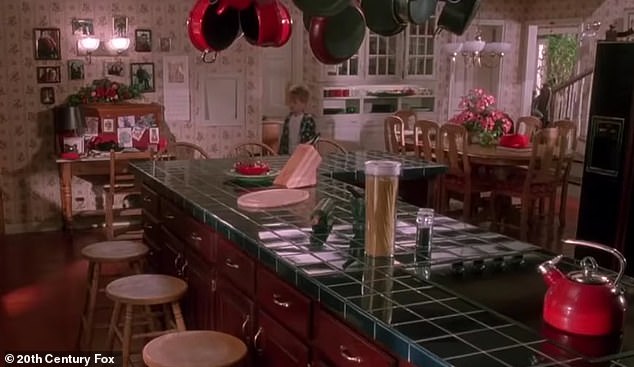 A lot going on: Out of all the red and green rooms, the kitchen was one that offended Claire the most 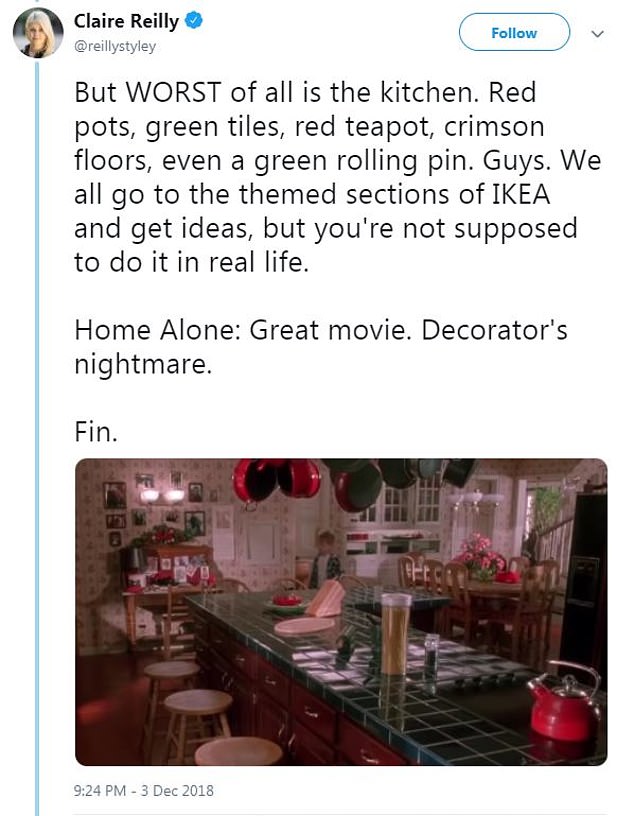 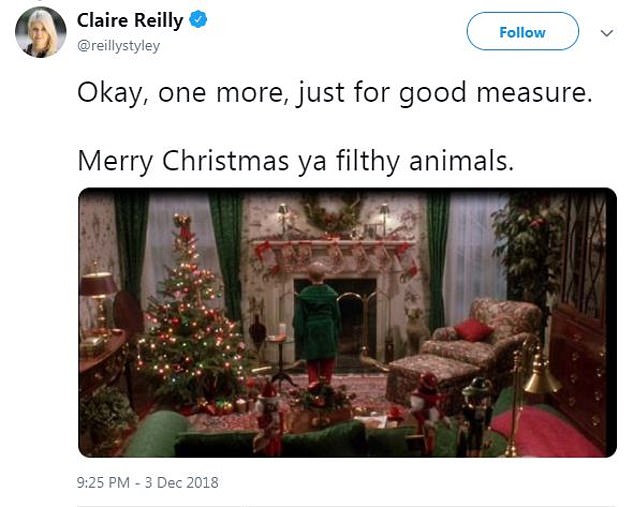 One more: She ended the thread with one of the lines from the film, writing: ‘Merry Christmas ya filthy animals’ 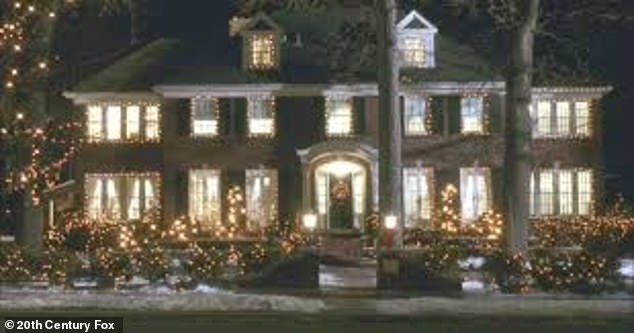 Impressive: The McCallisters’ red brick home, which is located in Winnetka, Illinois, was also decorated with lights — even though they were spending the holiday in Paris

Claire’s rant inspired plenty of comments, ranging from people who agreed with her to fans who admitted that they never noticed the home’s decor before.

‘It’s Hollywood…the whole point of the film was to load it with a Christmas vibe, even at a subliminal level,’ Matthew Davies wrote. ‘Change all the red and green to blue and yellow and the film loses its Christmassy cosiness. Of course red and green were going to be crow barred into ever scheme.’

A man named Paul joked: ‘Kevin puts the Christmas decorations up himself. Go easy on the 8 year old Claire.’

‘I love that this was retweeted into my feed, because I have been obsessing on this fact since I was a kid!’ a woman named Erin responded. ‘Did you notice the Xmas colours also extended to the wardrobe?

TWITTER REACTS TO THE RED AND GREEN DECOR IN HOME ALONE 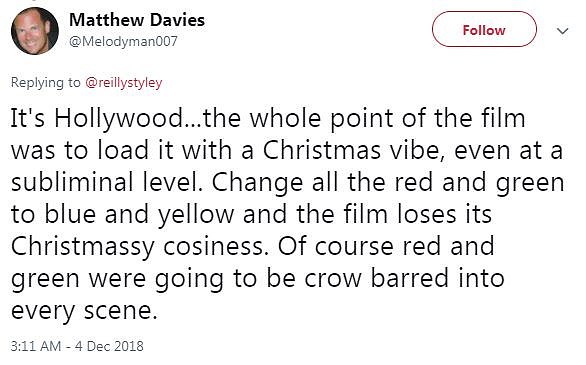 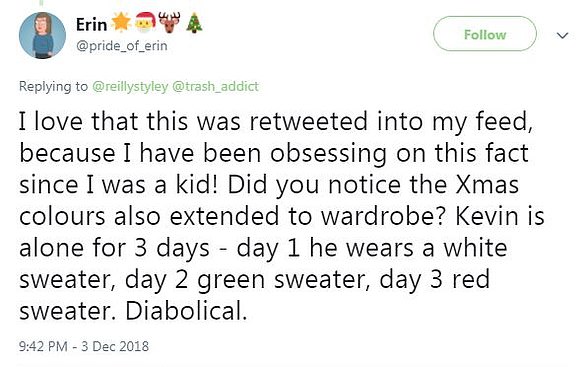 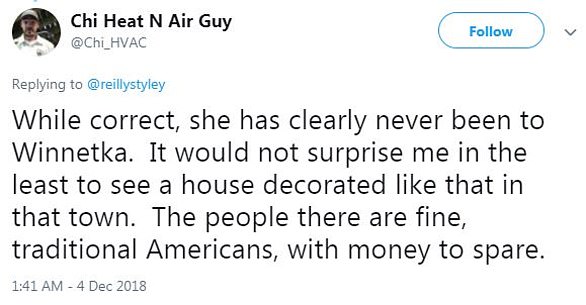 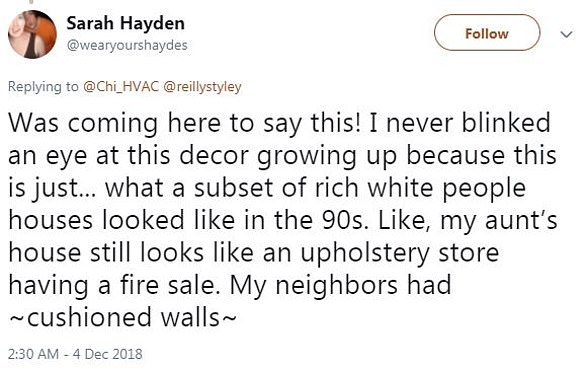 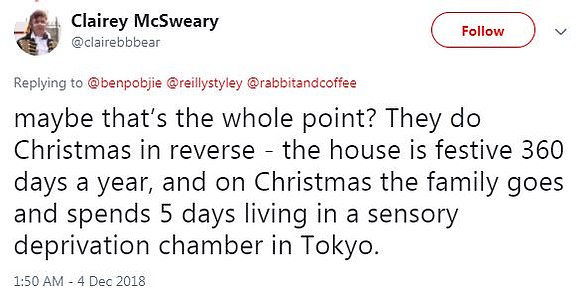 Some people thought the decor was normal for that particular Chicago suburb in the 1990s.

‘While correct, she has clearly never been to Winnetka,’ one man wrote. ‘It would not surprise me in the least to see a house decorated like that in that town. The people there are fine, traditional Americans, with money to spare.’

‘Was coming here to say this!’ Sarah Hayden added. ‘I never blinked an eye at this decor growing up because this is just… what a subset of rich white people houses looked like in the 90s.

‘Like, my aunt’s house still looks like an upholstery store having a fire sale,’ she admitted. ‘My neighbors had ~cushioned walls~.’

Then there those who couldn’t get over the fact that the McCallisters spent so much time decorating their home for Christmas when they knew they would be spending the holiday in Paris.

‘Always wondered why they bothered with that much decoration, they were going away for Christmas!’ one person noted.

‘That bothered me, too — especially because they weren’t going to be home for Christmas!’ Meredith Hines-Dochterman commented. ‘No Wonder they forgot a kid; they’re exhausted from unnecessary decorating!’