U.S. officials announced federal charges on Tuesday against three Mexican nationals “suspected of trafficking huge quantities of illicit drugs for the Sinaloa Cartel” into southern California. U.S. Attorney for the Southern District of California Robert Brewer called the arrests, along with the seizure of $3.5 million in cash and a significant haul of cocaine, fentanyl and large-caliber ammunition, a success in efforts to “eradicate this threat to San Diego and our partners in the Republic of Mexico.” 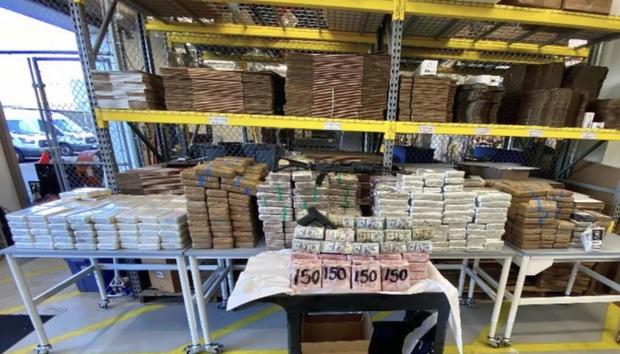 DEA Special Agent in Charge John W. Callery called the operation a “blow to the Mexican Cartels operating in San Diego,” pointing to the seizure of 20,000 rounds of “dangerous .50 caliber ammunition and over $3 million in drug proceeds that they have gained through selling death here in our community and throughout the US.”

The three Mexican nationals, two of whom were listed as residents of Tijuana, Mexico, and one of Chula Vista, California, were charged in a California federal court on Tuesday. The U.S. Attorney’s Office said they would be transferred into U.S. federal custody from a San Diego jail and would appear this week before a federal judge in California.

Agents found the $3.5 million in U.S. currency, about three quarters of a ton of cocaine, 53 pounds of fentanyl, the .50 caliber ammunition and hundreds of body armor vests at a truck yard in the Otay Mesa area of San Diego on November 20, according to the U.S. attorney’s office.

The Sinaloa Cartel is one of only two Mexican crime organizations still thought to maintain a cohesive central power structure after years of infighting among the gangs. It was led for years by the notorious kingpin Joaquín “El Chapo” Guzmán, who’s now serving a life sentence at a supermax prison in Colorado. Based in Mexico’s Pacific coast state of Sinaloa, the cartel has a presence across much of the country.

The cartel survived an apparent power struggle after Guzmán’s extradition to the U.S. and is today believed to be led by El Chapo associate Ismael “El Mayo” Zambada and Guzmán’s sons, known as “los Chapitos” or “the little Chapos.”

The arrests announced on Tuesday were part of a five-year investigation that the U.S. attorney said had thus far resulted in charges against more than 125 people, with “a significant impact on the worldwide operations of the Sinaloa Cartel.”

How my relationship survived lockdown – just