Environmentalists have criticised the territory government’s proposed bill as allowing “production by stealth”. They say the gas industry would be able to use or sell methane obtained during “appraisal” activities without needing to secure a production licence or negotiate with traditional owners and pastoralists. 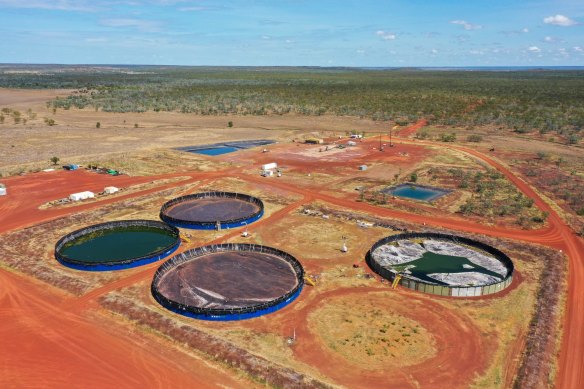 An exploratory gas well on Tanumbirini Station in the Beetaloo Basin in the Northern Territory.Credit:Justin McManus

The government says the law change would allow companies to use appraisal-phase gas to power local communities, rather than having it vented or burnt at the point of extraction.

Barrister Greg McIntyre, who represented Mabo in the historic High Court win that overturned the doctrine of “terra nullius” and recognised land rights of First Nations people, said the approval being sought under the proposed legislation would be a “future act” within the meaning of the Native Title Act.

This means traditional owners should have a right to negotiate, and if these provisions were ignored then any application to mine for gas would be invalid.

“I suspect that the lightbulb hasn’t turned on and … the government hasn’t obtained advice about whether it might impact on the Native Title Act,” McIntyre said.

About 70 per cent of the shale gas in the territory is believed to occur in the Beetaloo Basin, about 500 kilometres south-east of Darwin.

Hydraulic shale fracking involves injecting large volumes of water, mixed with sand and chemicals, into sedimentary shale rock at high pressure, creating fine cracks so that gas flows into the well. Only a portion of the “flowback” water and chemicals return to the surface. Sometimes these can be reused but otherwise they must be stored, treated and removed.

Lawyers for the Nurrdalinji Native Title Aboriginal Corporation, which represents native title holders from across the Beetaloo Basin, have written to Northern Territory Chief Minister Natasha Fyles, asking her to reconsider the proposed legislation.

The chair of the corporation, Gudanji-Wambaya man Johnny Wilson, who lives at the Lightning Ridge outstation, said he was shocked the government might change the rules to allow gas companies to do large-scale mining on his Country without traditional owner consent. 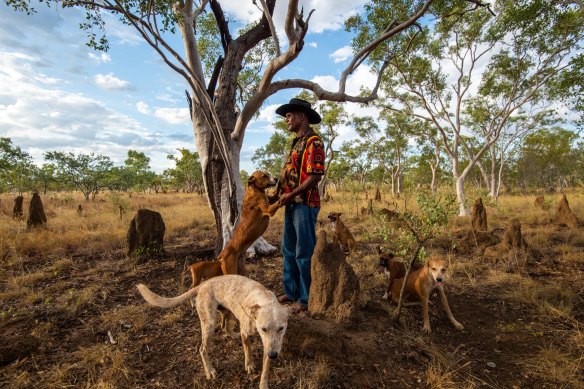 Johnny Wilson at home with his dogs.Credit:Justin McManus

“Gas companies didn’t explain what fracking is or the damage it can do to our water, sacred sites, plants and animals,” Wilson said. “We now know there’ll be four to five hundred wells and pipelines running across our Country.

“These exploration agreements which were signed by our elders with very little information provided, are now set to become the hook, line and sinker for large-scale industrialisation and production.”

Environment organisations, including the Environment Centre NT and Original Power, have also written to the chief minister, saying that while the government claims the proposed legislation takes into consideration the findings of a recent scientific inquiry into hydraulic fracking in the territory (known as the Pepper Inquiry), it directly contradicts the inquiry’s concerns about “exploration creep”.

The inquiry found shale gas development in the territory could result in about 100 million tonnes of emissions annually.

The inquiry also found that if all its 135 recommendations were implemented, “the challenges and risks associated with any onshore shale gas industry in the NT can be appropriately managed”.

“The bill does not achieve the intended purpose of key Pepper Inquiry recommendations, and claims to the contrary are misleading to Territorians,” the environment groups told the chief minister. “Unless amended, this bill will not lead to the effective and transparent regulation of the onshore gas industry.”

The gas industry says similar approaches are in place in other jurisdictions, and peak body the Australian Petroleum Production and Exploration Association has welcomed the change.

The Northern Territory government has been contacted for comment.

Get to the heart of what’s happening with climate change and the environment. Our fortnightly Environment newsletter brings you the news, the issues and the solutions. Sign up here.