Home » Lifestyle » Elvis Costello is my music idol. Could I meet him and keep my cool?

Most of the time I try to keep some semblance of professional distance when I’m interviewing someone. Even when that someone is Pete Townshend, Paul Weller, Joe Strummer or Lou Reed.

But this is different. It starts with a girl, as these stories often do. Specifically, an English girl I’d met in early 1978. We bonded over our love of the Beatles and Roxy Music, but she kept going on about some speccy dude named Elvis Costello. One Friday afternoon she handed me a bag containing his first two albums. “Listen and learn,” she said. 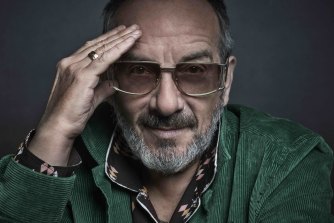 Elvis Costello says he has “a face for radio”. Credit:Mark Seliger

By Monday morning, I was a convert and a totally different person. I not only became besotted with Costello’s incredible wordplay (“like a chainsaw through a dictionary” as he’d later put it in song), his killer melodies and his nervy post-punk/new wave sound, but with the fact that he didn’t look anything like a rock star.

Today I play in a band called Radio Radio, named after a Costello song. Our repertoire contains a whole set of his songs, and I play a Fender Jazzmaster guitar because that’s what he’s holding on the cover of his debut album, 1977’s My Aim Is True.

Costello no doubt has to suffer bald middle-aged men salivating all over him and telling him they’re his greatest fan all the time. I’m too cool for that.

Actually, no, I’m not. Because as soon as we’re hooked up via Zoom to talk about his latest album, The Boy Named If, I relate all of the above to him in the opening minute of our conversation. He kindly doesn’t run for the nearest exit, says he’s flattered, and then starts talking about his own teenage fandom for Nick Lowe, the man who would go on to produce Costello’s first five albums.

“You could go up to his band, Brinsley Schwarz, in a bar and introduce yourself to them,” he recalls. “They had success, but they weren’t inaccessible and living on a cloud. They were very down-to-earth, regular guys. That always stuck with me.”

He remembers deciding at the age of 17 that he wanted to be a songwriter for the rest of his life, “but I mostly auditioned for publishers, not record companies because, well, look”. He points to his face and offers a wry smile. “This is a face that’s not very obviously a pop star. It’s a face for radio, as they say.”

Costello’s two defining characteristics over the years have been stylistic restlessness and breathless productivity. Although he was signed to the punk-era Stiff label and became a new wave icon, he quickly veered in different directions, from the country of 1981’s Almost Blue to 1980’s soul-infused Get Happy!! Later he collaborated with artists as diverse as the Brodsky Quartet, Burt Bacharach, Allen Toussaint and Paul McCartney. 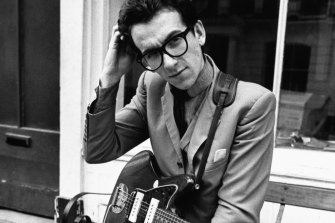 Elvis Costello in 1977, the year his first album, My Aim Is True, was released.Credit:Getty Images

Even at 67, he’s never been a heritage act who relies on his back catalogue. And while many artists have lamented a creative stasis during COVID, Costello’s last 18 months have been a flurry of activity. In March 2020, he cut a tour short and retreated to a holiday cabin on Vancouver Island with his wife, jazz singer Diana Krall, and his twin sons, Dexter and Frank, who recently turned 15.

And he got down to work. He released his 31st album, Hey Clockface, in October last year. This year he recorded a 96-minute spoken word piece for Audible called How to Play the Guitar and Y. Although he does discuss the guitar and the horrors of learning the F-chord, it’s actually a rumination on the nature of music itself, and he emphasises the importance of treating it as a joyous thing that connects us with the innocence and willingness to experiment that we had as children.

As well as working on a mammoth deluxe edition of 1979’s Armed Forces album, which includes many live recordings from the era, including the infamous 1978 “Riot at the Regent” concert in Sydney when a cranky Costello quit the stage less than an hour into the show, he collaborated with Hispanic artists to make Spanish Model, an inventive reimagining of 1978’s This Year’s Model.

And this week Costello releases The Boy Named If. His 32nd record is a concept album of sorts about the uneasy journey from childhood to adulthood. It’s his rockiest record in some time and remarkably cohesive considering he and the members of his band, the Imposters, recorded their parts separately in three different countries – Canada, the United States and France. He also wrote a short story and created a picture (under his artistic pseudonym, Eamon Singer) to accompany each track, which will be included in a limited-edition book.

He has suffered setbacks of late. His beloved mother died in January at the age of 93. “The last time I saw her was when she attended opening night of my last tour in Liverpool. So I’m now the senior member of my family.”

Three years ago he was diagnosed with prostate cancer, “but I don’t use words like cancer battle or survivor because I’ve lost many close friends who had mortal fights with the disease, and I had successful surgery that meant I avoided serious illness”.

Talk turns to his late father, Ross McManus, a trumpeter and big band vocalist who had a Top 20 hit in Australia in 1970 with a cover of the Beatles’ The Long and Winding Road, under the name Day Costello. Costello recalls going to the movies in Leicester Square with his dad that year to see the Beatles documentary Let It Be. Father and son both walked out depressed.

“I was watching my favourite group breaking up before my eyes,” Costello says. “So, getting to see the new Peter Jackson documentary series was such a joyful experience. It was wonderful to see the most famous group in the world do what everybody does in music, which is to will something into existence by singing nonsense words or changing the tempo and not having any self-consciousness about that. I deliberately watched the series slowly because I didn’t want it to end.”

He shakes his head and rubs the stubble on his chin.

“And then after going through all that to make Let It Be, they were able to go on and make Abbey Road,” he says. “Just incredible, right?”

A fan is a fan, it seems, even if your name is Elvis Costello.

The Boy Named If is out on January 14.