Father, 41, reveals how he went from ‘dadbod’ to six-pack in just SIX WEEKS while still ‘drinking beer and eating burgers’ – and shares the exact diet and workout routine he followed to make it happen

A father-of-two has revealed how he swapped his ‘dad bod’ for a ripped six pack in just six weeks while still drinking beer and eating burgers.

Like many, Jon Lipsey, 41, felt like he ‘let himself go’ during the pandemic, exercising less and eating ‘too much’.

‘Between March 2020 and September 2021 I added about 7kg of padding – mainly around my belly, love handles and chest,’ he told FEMAIL.

As his waistline expanded, Jon began feeling more ‘stressed, irritable and tired’.  On top of this, he felt like a fraud because, as the founder of health and fitness site New Body Plan, he wanted to practise what he preached.

‘I wanted to get back in shape but, as a 41-year-old father of two, I needed an exercise plan that fitted around a busy life,’ Jon said. ‘I needed training sessions that were fast and fun and I needed a find a way to eat for a healthier body that didn’t feel like a diet.

‘After all, we’d all given up enough over the last couple of years. I wasn’t really up for imposing a set of self-inflicted restrictions. So I came up with a six-week plan of action I called my “Beer and Barbell” plan.’

In just over a month, Jon shed a stone and uncovered a muscular physique previously hidden by lockdown flab.

Here, he tells FEMAIL how he made it happen…

A father-of-two has revealed how he swapped his ‘dad bod’ for a ripped six pack in just six weeks while still drinking beer and eating burgers. Pictured, Jon before (left) and after 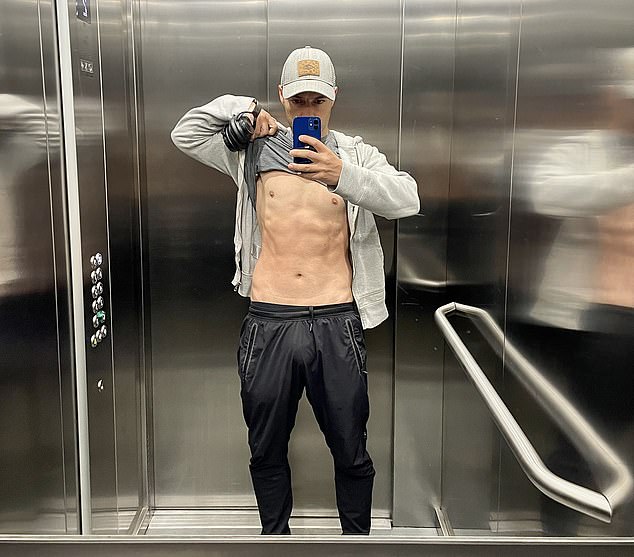 Jon says that his mood was affected by the weight gain, such as becoming more irritable, stressed and tired – besides gaining inches on the waistline. Pictured with his new slim frame

It’s all very well for a 21-year-old Instagram influencer with a cushy job and no kids to have a six pack. They’ve got age, genetics and time on their side.

But what about an overworked middle-aged guy with a hectic family life? My aim was to prove that you can still build a Love Island body, even if you’re old enough for the average contestant to be one of your kids.

According to Public Health England, the average weight gain for people in my age bracket who got heavier during the pandemic was just over 10lb.

How to still enjoy life while losing weight

The other thing I wanted to do was create a way of eating that meant I could lose fat without pressing pause on my social life.

I didn’t want to have to duck out of events because I was on some daft diet. Again, the good news is that you can eat things you might imagine are off the menu if you stick to your calorie ballpark, bias carbs towards a post-workout window and eat plenty of whole foods.

As a result, I was able to eat cupcakes at my son’s third birthday, I tucked in to desert at a restaurant while celebrating my mum’s birthday, and I didn’t have to politely decline a slice of cake when our neighbours invited us over.

As for booze, I could still have a beer with a Friday night curry and I celebrated a friend’s wedding with some wine and fizz.

Now, I didn’t sink six pints of lager and finish off with a kebab and chips on the way home. I haven’t yet found a way to get lean while going on benders.

But the idea that you need to completely ditch the food you love to build the body you want is nonsense.

Once I committed to the idea of getting back in shape, I took a ‘before’ photograph to help me track my progress.

I’ve got to be honest, that wasn’t the most fun part of the process and I wasn’t thrilled with what I saw. But you know what? It gave me the kick up the backside I needed.

Now, you may be of the opinion that I was perfect and beautiful before I started. You might think that wanting to change my physique was an exercise in vanity.

Well, you’re entitled to that view. But my weight gain wasn’t just an aesthetic issue. According to the Harvard School Of Public Health, being obese increases your risk of suffering from a range of diseases and health issues, including type 2 diabetes, cardiovascular disease and cancer.

If, like me, you’re in your 40s or older, the news doesn’t get any better because research presented to the European Congress on Obesity in 2019 showed that people who are severely obese in middle age are 50 per cent more likely to die early than those of a healthy weight.

I knew that if I kept on adding a few kilos of fat every 18 months, it wouldn’t take me long to fall into that bracket.

I set myself the target of getting back in shape in six weeks.

That hit the sweet spot between being short enough to not seem like a huge commitment but long enough to get the result I wanted.

The training system I created combined the best elements of different workout styles to ramp up the effectiveness of each session.

This was all about getting maximum bang for my buck, so three of the 40-minute gym sessions I did each week were a mix of weights and high-intensity training. I also added a quick 20-minute bodyweight home workout – as opposed to another gym session – to make life as easy as possible.

When it came to the nutrition side of things I have some welcome news. I didn’t go hungry and I didn’t cut out any major food groups. I swerved those approaches because extreme diets always end in failure.

Jon said: ‘It’s all very well for a 21-year-old Instagram influencer with a cushy job and no kids to have a six pack. They’ve got age, genetics and time on their side’

The secret to success? Plan far in advance

The main reason I got the outcome I wanted is because I followed a sound plan. That’s the first thing you need to do if you want to make rapid progress. In fact, I’d go so far as to say that if you’re not following a plan, you might as well not bother starting.

Once you have your plan, you need to do a few simple things to stack the odds of success in your favour.

Plan your sessions for the week ahead in advance and treat those sessions as immovable commitments. Get your workout gear ready the night before and leave it by the front door.

And tell yourself that you can make a change because if this 40-something dad can, then you can too.

Sure, you can starve yourself thinner but you’ll trash your metabolism, make yourself miserable and pile the weight back on as soon as you inevitably jack it in.

A smarter approach is to think about your meals this way: make sure you have a good portion of protein with each meal, eat lots of veg and some healthy fats and fill in the rest of your calorie allowance with carbs.

You also don’t have to obsess over calories. They are significant but 100-odd calories either under or over your daily target won’t make a big difference. You’re better off keeping it simple, making sure you’re in the right ballpark and saving your willpower for the moments that matter.

You want to know my training secret? I lifted with perfect form to the best of my ability. It really is that simple.

I created a workout plan with sound theory so all I needed to do was tick off the reps and see each training session as a series of steps towards my goal.

When the six weeks came to an end it was time to take another progress photo. This time I liked what I saw. I was about 1.2st lighter.

I had big arms, boulder shoulders and a set of abs. Not quite Love Island ready, perhaps. But not far off.

Jon says the best approach to food when slimming down is to make sure you have a good portion of protein with each meal, eat lots of veg and some healthy fats and fill in the rest of your calorie allowance with carbs

Ready to get going? Jon’s workout plan – and there’s no gym required! 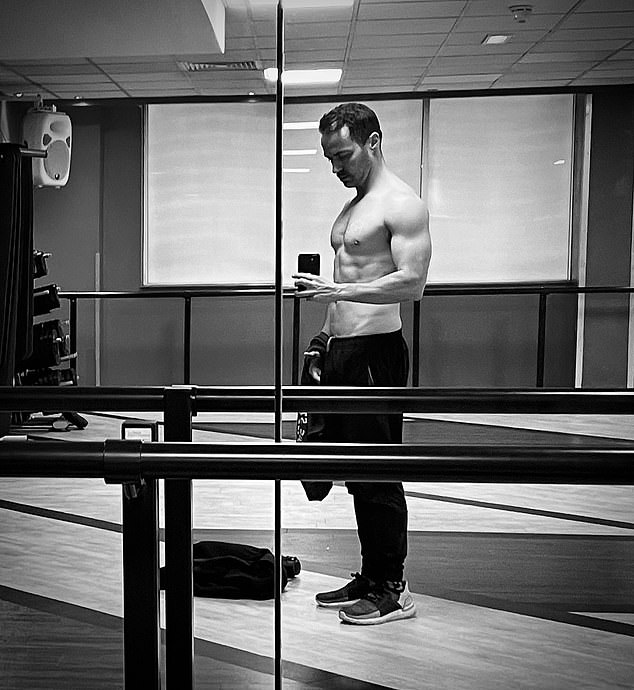 He says that the best thing about not restricting himself on his choice of food, and focusing on portion control and calories, is that he didn’t feel he was on a diet, and it fueled him to hit the exercise sessions, which he did four times a week, with more effort

This workout is a sample workout from the plan that Jon followed. You don’t need any kit – just 20 minutes, four days a week, and a space to exercise.

Do the following exercises in order, following the set, rep and rest instructions. Where you see ‘a’ and ‘b’ after an exercise number, that means the moves are supposed to be done back to back.

So, for example, you do one set of incline press-ups then go straight into a set of alternating bodyweight lunges. You then rest for 40 seconds before gong back to exercise 1a and repeating that pattern until you have done 5 sets of both moves.

Jon’s tip: For the incline press-ups, brace your core throughout the set and keep your elbows close in to your sides and you perform each rep.

For the bodyweight lunges, make sure your front shin is vertical in the lunge position.

If it is angled forwards, that’s a sign you haven’t take a sufficiently long stride.

Jon’s tip: For the bodyweight squats, keep your weight on your heels and mid foot, keep your chest up and avoid rounding your back.

For the squat jumps, land with a flat foot and absorb the impact by starting to bend at the knees and hips as soon as you land.

Expert tip: The key to exercising your abs is concentrating the tension on the target muscles.

So focus more on the quality of abdominal muscle contraction than on the range of motion.

One serving of diet whey protein powder with water

100g chicken breast meat, one rasher of bacon, one boiled egg, sliced, four slices of tomato, half a cup of lettuce, half a tablespoon of light mayo, two slices of toasted whole bread

One small bag of sweet and salty popcorn

Jon Lipsey is the creator of NewBodyPlan.com, a health and fitness website that offers a range of fat-loss exercise and eating plans. His new weight-loss programme, Jon Lipsey’s Fat-Loss Max Plan – AKA ‘The Beer and Barbell Plan’ – is available now at newbodyplan.com.

Kirk Douglas dead: How much was 103-year-old Hollywood star’s net worth before his death?