She wears a necklace of severed heads and holds aloft a bloodied sword. Screams pierce the air around me. Whether the infant emitting them is terrified of the Hindu-deity Kali or merely objecting to being wheeled around London’s British Museum at lunchtime is hard to say.

I am confronted by two divergent images of what it means to be a woman. Before me is Kali, in all her bloody, destructive power; behind me the mundane reality of a woman attempting to pacify a fractious toddler.

Across centuries and cultures, women have been revered as goddesses, put on pedestals and worshipped for their voluptuous beauty, fertility or saintly purity. Or, at the other extreme, feared as terrifying demons, witches and seductresses to be subdued, controlled or destroyed. 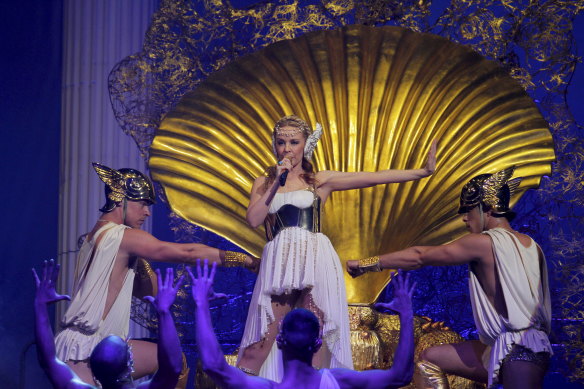 For every gorgeous goddess there is an equal and opposite one. How to account for such diverse and contradictory representations? How has our understanding changed? Why do particular figures continue to grip us?

Such questions are at the heart of the exhibition Feared and Revered: Feminine power through the ages at the National Museum of Australia, which looks at how women have been presented in spiritual traditions and mythology around the world. It’s a timely undertaking when the global #MeToo movement and, in Australia, a change of government prompted in part by female fury at the previous regime, have put women’s authority in the spotlight.

The exhibition includes more than 160 objects from the British Museum, from depictions of a witches’ sabbath and compassionate Buddhist female deities to a half-woman, half-bird-of-prey figure known as the Queen of the Night (pictured below). The show is supplemented by Australian-held items, including Kylie Minogue’s costumes from her Aphrodite: Les Folies tour in 2011. 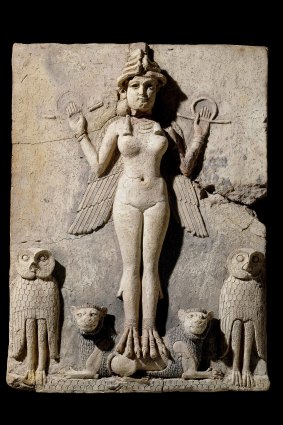 Queen of the Night relief from Iraq.Credit:Trustees of the British Museum

Beyond temples and churches, incarnations of divine female power continue to exert a pull in contemporary society. Popular culture bombards us with images of them, whether it is Kylie Minogue channelling a Greek goddess or Beyonce referencing the Virgin Mary – with a blue veil and a floral halo – to announce the birth of the American singer’s twins on Instagram.

When leading British classicist Mary Beard considers the contemporary political world, the female mythological figure she sees continually evoked is the monstrous, snake-haired Medusa, whose gaze turned observers to stone until she was beheaded by the Greek hero Perseus.

Angela Merkel, Nancy Pelosi and Theresa May have all had the Medusa treatment. Infamously, a grotesque image of Hillary Clinton as Medusa beheaded by Donald Trump appeared on t-shirts, bags and mugs during the 2016 US election campaign.

“That figure has never gone away in attacking powerful women,” says Beard. “If you look at almost any powerful woman in Western politics, you will find that somebody has compared them to Medusa.” 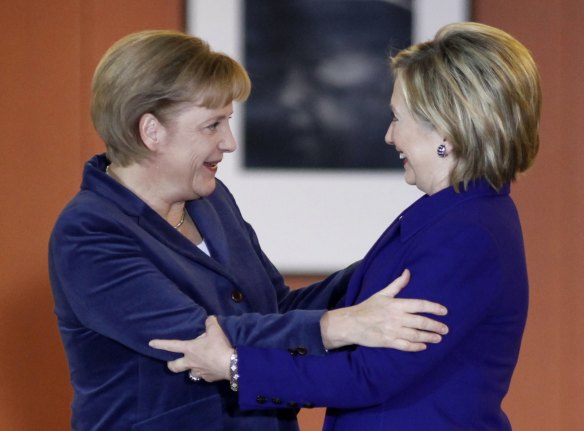 Former German Chancellor Angela Merkel and former US Secretary of State Hillary Clinton have both had the Medusa treatment.Credit:Johannes Eisele

Contemporary debates, including about gender identity, demand we look anew at some ancient figures, Beard says. What do we make of Athena, goddess of wisdom, typically depicted as a sword-wielding fighter wearing armour? She may be more gender-fluid than we have realised. 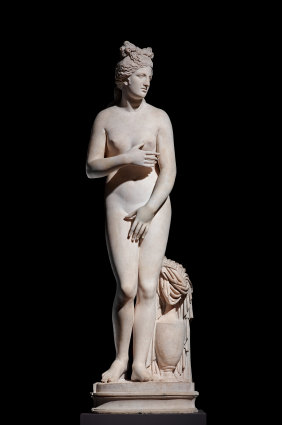 Roman Goddess Venus, associated with love and beauty.Credit:Trustees of the British Museum

“Modern debates help us notice things that we didn’t used to about some of these images. We used to just think about the many Hermaphrodite images – part-men, part-women – that have come down from classical antiquity as slightly odd characters from myth,” says Beard, a British Museum trustee.

“One is a broadly misogynistic strand which says women are dangerously powerful … They will lead you astray, they will get that apple, they will bewitch you,” she says.

That is balanced by the way in which women have re-appropriated some images to assert strength and power.

One long-demonised figure who has been reclaimed is Lilith, believed in some traditions to have been Adam’s first wife (yes, before Eve). But Lilith refused to submit to Adam sexually – to the missionary position – and departed Eden. Feared for centuries, particularly in Jewish folklore, she has been reviled as a child-killer and seductress; the archetypal she-devil.

But in recent decades, Lilith has been celebrated by a range of women artists, writers and feminists as an example of female independence and agency.

From desert sands to fertile plains, ancient figures have emerged for centuries. Who they were or what they were used for remains a mystery in some cases. Nonetheless, many female figures were often simply dubbed “fertility deities”. Such one-size-fits-all labelling has been challenged, not least as women have entered previously male-dominated fields of archaeology and associated disciplines.

Among the most mysterious figures is Sheela-na-gig. With an oversized vulva, her naked image has adorned castles and even churches across Europe, especially Ireland. Was she a warning against lust? A protection against evil? A pre-Christian pagan deity? Nobody knows. 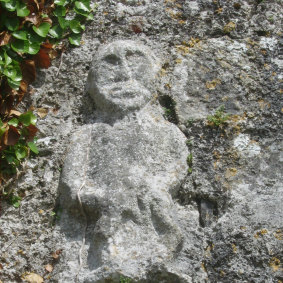 A Sheela-na-gig in Ireland, where she is seen as a powerful female figure.

Whatever she was, Sheela-na-gig has entered popular culture and inspired a young generation of women.

PJ Harvey sings about her and a Dublin street-art group, Project Sheela, now installs her image at sites of female resistance.

Of all female figures, the Virgin Mary remains the single most recognisable and revered worldwide. Yet that figure has changed, says author and historian Marina Warner, who has written extensively on the veneration of Mary.

“She used to be used as a weapon to impose chastity, virginity, submission and obedience on women,” says Warner.

But the Catholic Church’s many sexual scandals and transgressions have meant it no longer has the moral authority to do so, she argues.

“And so, Mary has developed much more closely now to the goddess figures that are in the other religions included in the exhibition, which is more to do with celebration of the body, and ideas of demonic power, even,” she says.

“Because she can crush your enemies … people pray to her against tyranny. Her cult tends to go up in places where there’s tremendous oppression,” says Warner.

Not least in Russia. When feminist band Pussy Riot performed their searing protest against Vladimir Putin and his support by the Orthodox church, they did so in Moscow’s Cathedral of Christ the Saviour. Their song Punk Prayer – which prompted the band’s arrest and jailing – called on Mary to banish Putin.

“Their ferocious, blasphemous protests were actually kind of invocations to Mary,” says Warner.

Beyond Western traditions, it is hard to go past blood-thirsty Hindu-deity Kali. But is this simply a representation of female destructive power, or is there another way to view such a powerful image? 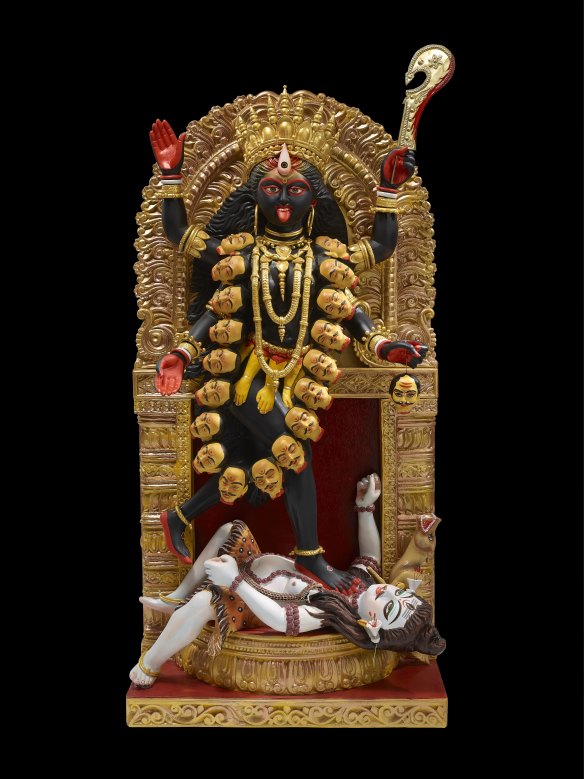 The Kali Icon by Kaushik Ghosh which appears in the National Museum of Australia exhibition.Credit:Trustees of the British Museum

British Museum curator Belinda Crerar says that terrifying as Kali appears – especially to Western eyes – she can be seen as liberating and compassionate.

“The garland of heads that she wears around her neck, the skirt of arms and the sacrificial blood dripping from her sword are symbolic of her destructive powers against negative qualities, like our ego, which is represented through the heads, and attachment to worldly desires, which is represented by the severed arms,” says Crerar.

Similarly with some of the wrathful Tibetan Buddhist female deities represented in the exhibition.

“There’s that sense that these forces of good, of compassion and wisdom need to be more ferocious than the negative qualities that they are battling against,” she says.

Crerar consulted widely – including with contemporary pagans and witches. In Australia, the Canberra museum’s curator Cheryl Crilly was keen to include items from our Indigenous culture.

Among them are mermaid-like fibre sculptures of female water spirits from Arnhem Land. With their fish tails and flowing seaweed hair, the Yawkyawk spirits are said to inhabit rockpools and freshwater streams. 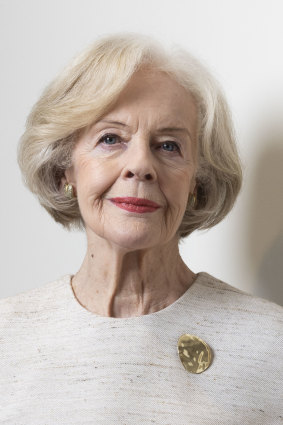 Video screens feature a range of women, including former governor general Quentin Bryce, who consider aspects of the show.

Bryce was drawn to an exuberant image Hindu deity Lakshmi, associated with prosperity, seated on a lotus and showered with water by elephants. The beauty and playfulness appealed to Bryce.

Pinning down women’s divine power may be akin to grasping mercury. But we can see its reflection – from Kali to Kylie.

Feared and Revered: Feminine power through the ages is at the National Museum of Australia until August 27, 2023.