A political storm over religious freedom has set up a test for Prime Minister Scott Morrison over schools that sack gay teachers or expel gay students, with Liberal MPs calling for faster action to fix the problem alongside laws to be put to Parliament today.

Mr Morrison has vowed to prevent schools suspending students on the grounds of their sexuality but has asked for an expert review that will take until early 2023, fuelling frustration about the failure to deliver on a pledge he made in 2018. 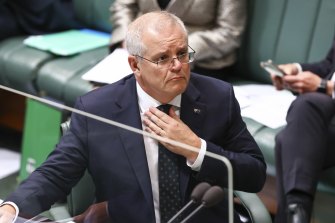 Prime Minister Scott Morrison is facing calls from Liberals to do more to protect gay students and teachers from being kicked out of religious schools.Credit:Dominic Lorrimer

Liberal MPs have gone public with calls to address the treatment of gay students in the debate over religious discrimination, amid warnings from Equality Australia that the draft laws will make it easier for religious schools to dismiss gay teachers.

The debate is dividing opinions in Parliament as conservatives back the Religious Discrimination Bill, church groups welcome the protection for people of faith and Labor expresses support for the principle while raising concerns about the impact in schools.

“I support the need for a Religious Discrimination Act but believe we must also move quickly to address the potential risks faced by gay students and teachers at faith-based institutions,” said Mr Sharma, who represents Wentworth in eastern Sydney.

“No teacher or student should be dismissed or expelled on the basis of their sexual orientation or gender identity and we must make this crystal clear.”

The Religious Discrimination Bill does not change the law in regard to students but confirms the right of church schools to make someone’s personal faith a factor in hiring decisions, as long as the school makes its policy and doctrine clear in a public statement. The existing Sex Discrimination Act allows schools to expel students or sack teachers for being gay.

Mr Sharma told Liberal and Nationals colleagues including Mr Morrison in the Coalition party room on Tuesday that the government had promised to address the issue for gay students in October 2018 when he was fighting the Wentworth by-election.

Liberals believe the political dispute over the treatment of gay teachers and students helped turn voters against the party in that by-election, which Mr Sharma lost. He won the seat at the general election in May 2019.

While the government says students should not be expelled or suspended on the grounds of their sexuality, schools have the power to do this under the Sex Discrimination Act.

Mr Morrison, who plans to introduce the Religious Discrimination Bill into Parliament himself on Thursday, wants the Australian Law Reform Commission to complete its review one year after it passes. The Bill will likely be sent to a Senate inquiry over summer and is not expected to be made law until early next year.

“I can’t even believe we need to discuss it in 2021,” said Ms Archer, who represents Bass in northern Tasmania. “All people should be protected from discrimination, no child should ever face discrimination on the basis of their sexuality.”

Dr Allen, who represents the inner Melbourne seat of Higgins, said the issue should be addressed sooner than the commission review, a view also put by Mr Zimmerman, who represents North Sydney.

“I can’t see any earthly reason why this needs to be delayed any longer. It is simple and easy legislation to fix what has been a problem unresolved for far too long,” Mr Zimmerman said.

“This is about the welfare of children and teenagers.

“I know from my own experience that the teenage years, coming to terms with your sexuality can be an extraordinarily difficult time, and that is just made unbearably harder if you’re at a school where you fear the risk of being expelled because of who you are.”

Mr Zimmerman, who is gay, said he knew of teachers in NSW who had lost their jobs because they were gay.

Senator Bragg spoke in the Senate on Tuesday to declare that Parliament should act more quickly to make sure teachers and students did not suffer discrimination.

“Too many Australian teachers are being sacked for being gay and I do think the existing exemptions in the Sex Discrimination Act are not fit for purpose,” he told the Senate.

“So if we are going to go down this path of looking into providing schools with more authority to act in accordance with their ethos, which is an entirely reasonable proposition, I do think we need to clean up this issue where too many teachers, and indeed students, are being excluded from schools.

“I think that we need to align the processes so this can all be dealt with at the same time.”

Liberal MP Fiona Martin, who represents Reid in Sydney’s inner west, said she wanted the protections for LGBTQI students to be addressed more quickly than the review currently planned.

“I think the 12-month lag is problematic and I think it is very important that we protect students,” said Dr Martin, a psychologist who has worked with children and teenagers.

“We need to amend the Sex Discrimination Act sooner than 2023.”

Warren Entsch, the member for Leichhardt in northern Queensland, said it was possible to look at the treatment of students in the bill before Parliament.

“I’m disappointed that it wasn’t done three years ago and to wait another 12 months, and hope that they take that advice, is a bit of a concern,” he said.

Paige Turley outfits: A look at the Love Island star’s sensational wardrobe and where to shop the looks