Luck is a bright and shiny computer animation for the little ones, as polished as the new penny that forms a central motif in an endlessly complicated plot, in which a young girl befriends a black cat to change her phenomenally bad luck.

The setting looks like New York City. Sam (voiced by Eva Noblezada) has grown up in children’s homes. Her bad luck extends to never having found a foster home. At 18, she must leave the home to work, and live by herself in a lonely bedsit. A stray cat (Simon Pegg) brings her a good luck penny. On first impression, this is an oddly Dickensian start for a kids’ animation that’s supposed to be a comedy. Second, why all the Asian luck symbols in the background? 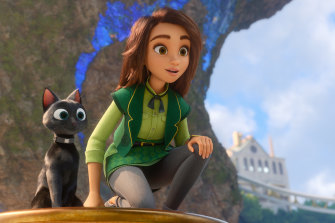 Bob (voiced by Simon Pegg) the cat is a good luck omen to Sam Greenfield (Eva Noblezada) in Luck.Credit:Apple TV+

That question is easy – the film has been carefully fashioned for the Chinese market, the whole idea being calculated to appeal to Chinese superstitions. That could be seen as a tad determinist for western audiences – a bit like saying Sam’s misfortunes are her own destiny: She just has no luck.

The animation is of the high standard we now expect from all feature animations: beautiful colouring, superb resolution, seamless work on the difficult things like hair and movement.

The original idea seems to have come from Madrid’s Ilion Studios. They have a partnership with Skydance Media, whose animation division is the lead producer. In January 2018, the Chinese multinational Tencent bought a large minority stake in Skydance.

Perhaps that’s why we are now seeing Luck on our screens. This is animation with Chinese characteristics, to paraphrase Deng Xiaoping. These subtle changes to western media content have been coming for a while now, and, in many cases, enriching that content. I’m not sure Luck benefits from the creeping superstition, but that’s just me. I’m wary of children’s films that freight hoary old shibboleths.

That aside, Luck is a mixed bag. It has lively physical humour and appealing characters. The Scottish cat is a laugh, and the overall voice cast is distinguished, with Jane Fonda and Whoopi Goldberg in significant roles. It’s also a rare animation helmed by a woman, Peggy Holmes. You can hear a different pro-feminist message in the way she constructs all the female characters.

But at 106 minutes, it’s at least 15 minutes too long, with a complicated story that should have been smoothed out in development. I noticed John Lasseter’s name in the list of executive producers. I’m not sure how much influence he exerted because this is far below the kind of work he turned out at Pixar.

Luck is streaming on Apple TV+ from August 5.