On Tuesday, somewhere between the canapes and cork-popping, a horse race will be run.

Plenty of guests in the Birdcage marquees will go the whole day without seeing any horses in the flesh. But, on paper at least, that’s why they’re there.

What is it about these creatures that excites our imagination? In art, horses have always been deeply symbolic.

“The horse has been a constant source of inspiration to artists throughout the world and across millennia,” says Laurie Benson, curator of international art at the National Gallery of Victoria.

The NGV Collection has over 1000 artworks depicting the horse from ancient time to today.

“The NGV Collection has over 1000 artworks depicting the horse from ancient time to today.”

Since their domestication, horses have been instruments of expansion and conquest – and, to the conquered, subjugation.

In the pre-industrial world, they symbolised wealth and power: there’s a reason the great plazas of Europe are flanked by statues of leaders astride virile and powerful steeds.

"Rulers across all cultures and time periods understood the effectiveness of the horse as a symbol of dominance,” says University of Melbourne associate professor in art history Christopher Marshall.

“Just look at Jacques-Louis David’s Napoleon Crossing the Alps. The horse is rearing backwards, but Napoleon is motivated by destiny – he impels the horse on to victory.” 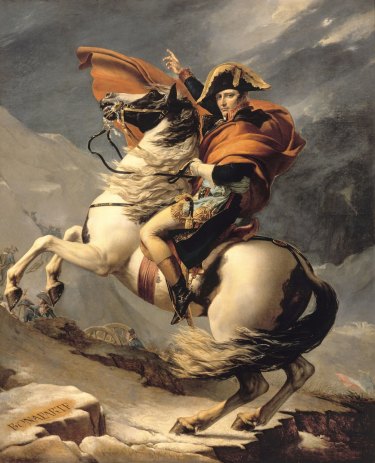 The same heroism appears in post-settlement Australian art, where horses represented progress and European civilisation. They became the defining characteristic of Australian legend: the brumby; the bushranger; the Australian Light Horse Brigade.

In Frederick McCubbin’s The North Wind, human and beast unite to confront Australia’s inhospitable climate. Hans Heysen’s draught horses drag ploughs through the soil, while Tom Roberts’ drover in A Break Away! and Hilda Rix Nicholas’ Fair Musterer bring the continent to heel. 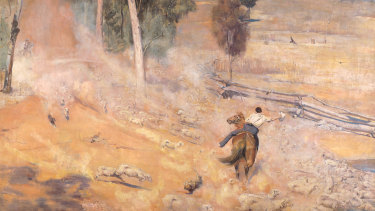 If the horse meant power and potential to conquerors, to cowed populations it represented fear and loss.

"The horse is a symbol of force controlled by the powerful hand of the ruler," Marshall says.

He sees a contemporary parallel with the Roman image on the Arch of Constantine of a mounted Emperor Trajan crushing barbarians underfoot: “There’s not much difference with the footage of the police horses breaking through the lines of the protesters at the International Mining and Resources Conference rallies.” 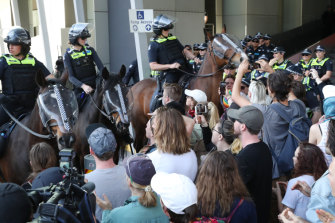 Mounted police face off with protesters at the International Mining and Resources Conference in Melbourne last week. Credit:AAP

The same was true for the first people of Australia. In the mid-19th century, in a cave shelter in Arnhem Land, an artist of the Nawarddeken people portrayed a European man, believed to be explorer Ludwig Leichhardt, astride a horse. We can’t know whether or not the anonymous painter recognised the catastrophic impact the four-legged beast would have as Europeans used them to conquer the continent’s interior. But the arrival of the horse meant life would never be the same for Indigenous Australians.

The arrival of the horse meant life would never be the same for Indigenous Australians.

With the advent of the motorised carriage, the horse became redundant as a mode of transport and cartage. But it retained its allegorical importance to 20th-century Australian artists.

Geoffrey Smith, author of Sidney Nolan: Desert and Drought, says that for Nolan the horse was "integral to the story of Ned Kelly, as well as the ill-fated Burke and Wills expedition and [Nolan's] mythologising of those quintessentially Australian sagas". 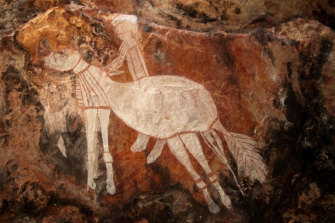 Indigenous rock art along the East Alligator River, thought to be Ludwig Leichhardt in the mid-19th century.Credit:Glenn Campbell

In the remarkable photograph taken during the 1952 drought that crippled the Northern Territory and Queensland, Brian the Stockman at Wave Hill Mounting a Dead Horse, Nolan depicted a stockman swinging a leg over a horse carcass held upright and outfitted with bridle and saddle. It’s an arresting image – a literal manifestation of the saying "flogging a dead horse".

Today, for the most part, horses have become accessories and playthings for the wealthy. And accessories are disposable. Does the empathy that existed between horse and human still exist?

Marshall points out that portraiture can be used to convey such a connection.

"When we look into the eyes of the horse [we] see its ability to feel," he says. "Like the look in the eye of the horse in the NGV’s A Lion Attacking a Horse by George Stubbs – one of my very favourite paintings.” 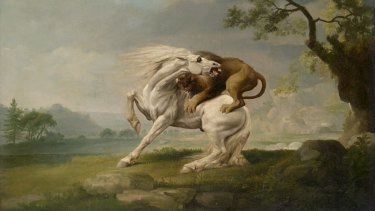 But when these animals are reduced to entertainment, a wounded racehorse is about as useful as a pair of stilettos with a broken heel.

The inhumane treatment of racehorses will cast a shadow over Flemington this year, though the Victoria Racing Club has made moves to address the scandal.

VRC chairperson Amanda Elliott last week announced an equine wellbeing program, saying: “We are absolutely committed to the wellbeing of racehorses both on and off the track.”

Perhaps those standing trackside today will witness a new chapter in the relationship between humans and horses.

Start Reading The ‘One Of Us Is Lying’ Sequel Right Now