A long time ago, back in the early seasons of Game of Thrones, Jon Snow was taken to meet the King Beyond The Wall, who looks him in the eye and declares "I’m going to light the biggest fire the North has ever seen." I suspect if someone went up to the showrunners and asked they would say something similar about this coming season, with a small screen battle that promises to be the biggest battle the show has ever seen. Now word is the sequence will air as part of Game Of Thrones Season 8 episode 3, and probably take up the entire hour.

Considering how tight-lipped most of the cast has been about spoilers for the coming final six episodes, this seems like a surprising bit of information to slide out. But it turns out part of the reason it did is it came from a source who may not be used to keeping details under wraps. The information comes from a translated interview with cast member Vladimir Furdik, who most fans probably don’t even recognize the name of. This is because he’s usually blue, silent, and occasionally slays a dragon when the moment calls for him to upgrade his ride.

That’s right, this information comes from the man behind the Night King’s facade. 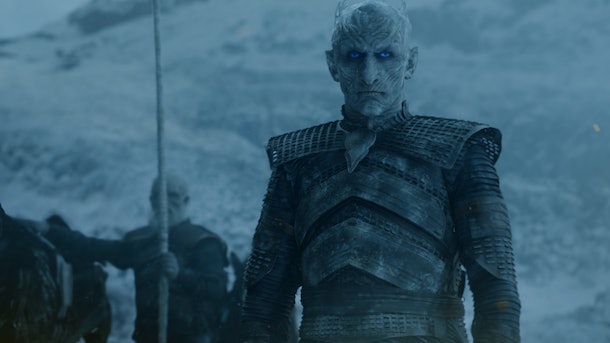 Furdik is actually a professional stuntman who hails from Slovakia. He initially worked as a stunt coordinator for the show, but he took over as the man behind the blue face starting with Season 5 episode 8 when he played the Night King in the massacre at Hardhome.

His recent interview was with the Hungarian outlet Sorozat Wiki, after appearing at the PlayIT Hungexpo. In it, he talks up the massive battle to come, where he leads the Army of the Dead.

With the assistance of Google Translate, here is what he said:

As someone who spent his career doing battle sequences for a living before accidentally winding up as Westerosi History’s Greatest Monster, Furdik points out that "bigger" isn’t necessarily better. What makes the battle to come worth tuning in for is how director Miguel Sapochnik keeps it interesting.

But while Furdik may have accidentally spoiled when the most significant battle in Game of Thrones history comes in the lineup, he knows better than to give away anything, only saying "“I can tell you that there will be no shortage [of surprises] in Season 8."

Game of Thrones Season 8 arrives sometime in April of 2019 on HBO.