Nothing funny about those outfits! Comedians Maya Rudolph and Amy Poehler lead worst-dressed stars at semi-virtual Golden Globes – as A-listers show off fashion fails from home and the red carpet

This year’s Golden Globes looked very different in light of the ongoing pandemic – but one thing remained constant at the awards ceremony: the plethora of fashion fails being flaunted by celebrities, both on the red carpet and at home throughout the semi-virtual event.

Returning hosts Amy Poehler and Tina Fey led the sub-par style at this year’s ceremony, with both women putting on a very dreary show in lackluster black ensembles that did little to flatter their figures, and appeared entirely effortless for all the wrong reasons.

Amy, 49, wore a glittering black turtleneck dress with thick opaque tights that made it look more like she was getting ready for a night out at a trashy club rather than an evening at one of Hollywood’s most prestigious events. Meanwhile her co-host and best friend Tina, 50, seemed to have dressed to match her pal, wearing a tuxedo-style mini dress – which she chose to pair with some rather tacky fishnet-esque tights. 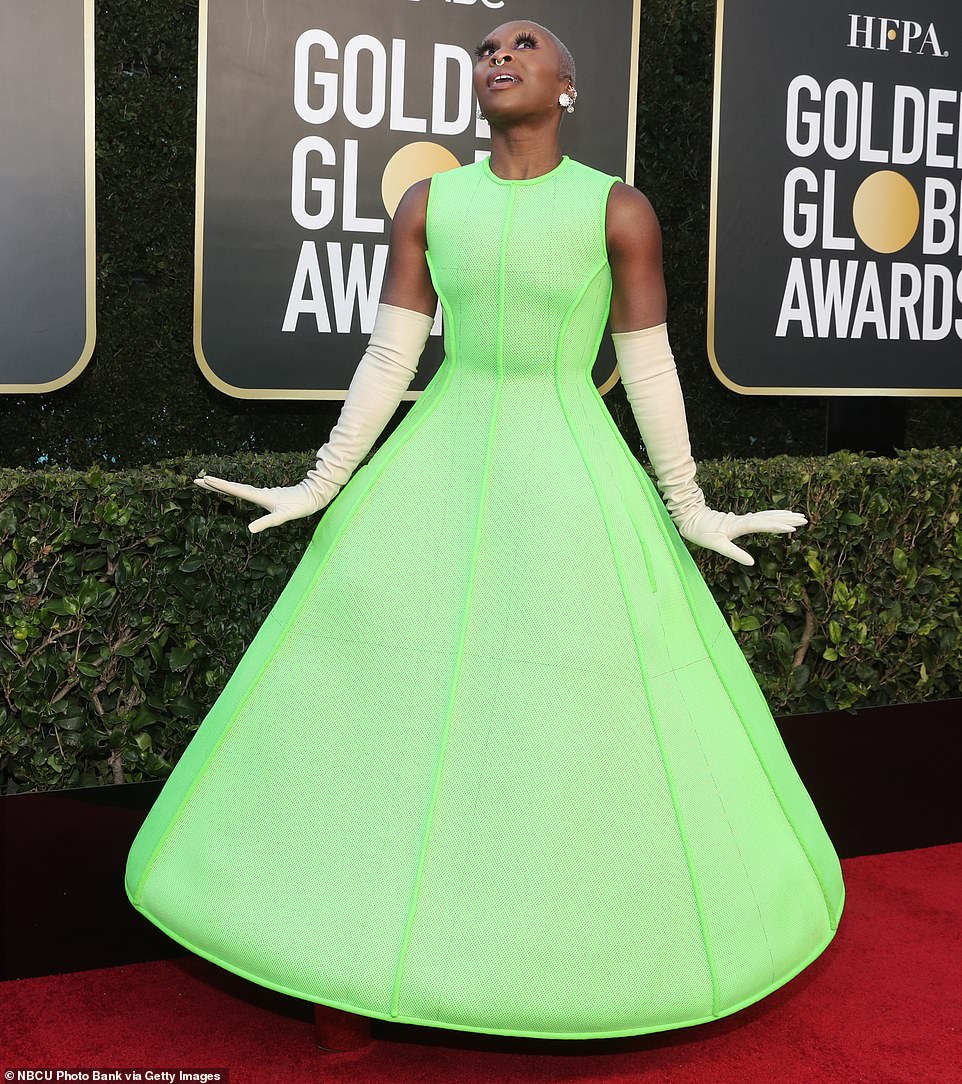 Garish: Cynthia Erivo’s highlighter-green dress was incredibly bright, and the structured shape made it look more like a Halloween costume than a Hollywood gown 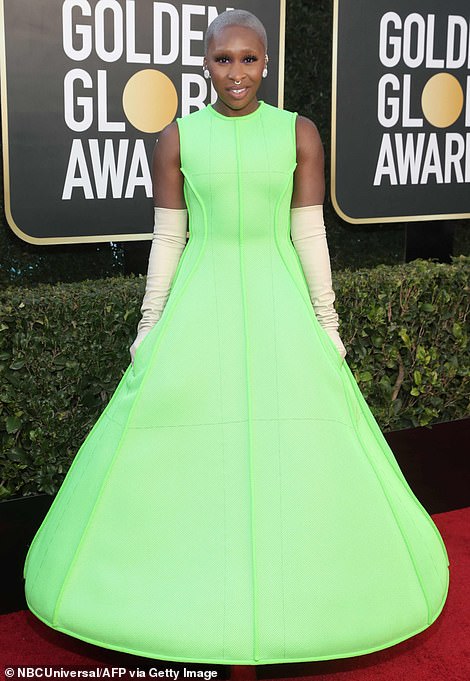 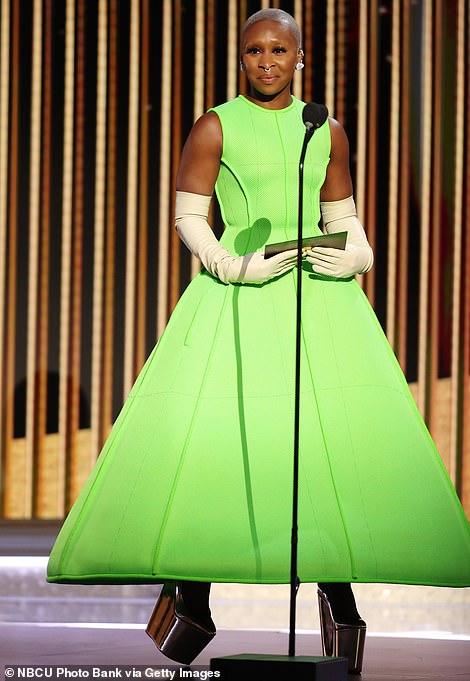 Easy to spot! The 34-year-old actress and singer’s Valentino dress certainly helped her to stand out – although not for the reasons she may have wanted – and her enormous silver platform heels only added to the cartoon quality of the look 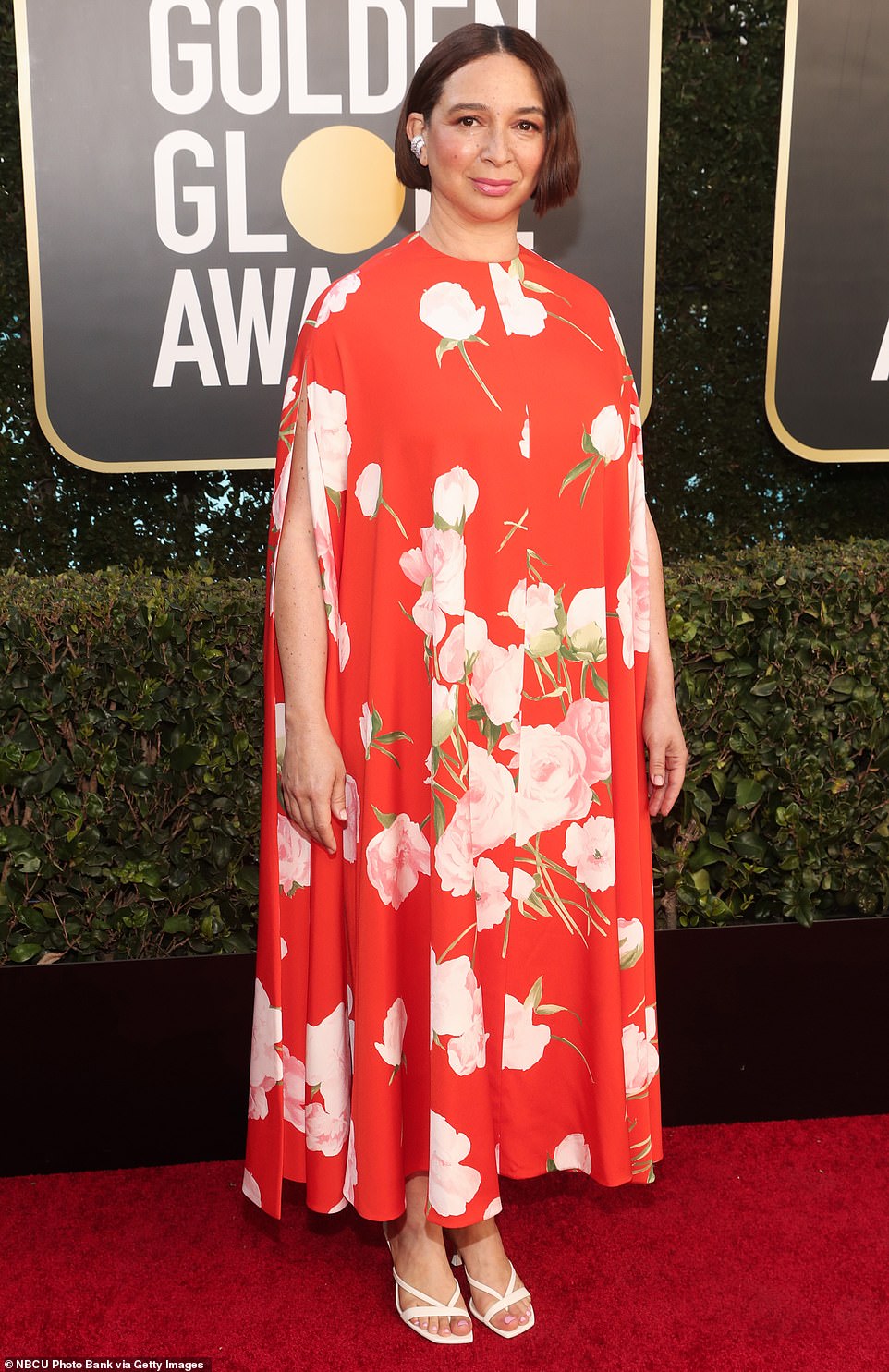 The dress itself was by no means unflattering, however when paired with the tights it took on a rather trashy feel, which was further emphasized by her chunky glittering statement necklace.

Tina and Amy were not the only comedy stars to miss the style mark on Sunday evening; Maya Rudolph also fell short with her fashion choice – a garish floral-print dress that looked a lot like a Hawaiian shirt, rather than a glamorous Hollywood gown.

To add insult to injury, the shape of the dress – which fell to her mid-calf – was incredibly unflattering, and left the stunning 48-year-old appear as though she had simply draped a piece of fabric over herself before heading out the door.

Stealing the sartorial spotlight in all the wrong ways was 34-year-old actress Cynthia Erivo, who was very difficult to miss thanks to her garish neon-green Valentino dress.

The structured gown featured a figure-hugging bodice and an enormous hoop-style skirt, and left the naturally-beautiful star looking as though she had donned a Halloween costume – an image that was further emphasized by the addition of sky-high silver platform shoes, which she showed off on stage while presenting an award.

Also adding to the fashion flops at the in-person event were pre-show host Zuri Hall and Spike Lee’s son Jackson, both of whom turned heads for their rather over-the-top red carpet looks.

Zuri, 32, showed off her enviable figure in a tiny red boob tube, which was somewhat skimpy for such a prestigious event – and could have done with the addition of some extra fabric, which could easily have been found in her enormous matching skirt.

The flowing design swamped her bottom half and only served to further emphasize the tininess of her crop top.

Jackson meanwhile opted to wear a rather dapper suit – but he added a rather ridiculous edge to it by donning a silk kimono over the top, as well as a pair of orange-lensed shades.

And it wasn’t just the stars in attendance at the event who showed off some less-than-impressive ensembles for the evening – the at-home line-up featured just as many sartorial disasters. 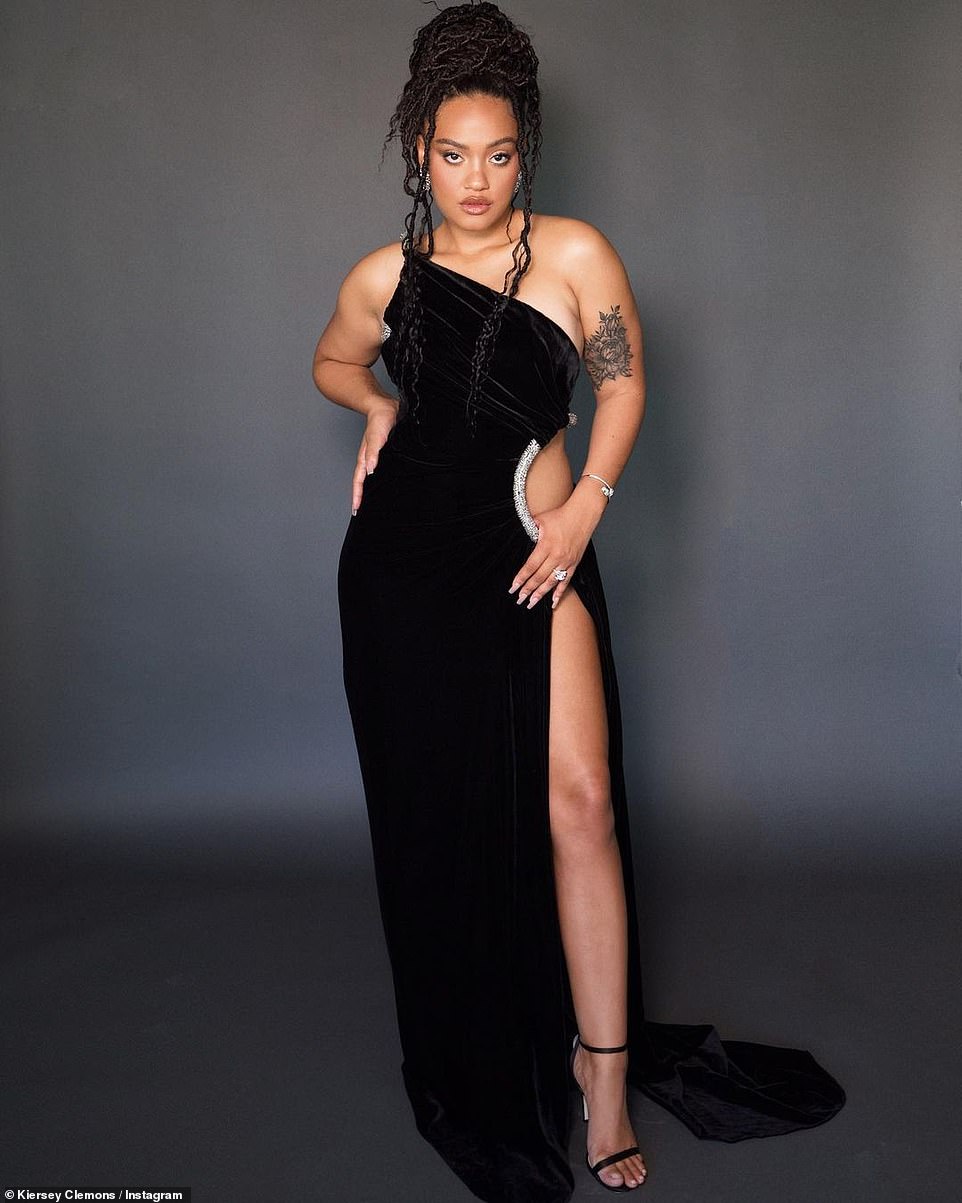 Baring it all: Actress Kiersey Clemons posed in her Golden Globes look at home, rather than on the red carpet, but the professional shoot did little to conceal the very risque slit and cut-out detailing on her dress 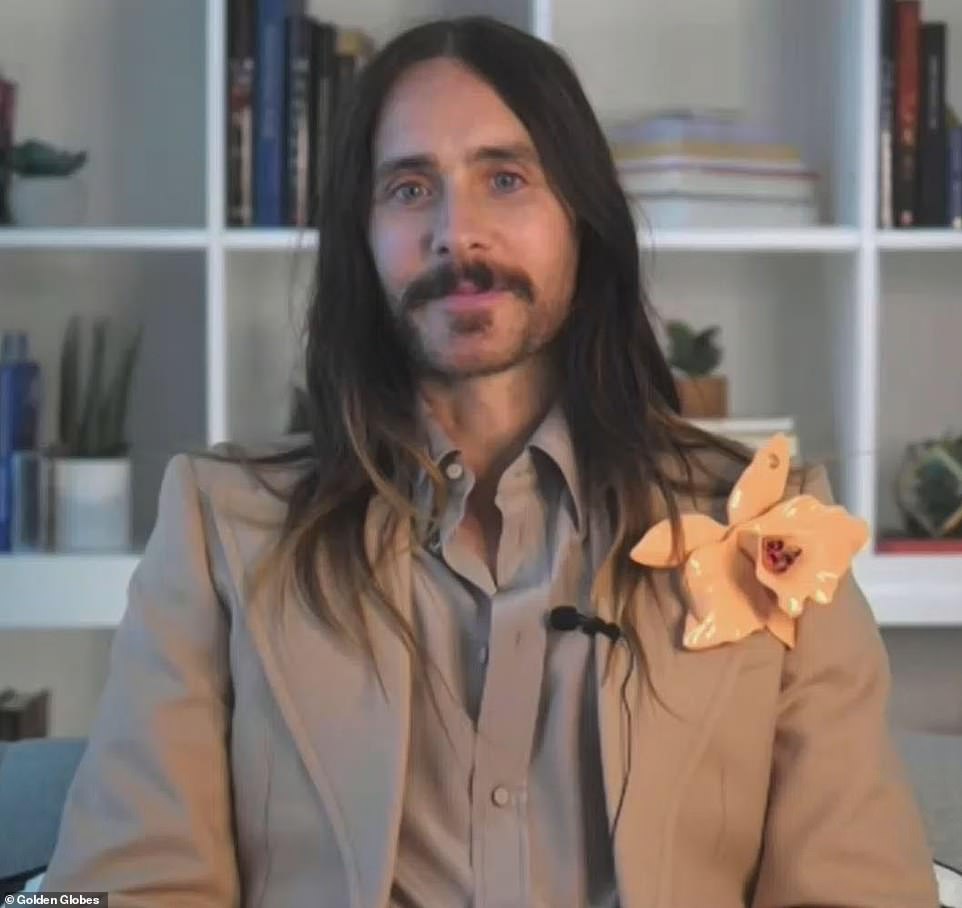 What is that? Jared Leto joined the show from home, where he modeled a beige suit with a very strange looking flower in his lapel, which looked as though it was made from skin 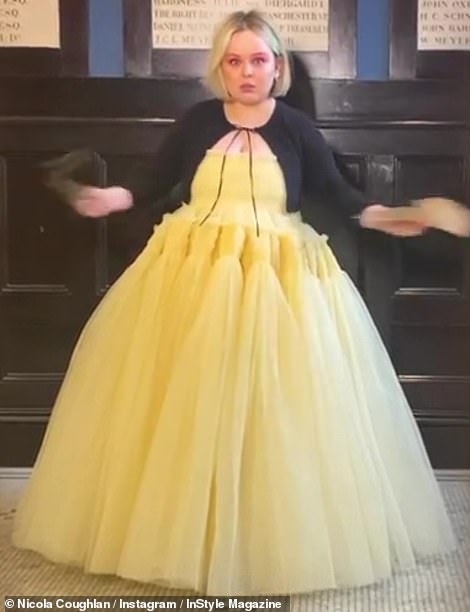 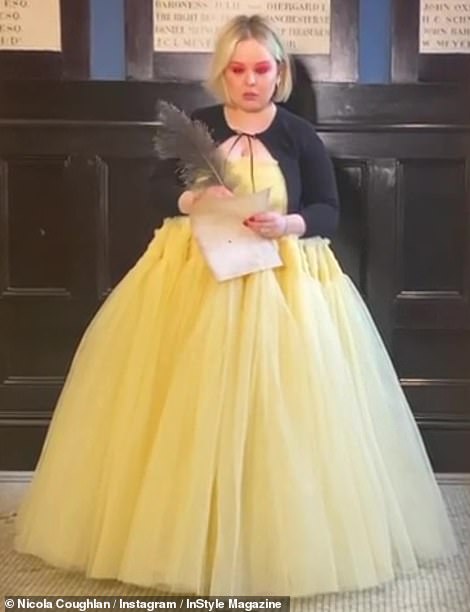 Oh dear: Bridgerton star Nicola Coughlan tried to recreate her character’s style for an at-home video shoot – but the puffed-up yellow gown looked nothing short of comical, particularly when paired with the garish pink eyeshadow 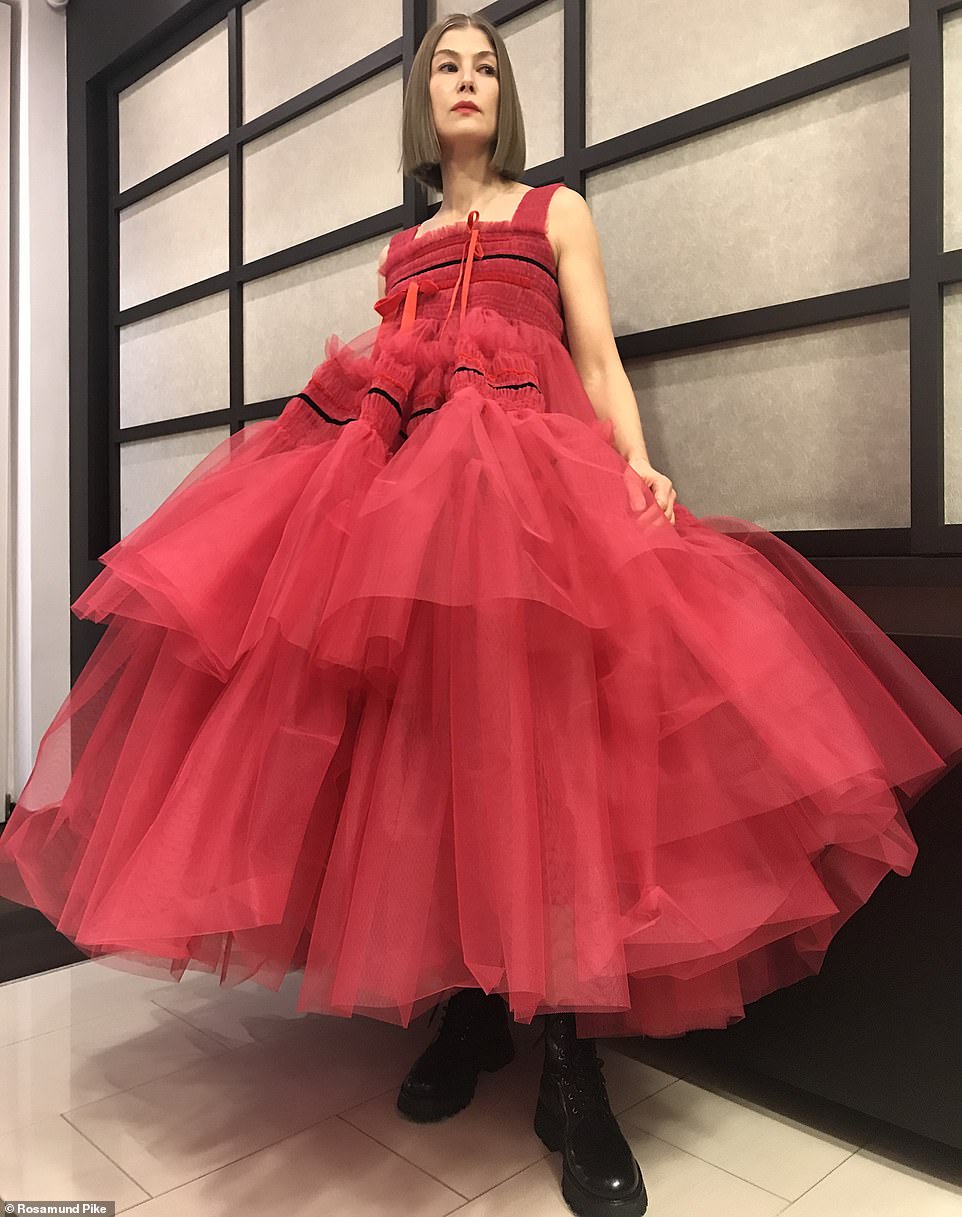 Fluffed up: Rosamund Pike also opted for a poofy gown while celebrating the Globes at home – bizarrely choosing to pair the very feminine style with clunky combat boots, which made for an awkward overall look

Woah: Keke Palmer left absolutely nothing to the imagination in a crop top and tiny hotpants – which may have been fine for dancing around her living room, but were inappropriate for a glittering awards show

How to embrace minimalism and save money in the process