Christmas is a popular time to welcome a new puppy to the family and a year punctuated by lockdowns, with families spending more times at home, has increased demand even further.

But the Department for Environment, Food and Agriculture is warning people against being taken in by puppy farm sellers looking to cash in on demand in the run up to the festive season.

A new video called ’12 Days of Petfish,’ released as part of DEFRA’s Petflish campaign, shines a light on the unfortunate consequences of buying pets from puppy farms passing as legitimate buyers online.

This comes as prices for puppies and kittens have sky-rocketed during lockdown, with popular breeds fetching as much as £11,000.

In the video, a dog named Chester who was sold by a puppy farm, sings about feeling week and wheezin, and has to be taken to the vet, costing £5,000 in treatments and almost dying.

DEFRA hopes the video, which is set to the tune of ’12 Days of Christmas’ will educate people on always checking the sellers they are talking to are legitimate if they buy dogs during the festive season. 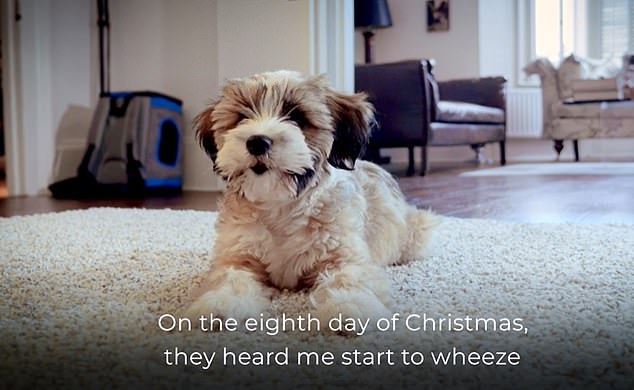 Department for Environment, Food and Agriculture have released a heartbreaking video to warn pet-lovers about buying puppies from deceitful sellers, called ’12 Days of Petfish’ set to the tune of 12 Days of Christmas. It stars animated dog Chester (pictured) 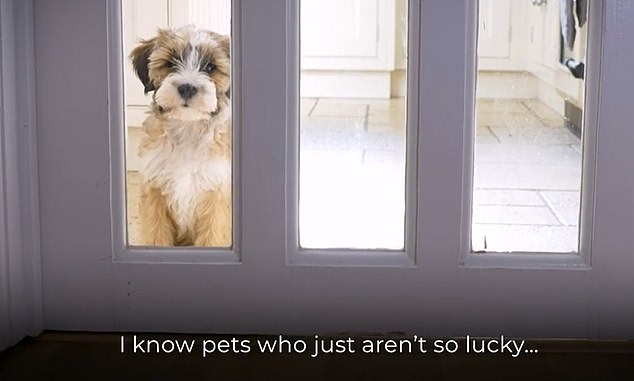 In the video, an animated dog was shown singing, starting with ‘let me tell you a story.

‘On the first day of Christmas, my seller said to me: “You’re going to a new family”,’ the dog started.

‘On the second day of Christmas, the family were told that I was eight-weeks-old, (it was a lie),’ it went on.

The dog made allusions to the fact pet buyers should always ask the sellers to see a puppy or kitten’s mother, to make sure their mother and the puppies themselves are in good health. 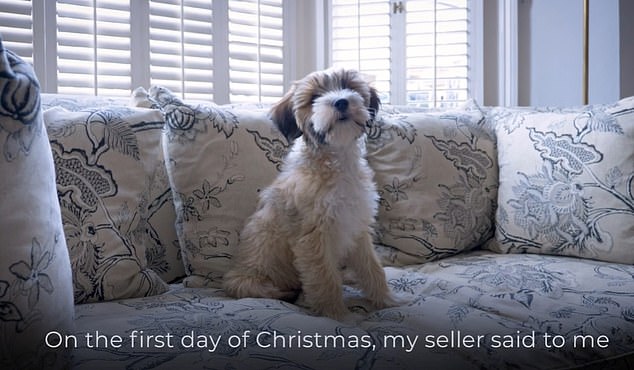 In ’12 Days of Petfish,’ Chester tells how he had to be sent to the vet after he started to feel weak and to wheeze 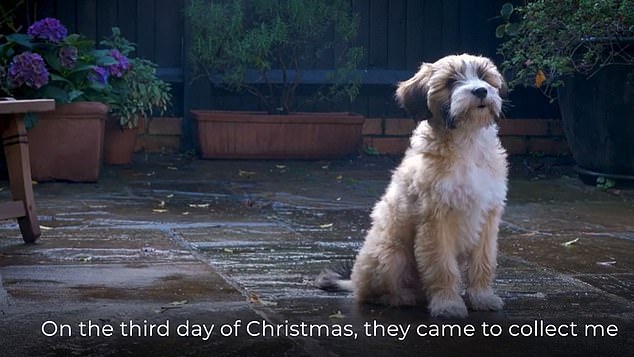 In the video, Chester told how everything seemed normal in the first days following the family picking him up at the seller’s place

‘On the third day of Christmas, they came to collect me, I was so excited but they couldn’t see my mummy,’ the dog in the video sang.

For the next two days, nothing seemed out-of-place for the family who had bought the puppy, with the dog singing:  ‘On the fourth day of Christmas, the children played with me saying: “Aren’t you just so sweet?”

‘On the fifth day of Christmas, I felt so overjoyed. Tail was a-wagging, I was so happy, fitting in with my new family,’ the dog went on.

However, in the middle of the song, the dog started to explain he quickly fell sick, a sign he had not received proper care from his breeder.

‘But on the sixth day of Christmas, things started to turn bleak, I began to feel feel very weak,’ the dog said. 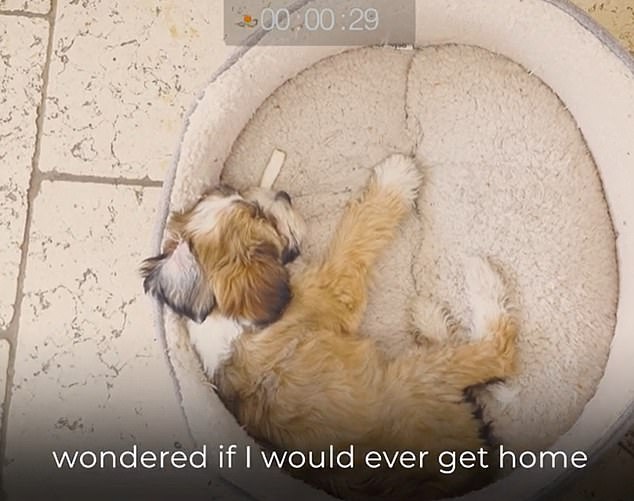 Chester sang about how he had to be operated on by a vet, which cost his new family £5,000 for treatment 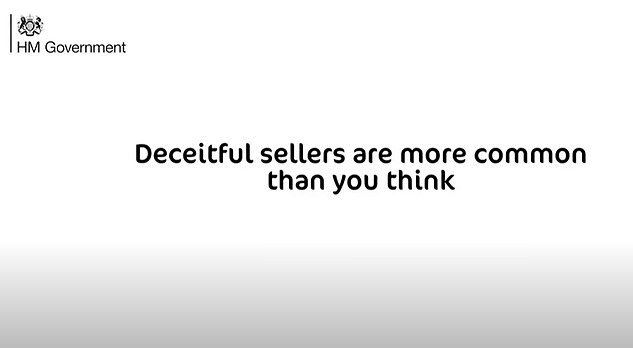 The video ended with a message from DEFRA warning pet buyers to always research their sellers, because ‘deceitful sellers are more common than you think’. The message of the video was enchoes by the RSPCA

‘On the seventh day of Christmas the children were upset asking “what’s wrong with doggy?” I just couldn’t get out of bed,’ the pup went on.

‘On the eighth day of Christmas they heard me start to wheeze, wondering if I have a disease.

The dog went on the explain this resulted in an expensive visit to the vet to be operated on, because pups sold by deceitful sellers often suffer health complications due to being separated from their mothers too early.

Worst than the daunting veterinary costs, the pup’s life hang in the balance.

‘On the eleventh day of Christmas it was quite touch and go wondered if I would ever get home,’ he sang

‘On the twelfth day of Christmas I made it home for tea, I know pet that just aren’t so lucky,’ Chester concluded.

The video ended with a message from DEFRA saying: ‘Deceitful sellers are more common than you think.’

How to check a puppy seller

The government-led Petfished campaign provides advice on how to research a seller and what warning signs to look out for, such as:

· Look at the seller’s profile and search their name online. If they are advertising many litters from different breeds, then this is a red flag.

· Check contact details. Copy and paste the phone number into a search engine. If the number is being used on lots of different adverts, sites and dates then this is likely a deceitful seller.

· Check the animal’s age. Puppies and kittens should never be sold if they are under 8 weeks old.

· Check what medical treatment the animal has had.

This comes as we enter the peak period for puppy sales, where sellers will put out more adverts for puppies than ever during the year.

Research have found last year that  the number of tweets mentioning buying puppies jumped by 435 percent in the lead up to Christmas, DEFRA said.

‘After a difficult year and with many of us spending more time at home, many people may be considering getting a new puppy or kitten,’ he said.

‘However, the lead up to Christmas is a prominent time for unscrupulous sellers to take advantage of those looking to buy a new pet.

‘That is why we are advising people to remain vigilant and to always thoroughly research sellers before getting in touch,’ he added.

On top of her warning regarding disingenuous sellers, Ms Middlemiss warned that it might be hard for puppies to settle during the Christmas period.

‘Potential buyers should also note that Christmas might not be the best time to get a pet as it can be noisy and chaotic, which isn’t the best environment to settle in a new animal,’ she said.

‘While the idea of a new pet joining your family around the tree may be a wonderful festive scene, the truth behind your Christmas puppy could be much darker,’ he said.

‘Dogs used in the underground puppy trade lead miserable lives in horrific conditions and their puppies often have lifelong health and behavioural problems due to their poor start.

‘It is always much better to wait for the right dog than to rush into buying – and unwittingly support cruelty. If concerned, walk away from the seller and contact the RSPCA on 0300 1234 999.’

Kaley Cuoco and Karl Cook's Belated Honeymoon Was Worth the Wait

Why Did Kim Kardashian Think Cyntoia Brown Should Be Released from Prison?