‘You’ve trashed the garden and put a great black lump in it’: Kevin McCloud is NOT impressed by Grand Designs couple building modern timber-clad extension onto 150-year-old shed in the middle of a 19th century estate in Kinross-shire

Grand Designs host Kevin McCloud was left shocked after a couple announced their plans to build a modern timber-clad home in the middle of a 19th century estate in Kinross-shire.

Iain Shillady, 38, and his wife Jenny, 37, appear on the Channel 4 programme tonight having spent for £225,000 buying a 150-year-old bothy and its adjoining walled garden, at Briglands, a former Georgian farmhouse transformed by the architect Sir Robert Lorimer in 1898.

They dreamed of converting the Grade II-listed garden shed into a family home, while also adding on an enormous modern extension into the walled garden, all within 12 months and with a budget of just £350,000.

Kevin was left aghast after first seeing the exterior of the extension in the 19th century walled-garden, and said he had major concerns about how the presence of the huge black block would altar the estate.

But the couple’s build was hampered by difficulties from the outset, including a rotten roof, challenges getting the neighbours on-side and the Covid-19 crisis. 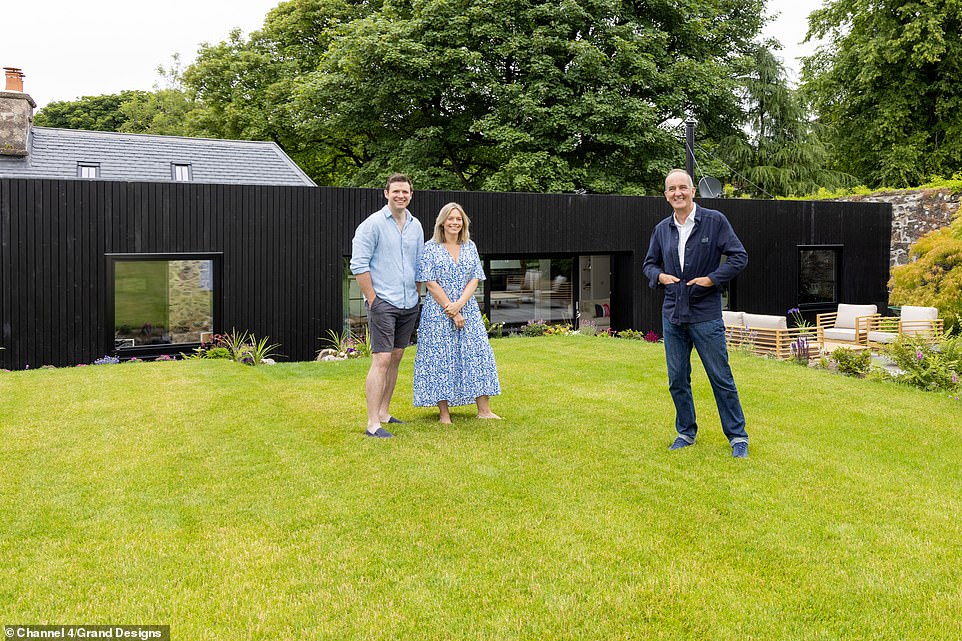 Iain Shillady, 38, of Staran Architects and his wife Jenny, 37, appear on Channel 4’s Grand Designs tonight having bought their 150-year-old bothy, along with its adjoining walled garden, for £225,000 (pictured, on the lawn) 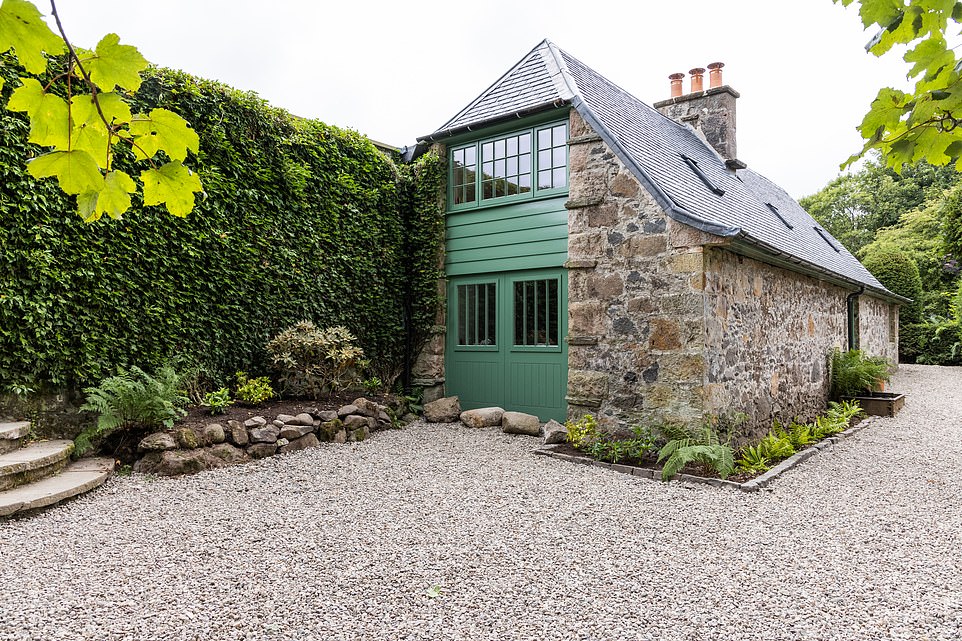 They dreamed of converting the Grade II-listed garden shed into a family home, while also adding on an enormous modern extension into the walled garden, all within 12 months and with a budget of just £350,000 (pictured, the finished bothy)

The Scottish estate was designed by Sir Robert Lorimer, with the 19th century Briglands House as well as other carefully positioned buildings with the same architectural significance.

The Walled Garden is set in beautiful countryside in a secluded position, 6.5 miles east of Dollar and within easy commuting distance of Edinburgh, Glasgow, Stirling and Perth.

Part of the property included the walled garden for growing fruit and vegetables, as well as a bothy.

Iain revealed: ‘We want to make our mark, pushing clients to be a bit bolder. We want to have a legacy of really interesting buildings.’

The architect planned to transform the space into an audacious family home for him, his wife and his two children, Archie and Emily.

Jenny said: ‘Family have come up to see it and they say, “How did you get this”? It feels like something that has been handed down through families for generations.’

Kevin first visited the site in January 2020, telling the couple: ‘It’s not your average bothy is it? It’s got a charm. It’s got beautiful end detailing and all together it is quite posh.’ 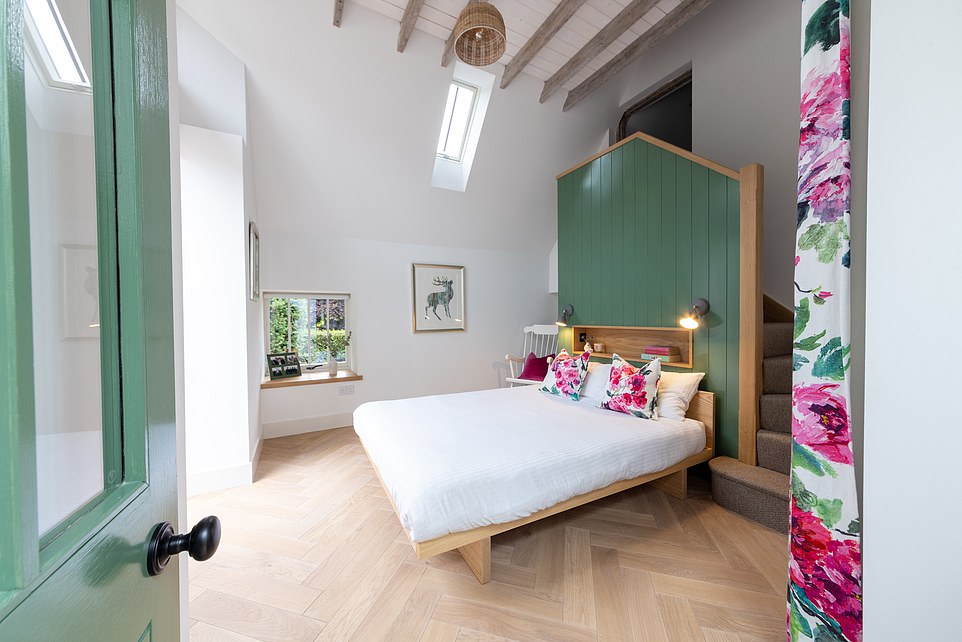 The couple, who had two young children, said they hoped to use the building’s natural character to make a gorgeous forever home (pictured, the guest bedroom) 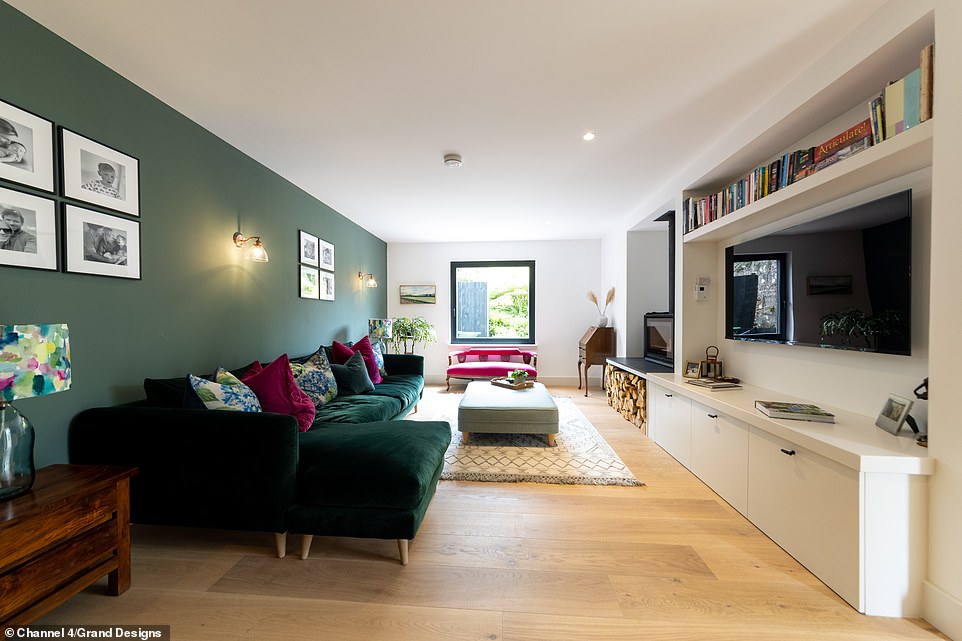 Nobody had ever lived in the property before but Iain came up with an in-your-face strong extension for the rest for the new house (pictured, the snug in the property’s modern extension)

Nobody had ever lived in the property before but Iain had come up with an in-your-face strong extension for the rest for the new house.

He said: ‘On this side of the wall, it’s going to be a new build bit which is a single storey, timber clad box tucked away behind the wall which you won’t see as  you approach the building from the other side.

Planning permission dictated that from the outside, the wall and the bothy would have to stay as they are, although Iain and Jenny were allowed to replace the wrought iron gate with a door.

Behind the wall was another story, where a large swath of the walled garden would be replaced with an insulated timber block.

Iain called the 200 sq metre building a ‘stealth box’, revealing guests would enter into the extended-building through the bothy. 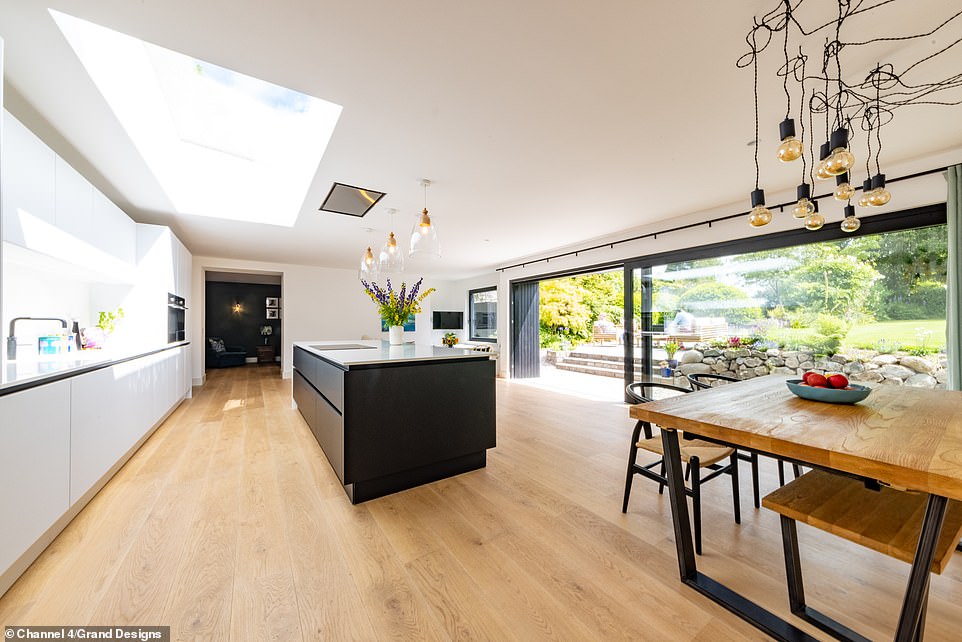 Within the old garden shed would be a playroom, an office for Iain, and the children’s bedrooms, as well as a guest suite at the far end.

Kevin told Iain and Jenny: ‘Living where you are, you have a responsibility with this place. You’re making it bigger, you’re pushing it out into the space and as a family type with these buildings and you’re mucking about with that.’

They said they hoped to finish the project in time for Christmas, with Ian saying: ‘The financial restraints mean we can’t let it rattle on.’

However Kevin was in disbelief over the amount the couple said they wanted to spend, adding: ‘For £350,000 it’s astonishing if you can do it. If you can do it.’

The first challenge was getting machinery onto the listed site, and as history was swept away, so the march of progress was pushed along by the arrival of Ian’s contractor Angus, who installed new foundations for the extension. 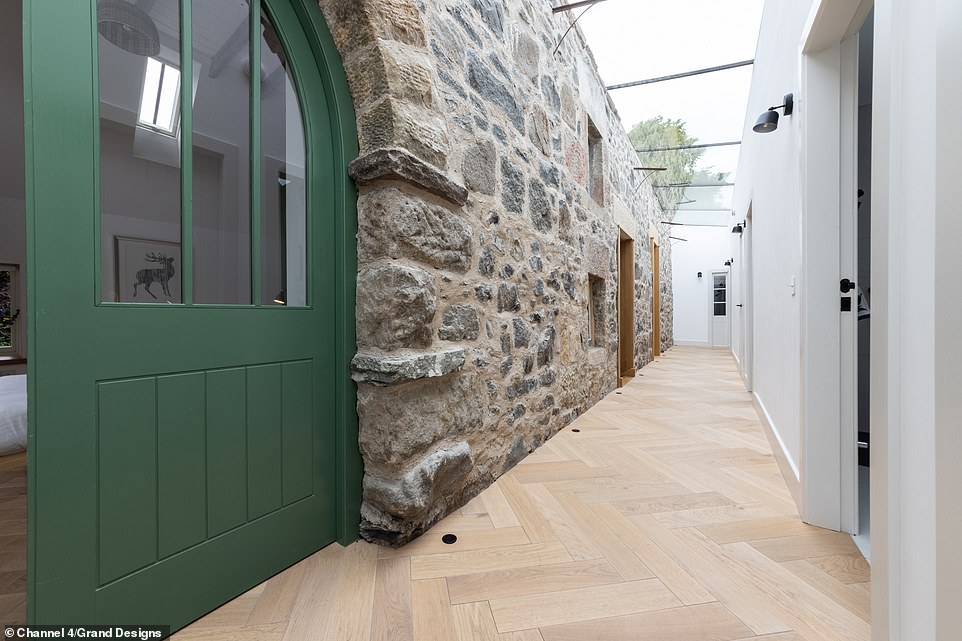 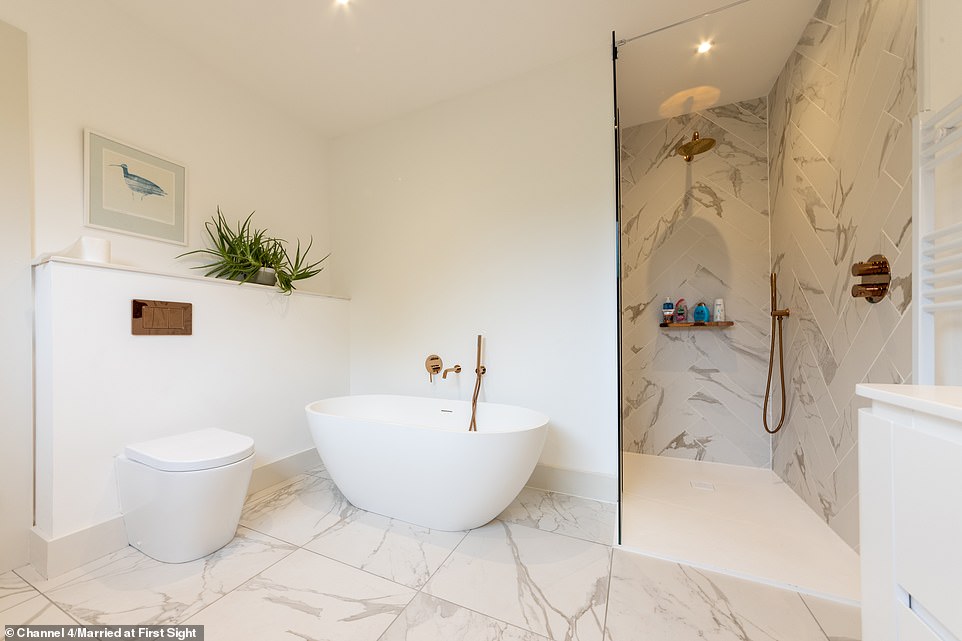 Despite the heritage of the site, the couple revamped the space into a gorgeous modern family home (pictured, one of the four bathrooms)

Angus explained: ‘We have allowed eight weeks to carry out our work, foundations and draining. That’s fingers and toes crossed.’

Iain said: ‘We’re taking a really mature garden and making it a building site. We have to make it a lot worse before we start to put it back together.’

However suddenly the Covid-19 crisis threw their 11 month schedule into disarray and the site was forced to shut down for 10 weeks.

By June 2020, as the world began to open up again, the groundworks got underway. 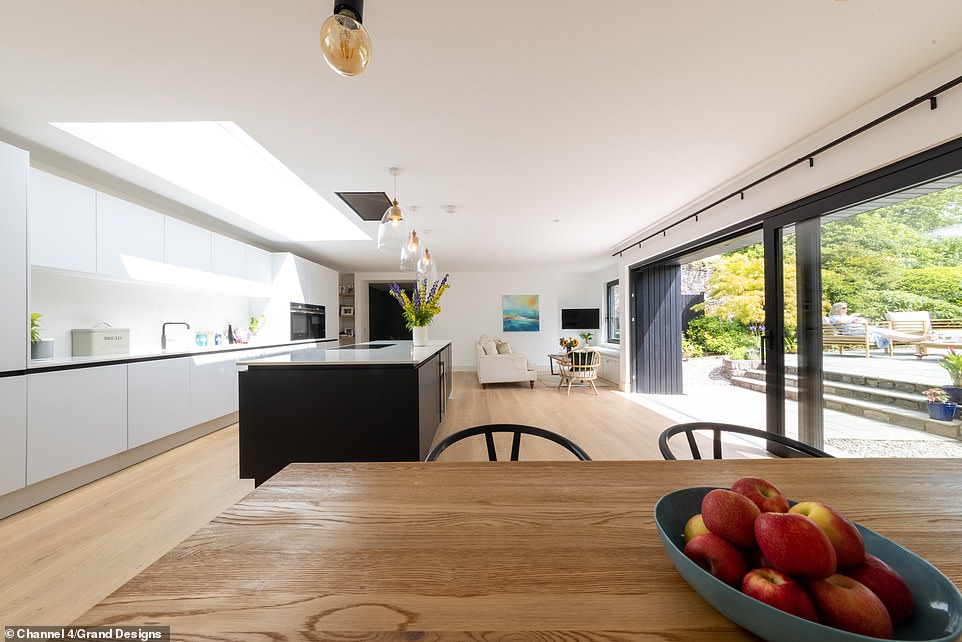 Iain and Jenny said they hoped the property would be their forever home, after spending all of their life savings on the renovation and new build (pictured, the living space)

But Iain said each delay was putting more pressure on his already tight finances, adding: ‘Christmas was the obvious deadline so to then have a quarter of that removred overnight and nothing you can do about it. It’s a bit tough.’

A month later,  the insulated panels and steel which would make up the stealth box arrive on site. These pre-fabricated components for the box cost £62,000.

Planning required the new structure to be no taller than the rickety garden wall, and with the roof set to go on, Ian started to fret.

He said: ‘if the frame does go above, there’s a real chance we could get our knuckles rapped by the planning department. I’d be pretty gutted.’ 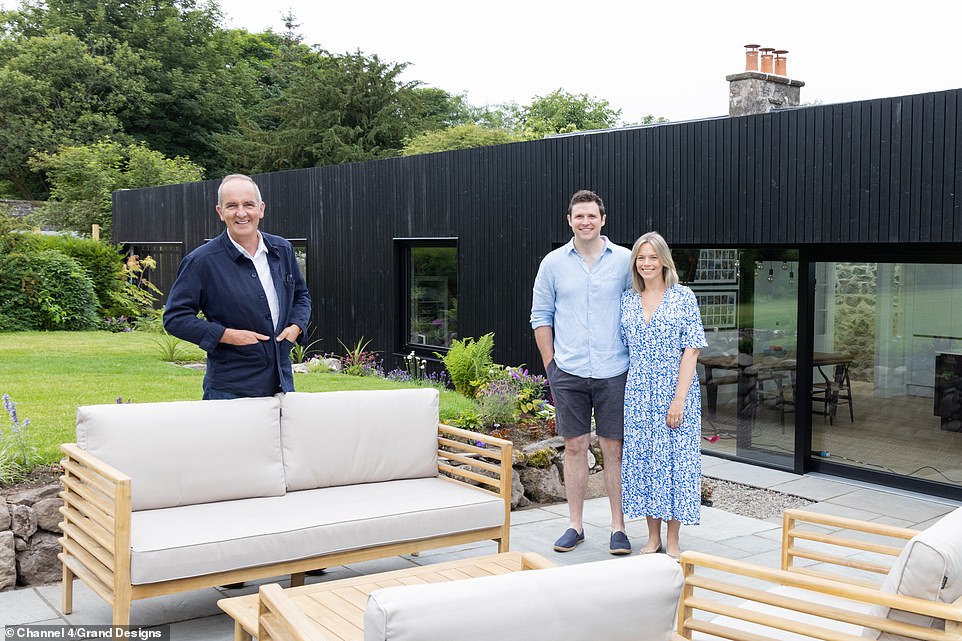 But once the roof was installed, it sat just below the wall.  Six months into the 11 month project and finally Iain and Jenny were on a roll.

Days after the structure was completed, nine pieces of glazing worth £20,000 arrived to be installed. To get the big panes onto site, Ian used for them to use a neighbour’s gate.

Not all the neighbours were so accepting of the works in the walled garden, with local resident Fred telling the cameras: ‘We lived in [the big house] for 40 years. We moved as a group of three families and we were known as the hippy house.

‘It gradually took over our lives for 25 years. I was hoping they would keep most of the planting and shape of the garden. My wife, who is an expert, is a bit disappointed with the state of it at the moment.

‘I hope they will get to grips with it and put it back to somewhat what it was before.’ 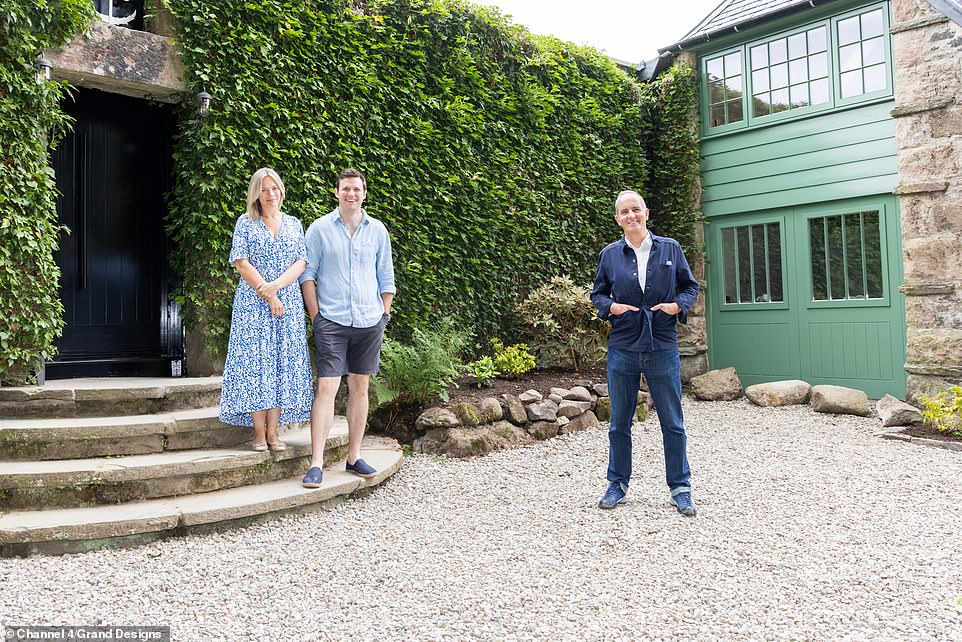 At one stage during the project, Jenny and her architect husband Iain confessed they were feeling pushed to the limit with stress (pictured, with Kevin McCloud)

But there was no turning back at this point in the project, and Kevin arrived on-site to visit the shell of the extension in the walled garden.

Kevin told the couple: ‘Well you’ve trashed the garden and put a great black lump in it.’

Iain told him: ‘We’re still at the breaking egg stage, we haven’t got the omlette as yet.’

Kevin warned he was concerned the presence of it would altar the garden, with Jenny saying: ‘Obviously it’s impacting it. It’s bigger than I thought.’

Meanwhile work had barely started on converting the bothy into a space for the family to inhabit. 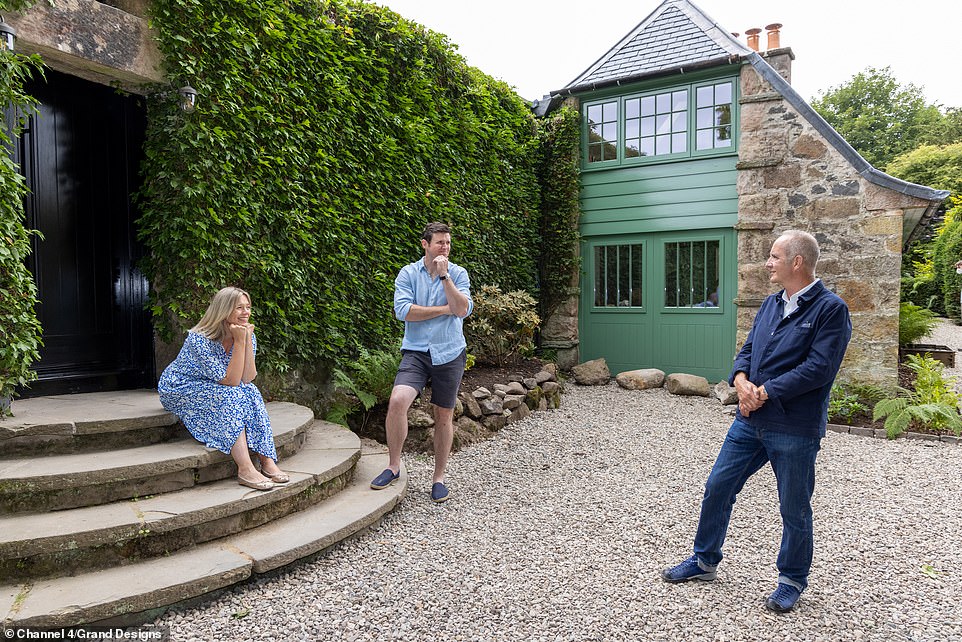 Iain and Jenny described how they were forced to do ‘a lot of plate spinning’ during the pandemic to maintain their jobs, homeschool their children and get the project finished

However as the pandemic rolled on, and with Ian and Jenny doing busy jobs and both homeschooling their children, the family fell to their lowest ebb yet.

Ian said: ‘It’s a lot of plate spinning. We’ve got family who are obviously a priority, our home we’re building, which is a priority. There’s a lot of things…it’s been tough. The tiredness is one thing but I think the stress levels have been a bit tricky thing to deal with.

‘I’ve love to say that I don’t get stressed that easily,  but it’s just the accumulation of things.’

Jenny said: ‘I think he probably doesn’t share some of the more stressful stuff with me. I’m not going to be bale to help.

‘Running a business and having your own business is a big deal and a big stress. having this build on top of this is obviously huge.’

And by September 2020, things were looking worse than ever as the couple discovered the roof of the bothy was rotten to the core – pushing their budget to the absolute limit.

Sun readers share their most cherished holiday memories — plus find out how to book a bargain £9.50 break with The Sun