Saj scoffed as if to say ‘Who is this oily tick?’: HENRY DEEDES watches the Health Secretary spar with his Labour counterpart

Speak to any pimply-faced Parliament swot and they’ll tell you that Wes Streeting is the man to watch.

Received wisdom – not least from young Wesley himself – is that the shadow health secretary is Labour’s leader-in-waiting.

In politics it rarely pays to appear too keen on the top job but one suspects he can’t help it. Ambition courses through those boyish veins.

Yesterday, Streeting came to the Commons to hear his counterpart Sajid Javid deliver his statement on how the Government plans to tackle the staggering NHS backlog.

The slightly proprietorial air which has accompanied him since his promotion to Labour’s front bench was hard to miss.

There was a wink at a colleague, a knowing nod to one of the clerks.

One dreads to think of the toe-curling face-off which might have occurred had the similarly uppity Matt Hancock still been health secretary. It would have been like two rival head boys smarting for a punch-up.

Waiting for the off, Streeting sat cooly twirling one foot in the air and admiring his own prepared text, much as Keir Starmer is prone to do.

Actually, there is rather a lot about Streeting which reminds you of his dear leader: same sharply parted hair, same perturbed expression that worries it might have left the oven on at home.

When he did spring to his feet, Streeting could hardly hold back. 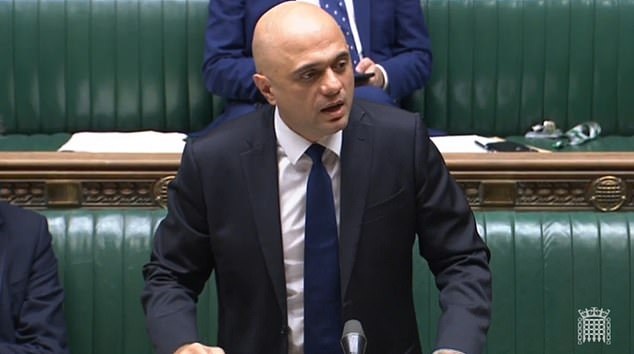 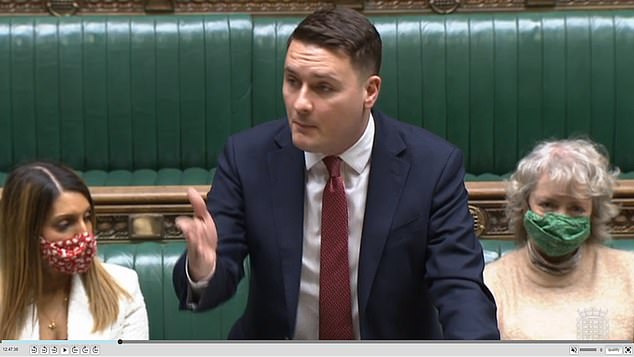 Wes Streeting, Shadow Secretary of State for Health and Social Care said the Government is ‘sending the NHS into battle empty-handed’

There was no ‘Covid backlog’ he said, just a ‘Tory backlog’ from years of underinvestment.

The Government hadn’t ‘fixed the roof while the sun was shining’. Rather it was ‘sending the NHS into battle empty-handed.’

Not a speech fizzing with originality – or subtlety – but hey ho.

The Saj didn’t appreciate his boisterous opponent’s tone. He spluttered and scoffed as if to say ‘Who is this oily tick?’

He accused Streeting of ‘scaremongering’ and ‘playing party politics’ with the NHS.

‘Instead of standing up for the British people he’s just thinking of his own leadership prospects,’ Javid added – but rather clumsily and so failing to provoke the requisite cheer from his own side.

He’s a sweet soul, our Saj. The cut-and-thrust of the House doesn’t come easily to him.

From Labour’s benches came hoots of mocking laughter: ‘That all ya got?’ Like most Labour frontbenchers, Streeting makes a big show of wearing a face mask in the chamber yet takes it off to hurl insults – and doubtless spittle – across the despatch box.

His Labour colleagues, of course, had nothing positive to say. They never do when it comes to the NHS. However many billions are poured down its ever-hungry gullet they will always say it’s not enough.

Mind you, Tory MPs were hardly enthused by the lengthy waits patients must now endure either.

Sprawled in the corner like someone in the Lord’s Pavilion following a two-bottler lunch was Sir Edward Leigh (Con, Gainsborough).

Sir Edward was ‘terrified’ at the prospect of having to wait two years for an operation, and suggested the Government reintroduce tax relief on private medical insurance.

‘And don’t just say ‘‘I’ll speak to the Chancellor’’,’ he implored.

Javid non-committally agreed to meet with Leigh and discuss the idea with him at some point. Translation: ‘I’ll speak to the Chancellor.’

Mark Harper (Con, Forest of Dean) wanted assurances that the £12billion a year raised by April’s National Insurance hike would not be frittered away.

Saj assured Harper it remained his ‘ambition’ the money be ‘spent wisely and in the very best interests of taxpayers’. One for the sizeable Whitehall drawer marked ‘wishful thinking’, I fear.

Earlier, the day’s proceedings began with Sir Lindsay Hoyle rebuking Boris Johnson for his attack on Starmer for failing to prosecute Jimmy Savile.

‘Words have consequences,’ he warned in an apparent reference to the mob that ambushed Starmer outside Parliament on Tuesday which some on the Left have claimed was a direct result of Johnson’s remarks.

Some on the Conservative benches looked notably peeved at the Speaker slapping the PM down in this rather partial manner. I dare say the subject will resurface at PMQs today at some point.

Fraudsters of the world, come to London. And bring your dirty money