Starmer threw himself into the performance with all the enthusiasm of an aspiring but rather nasal ham actor: HENRY DEEDES watches Rishi get the better of Keir at PMQs AGAIN

For a man languishing so far behind in the polls, Rishi Sunak should, by rights, be a political corpse by now – a weeping, bloody wreck held together by masking tape and a few dabs of Pritt Stick.

Instead there is something almost annoyingly chipper about him – a spring-footed, celery juice-fuelled figure of vigour who radiates health spa wellness and Alpine-fresh zing.

Arriving at PMQs today, he waltzed into the chamber bang on midday, one hand casually in his pocket, the other clutching a ring binder, smiling, nodding, winking, all carefree and nonchalant.

He reminded me of one of those preppy-looking jocks you see pictured on the cover of glossy brochures trying to entice students to universities you never knew existed – ‘University of Swindon: Advancing knowledge, transforming minds’ etc. 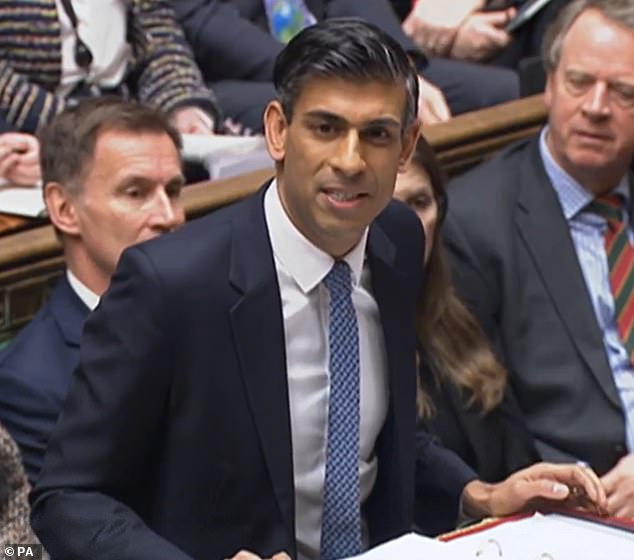 ‘There is something almost annoyingly chipper about Rishi Sunak – a spring-footed, celery juice-fuelled figure of vigour who radiates health spa wellness and Alpine-fresh zing’

Weirdly, the PM actually seems to look forward to these weekly ding-dongs. Most of his predecessors hated them.

Indeed, Tony Blair feared PMQs so much he reduced it from twice-weekly to just one a week. Maybe it’s his public school cockiness, but Mr Sunak clearly feels he’s getting the better of Sir Keir Starmer in their encounters.

Sir Keir focused his attention on today’s nurses’ strike. ‘A badge of shame’ for the Government was how he described it.

Here was Starmer at his most whiningly dramatic. Whenever he gets on to the NHS, he throws himself into his performances with all the enthusiasm of an aspiring but rather nasal ham at a Rada audition, squeezing every fibre of his being to convey deep sincerity.

Mercifully, we were spared another of his lengthy speeches about how the health service is ‘in his DNA’ – his late mother having been a nurse – but it was a close-run thing. 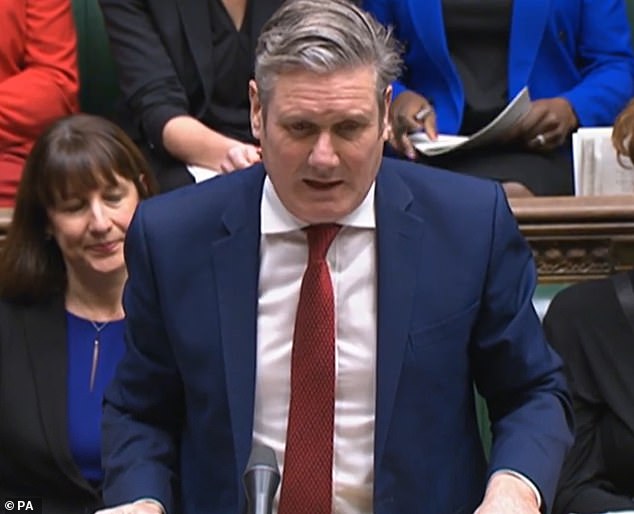 ‘Here was Keir Starmer at his most whiningly dramatic. Whenever he gets on to the NHS, he throws himself into his performances with all the enthusiasm of an aspiring but rather nasal ham at a Rada audition’

Rishi insouciantly informed the House that he was ‘glad’ his opponent had brought up the issue of striking nurses. (Well, he was hardly going to ask him about the weather, was he?)

The PM said Starmer’s refusal to take a position showed him to be a shameless fence-sitter who wasn’t ‘strong enough to stand up to the unions’.

Tory benches cheered. Theresa May even afforded herself a rare smirk. Such a thing is a collector’s item.

Being the final PMQs of the year, there was an air of end-of-term silliness around the chamber. It’s always like this before recess. MPs begin to resemble over-excited children who’ve glugged down too much Sunny Delight.

When Sir Keir claimed the Conservatives had presided over ‘12 years of managed decline’ in the NHS, a Tory heckler let out a yell of ‘Oh no we haven’t!’. Groan.

He accused Sunak of being a Prime Minister who had ‘curled up into a ball and gone into hibernation’ and was ‘always blaming someone else’. He even shoe-horned in a barb about the non-doms issue to remind voters about Mrs Sunak’s complicated tax arrangements.

With his final question, Sir Keir asked Sunak to join him in pledging support for the people of Ukraine, thus preventing the PM from ending with a riposte that generates one of those rip-roaring crescendos that play so well on the lunchtime news clips. A knavish trick, but a tidy one.

Biggest laugh of the afternoon fell to Dame Angela Eagle (Lab, Wallasey), who in crab apple-sour tones asked: ‘This year the Tory party has given us five education secretaries, four chancellors, three prime ministers, two leadership coups… and the partridge has had to sell the pear tree to pay the gas bill. Isn’t the best Christmas present the Prime Minister could give to the British people a general election?’

Labour’s benches erupted into giggles. Dame Angela’s face widened into a vinegary smile. The Tories must thank their lucky stars that Sir Keir prefers not to make more use of her.

Man with extra-large penis claims it's a 'gift from God'