There’s no one right way to date these days — thanks to dating apps, you have more options than ever before, and that’s something to celebrate. Over the past decade, dating apps have soared from a niche aspect of dating culture to a basic cornerstone of dating. And yet, there’s still a lot to love about connecting with someone IRL. That’s why, in honor of National Day of Unplugging, Hinge is offering free drinks at four cocktail bars across the country on Friday, March 1 between 6 – 8 p.m. so you can test your chemistry in person.

After Hinge learned that 77 percent of its users feel they should spend less time on their phones, it chose to celebrate National Day of Unplugging (March 1 – 2) by encouraging its members to temporarily get off the app and meet someone in real life. The dating app — which uses the relationship-friendly slogan "designed to be deleted" — is partnering with the Freehand Hotel Group to offer in-person mingling at bars in New York, Los Angeles, Chicago, and Miami. If you live in one of those four cities, here’s how to score free drinks and entrance to the party:

From midnight on Thursday, Feb. 28 to midnight on Friday, March 1, users will be able to turn off the app’s "Discover" feature (the portion of the app that allows you to "like" potential matches). Users who deactivate the feature by 5:30 p.m. will receive an invitation to the Freehand Hotel’s Broken Shaker bar. During the distraction-free event — phones are discouraged — that night, Hinge members can redeem two drink tickets. Users will be able to meet and mix with other Hinge members face-to-face, rather than via their phones. 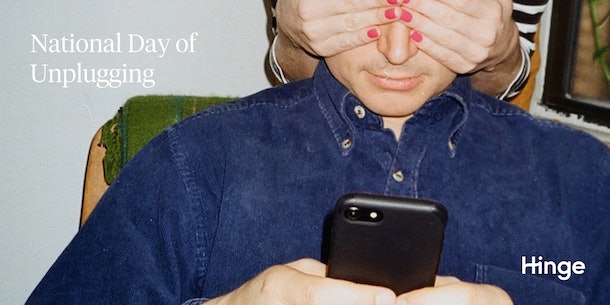 Hinge members who unplug but don’t live in New York, Los Angeles, Chicago, or Miami will be able to enter a sweepstake to win a "dream date" valued up to $1,000 on Hinge’s dime. Pretty sweet.

But after growing up in the age of dating apps, how do 20-somethings feel about putting their phones away for a night? Is the pressure of flirting at a bar too much? Or would an unplugged evening serve as a refreshing change?

"I’ve been on dates where people used their phone as I was speaking, so I’d be into the idea of an incentive of a free drink [and meeting people at Hinge’s event]," Javi, 23, tells Elite Daily.

Shelby, 23, agrees. "[What] I hate about online dating is that the attention span is so short," she tells Elite Daily. "This event makes me want to get out there and meet someone." At a bar, unlike on a dating app, a conversation can’t fizzle out quite so easily due to lack of attention.

If you live in one of these four cities and are bored with your typical dating routine, or simply need a break from staring at your phone, Hinge’s National Day of Unplugging event might be exactly what the dating doctor ordered.

We Just Got a Rare Glimpse of Kate Middleton's Home Office

Did Princess Diana Ever Forgive Prince Charles and Camilla For the Affair?