Home » Lifestyle » Hitler, terrorism, Port Arthur: Should some subjects be off limits?

When news broke this week that a film about the perpetrator of the Port Arthur massacre is in production in Geelong, the condemnation was swift. The comments on articles, on social media, in Tasmanian parliament and in Canberra mostly amounted to the same thing: we don't need this, we don't want this, we won't watch this.

That's bad news for Stan (the principal financier of the film), for the Melbourne International Film Festival (which will premiere it next year) and for the cast and crew. But it also raises an interesting question: should some real-life historical events just be left alone? And if so, where do you draw the line?

While a film about a man who killed 35 people and injured 23 others is seemingly beyond the pale, no one would blink at the idea of a film about Adolf Hitler, arguably the greatest perpetrator of atrocities the planet has ever known. Just this year, in fact, a film in which he was depicted as a slightly needy imaginary friend (JoJo Rabbit) won the Oscar for best adapted screenplay. He's been treated seriously (Downfall), comically (The Great Dictator), even musically (The Producers). If Hitler is fair game, surely everything is? 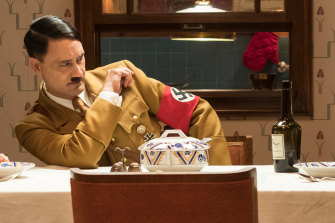 "I'm not sure we need to write about Hitler as a man," says Jackie French, the author of a trilogy of novels about the Fuhrer for younger readers. "It's Hitler as a phenomenon. How could this quite silly man convince people – including the King of England – it was the moral thing to do, the right thing to do, to exterminate people?"

French says that at the last talk she gave on the subject, a 10-year-old asked her "who is Hitler?". It was a salutary moment. "We think the world will not forget, but we do."

So perhaps some temporal distance is a significant factor; the closer we are in time to an event, the more raw it is; the further away we are, the more licence – and perhaps need – there is to breathe new life into it.

"Something that happened late last year is off limits," says Peter FitzSimons, who has written about a range of historical atrocities, including the war crimes of Breaker Morant and the murders and cannibalism perpetrated by the survivors of the Batavia shipwreck. "It does need time to have passed."

But how much time exactly? It has been 24 years since the Port Arthur massacre, but as Prime Minister Scott Morrison said on Thursday, "it seems like a few days ago … such was the horror of that day. It has scarred us as a nation deeply." That's a view echoed by Tasmanian Premier Peter Gutwein, who said earlier in the week that "even after such a long period of time this is … still a raw nerve for many Tasmanians".

Significantly, though, there was no suggestion the film should not be made, only a desire for it to be made respectfully, in a way that did not add unduly to the stress and trauma of survivors, first responders, and relatives and friends of the victims.

But is that even possible when any attempt to revisit such an incident cannot help but be triggering to some degree?

The Port Arthur film – which will not depict the shootings, and is tentatively titled Nitram – will arrive 25 years after the massacre. For Paul Valent, traumatologist and author of the book Heart of Violence: Why People Harm Each Other, anniversaries are always likely to reignite memories of and responses to that initial trauma. But, he says, "the time has come for us to understand this and make something of it. I think the anniversary could be significant, in a positive way."

That would necessitate a clear-eyed willingness to understand the forces that shaped the killer, he says, rather than a focus on the event itself (and such is the stated intent of screenwriter Shaun Grant and director Justin Kurzel).

"If you don't explore you're left in ignorance," says Valent. "There were things not explored in the past, like sexual abuse or clerical abuse or domestic violence, and not exploring them didn't make them stop."

With respect to the Port Arthur killer, he notes "there's a view that you shouldn't give air to this monster – but if you don't give it air you only see a monster, whereas if you do give air you see a pathetic, intellectually deficient, infantilised person whose psychiatric treatment was inadequate".

"People are not born violent," he adds. "It is an option that is way down the line for them, and it is a desperate option. It is always best to examine the reasons for the violence and hopefully, in doing so, to learn from it and prevent it from happening again."

But Chris Cantor, a retired psychiatrist who wrote a couple of academic papers about the psychology of mass shooters just prior to Port Arthur, isn't so sure. No matter how negative the portrait of a perpetrator, the mere fact they are being mentioned is fuel to the fire and likely to inspire copycats.

"It's fairly clearly demonstrated that these guys are predominantly losers and that by going out in a blaze of glory they are empowered, because everybody knows them," he says. "Anything that contributes to the empowerment of the perpetrator is going to be more risky. Describing him in extremely negative terms doesn't offset that."

Cantor advocates the approach of the Don't Name Them movement, which focuses attention on the victims and the incident rather than the shooter.

"The press appear to have traditionally run a story that goes Day 1: 'this dreadful event has happened'; Day 2: 'what sort of person would do it?', and the notoriety arises from that. I would hate a movie to do that."

But is it really the case that any portrayal is inherently an incitement to imitators? Is it not possible that by honestly wrestling with the multitude of factors that create a mass murderer we make ourselves more able to spot them before they enact their dreadful fantasies, to intervene with support and diversionary services where possible, or containment where that is the only option? 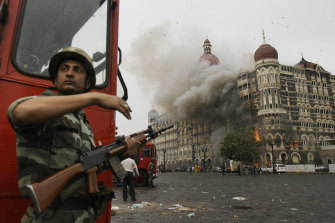 The terrorist attack on Mumbai’s Taj Mahal Palace in November 2008 was the subject of the 2018 film Hotel Mumbai.Credit:AP

John Collee, the screenwriter of Hotel Mumbai, about the 2008 terrorist attack on the Taj Mahal Palace Hotel, believes so. He and director Anthony Maras copped considerable flak over their "fairly gruelling" 2018 film. "But we both feel the movie was justified as it doesn't merely exploit the tragedy as an adrenaline rush, it tends to focus on positive emotions – specifically the courage of the hotel staff and, in some cases, the noble but utterly misguided thinking of the terrorists, whom we came to see as victims of the tragedy as well as aggressors."

However, Collee believes the filmmakers have an obligation to engage the families of victims in developing such a story: "They're not easy conversations to have but if you're writing about people who've been through that kind of trauma then the very least you owe them is to talk with them about it."

Valent agrees and goes further, suggesting duty of care extends into the release phase too. "I think they should be consulted before and given support, but I think ultimately it can be a positive for them," he says. "If it can help prevent such events happening again, the deaths of the victims can be seen to have some meaning and purpose. But if a survivor were to take their own life as a result it would be a terrible thing, so they need to be consulted and supported for as long as it takes. It can be a very big trigger."

In the end, so much depends on how the subject is handled. A film that exploits a dreadful situation for mere titillation or thrills "not only need not be told, it should not be told", says French. But a film that attempts to understand "the tragedy" of the Port Arthur killer "has the potential to be magnificent".

"There can be no excuse to justify Port Arthur, but if it offers an understanding of how this most traumatic of all events occurred, that has to be for the good of all," adds FitzSimons.

"If it's an honest account, it's not inherently disrespectful of the dead. But if it's making a case for [his] innocence I'll be at the front of the boycott queue."