In the studio with the artist whose sculptural pieces are as mesmerizing as they are unsettling. 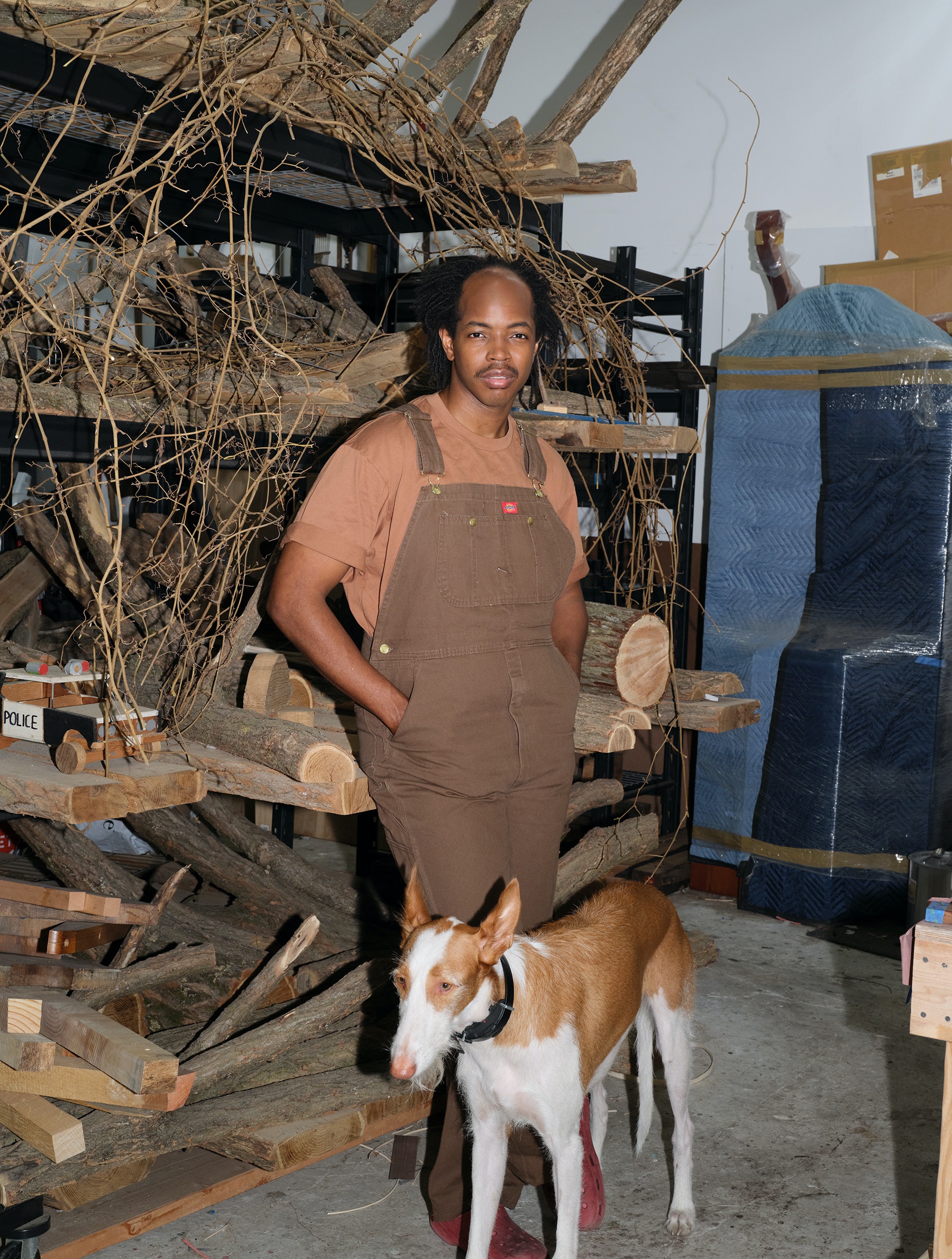 At the eccentrically daft dinner parties that Hugh Hayden stages regularly, guests are showered with hospitality and hobbled by irksome constraints. Much thought and care goes into these culinary installations, which he has been presenting in different forms since high school. Using his training as an architect, Hayden, now 37, once designed a set of interlocking tables with semicircular cutouts that enclosed diners, who were seated on spinning stools. In an earlier year, he bound and blindfolded his guests, and spoon-fed them. He usually dictates a dress code—most recently, white shirts and black pants. “They’re a lot of fun, but it requires you to submit to the experience,” said Kayode Ojo, a sculptor and a friend, of the soirées. “He’s a very generous host. It’s almost a lot of pressure as a guest, as well. You’re a bit trapped.”

The uncomfortable reality of interacting with a space that’s not quite what you had envisioned is a theme that runs through much of Hayden’s art. His sculptures include church pews upholstered with bristles, a carved wooden football helmet with internal spikes, and an Adirondack chair with protruding limbs. “All of my work is about the American dream, whether it’s a table that’s hard to sit at or a thorny school desk,” Hayden said. “It’s a dream that is seductive, but difficult to inhabit.”

He was speaking at the end of August in his studio in the South Bronx, a space he was ready to relinquish for an East Williamsburg studio almost three times as large. He was living the American dream, subcategory Successful Young Artist. On his agenda was finishing the pieces that would be displayed in “Boogey Men,” his solo show at the Institute of Contemporary Art, Miami, opening November 30. In Madison Square Park, which has staged outdoor exhibitions of such established artists as Martin Puryear, Teresita Fernández, and Maya Lin, he will install 100 grade-school desk chairs that sprout intertwining branches, in a piece he calls Brier Patch, opening in January 2022. Commissioned by the Public Art Fund, he is co-curating another New York show, “Black Atlantic,” featuring five artists, himself included, that will be installed at Brooklyn Bridge Park in May.

“When I was younger, I would say, ‘I’d love to have an exhibition,’ and never say no to anyone,” he observed. “Now I have to choose between projects. I’m trying to sustain it. Being an emerging artist, no one can tell you what to expect or how to be successful.” Earnest and affable, Hayden speaks with an uncommon candor. “Hugh wants to become a real art superstar,” said his friend Hannah Levy, a sculptor whose studio is in the same building as his in the Bronx. “When you talk to most people about their career, they won’t admit that, because it’s a little embarrassing. He doesn’t have embarrassment about that. And I think he’s achieving it.”

Hayden, with works in progress.

When I visited his studio, it was replete with wood blocks and tree branches, along with pieces from past shows hanging on the walls, and works in progress. Two assistants were seated at a large table, in confines that were made more claustrophobic by the friendly, bounding presence of Hayden’s large Ibizan hound, Mars. A shipment of hammered copper pots and pans that he’d bought at a flea market on a recent trip to Brussels had just arrived. He was melding brass instruments to 12 of them; they would join 12 cast-iron skillets that he was backing with African-style masks, each different, but all of them simulating his ears and mouth. The two dozen customized pots and skillets would hang from a three-tier rack. He had called the piece Soul Food, and planned to include it in the ICA Miami exhibition along with Boogey Man, a large replica of a police car draped in a white sheet with eyeholes reminiscent of a Ku Klux Klan hood. “Calling it the boogeyman is in terms of a child being told who to be afraid of,” Hayden said. At the time of my visit, the piece was being fabricated in China. He had shortened the car in the middle, lending it a cartoon aspect that made it even more evocative of the Philip Guston Klan paintings that recently had provoked controversy because of their subject matter.

While he is starting to glimpse middle age on the horizon, Hayden as an artist is still very young. He left Cornell University in 2007 with an undergraduate degree in architecture, and, after receiving a fellowship, won positions as a house architect: He designed stores, first for Alice + Olivia, a women’s clothing company, then for Starbucks. About six months after starting at Alice + Olivia, in 2011, he was awarded a residency at the Lower Manhattan Community Council, which provided him with a studio. He would arrive there at 6:30 in the evening and stay late—often until midnight, sometimes until 4 a.m.—then go home, and return to the office at 10 in the morning. That was his daily routine. “This whole time I was an architect, I was going to the studio in the evening,” he remarked. “A lot of people always would ask, ‘Why are you working so hard?’ Now those people might say, ‘Why wasn’t I working?’ ” He noticed that most other young artists already had M.F.A. degrees. “I decided to go to grad school because I had a taste of the critical discourse from the residencies,” he said. He enrolled at Columbia in 2016 and earned an M.F.A. two years later.

Growing up in Dallas, the younger son of a father who was a middle school mathematics teacher and a mother who worked as a school counselor, Hayden visited the Dallas Museum of Art weekly. Still, he never realized that being an artist could be a way of making a living. He dreamed of becoming a landscape architect, and was especially enamored of koi ponds. “I was the youngest person in the local koi and water garden club in Texas, when I was 15,” he said. “Everyone else was 55.” He shifted his aspirations to becoming an architect once he realized that the credential would allow him to design any structure, including gardens, whereas being a landscape architect would limit him. His ambition was unbridled even then.

In Dallas, he was not only a Black kid in a mixed community, but also a gay kid with little interest in the prevailing sports-mad culture. At his all-boys high school, he joined the football team, as his father wanted him to do. “What I hated the most about football was that it was boring or dumb to me,” he said. “I was good at first, but I got lazy. The practice took so long. You’re at school until four, and then the practice is two or two and a half hours in the hot sun. I wanted to be at home gardening or watching Judge Judy.”

Various wooden materials in the studio.

Along with sadistic football helmets, Hayden has made a series of basketball hoops woven of rattan. The basketball subject matter immediately suggests David Hammons, an artist Hayden admires, but for Alex Gartenfeld, the artistic director of the ICA Miami, who curated the upcoming show, closer artistic precedents are Robert Gober and Charles Ray. “They share themes of childhood and memory and American culture,” Gartenfeld said. “Hugh has an interest in pairing eroticism with the use of material, a seductiveness to the surface, using materials in perhaps surprising ways. It’s so thoughtful and playful.” Hayden’s sculpture is also influenced by Doris Salcedo, the Colombian artist who transforms found pieces of furniture with subtle interventions.

Hayden’s show this past summer at Lisson Gallery in New York, “Huey,” featured many works that allude to white supremacy and Black oppression. Nonetheless, Hayden said, “I don’t like when my work is talked about only as the work of a Black artist.” Certainly, his use of wood can have racial overtones. In “Huey,” a dimly lit space contained six sculptures made from Gabon ebony, and they receded into invisibility in the darkness. But the most prominent piece in that room represented a spinning wheel with distinctly phallic spokes—a ash-up of the feminine and the masculine that feels very queer.

Hayden, with a sculpture in progress.

Hayden has an attachment to wood as a material. “He gets really obsessed; it’s a fun thing to see,” Levy said. “Not everyone who works with wood knows as much about trees as he does.” He made his first wood piece—a hand with twig fingers—while he was studying at Columbia, using a branch he harvested from a fallen tree with a handsaw. “My work started off as more identity-based on bark or skin color,” he said. “When it went below the surface, it could be about anyone.”

One of the pieces going to the ICA Miami is Roots, a large skeleton composed of branches of bald cypress, the state tree of Louisiana, where Hayden’s mother’s family is from. “A skeleton has no race or gender,” he remarked. “Just like a tree branch without leaves; you don’t know if it’s an oak tree or a cypress tree. The leaves on the trees are associated with the bark, feathers, hair, clothing, skin—what I call the organs of identity.”

Most of Hayden’s current work is still identity-based, but as with Roots, that is not always apparent. Often, the sensual allure of the piece outweighs the concept, and the artist is fine with that. “My work is sculpture and can’t be replicated in a 2D image,” he said. “It’s better to experience in person. It’s why we’re alive.”

Should I leave my husband who couldn't care less for our son?