Home » Lifestyle » I married the love of my life while in prison. We had to stand 6 feet apart and couldn’t kiss, but I’d do it again in a heartbeat. 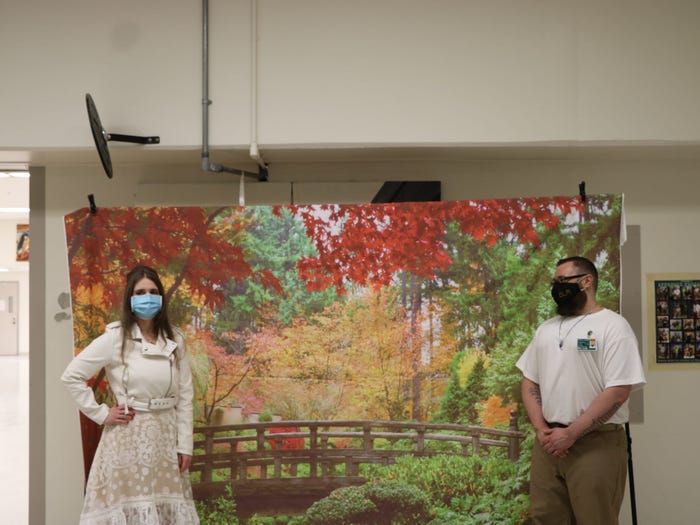 On the day of our September wedding, my fiancée Chelsea and her best friend Megan were the first visitors to a Washington state prison — the Monroe Correctional Complex, where I've been incarcerated since 2003 — since the COVID-19 pandemic ramped up in March.

Although we decided to get married last January, and were approved in May, we weren't able to exchange vows until four months later. Tenacity on Chelsea's part, along with help from friends in the right places, including Washington state senator Joe Nguyen, got us that far.

But the challenges didn't end when she arrived for what had to be the strangest marriage ceremony ever to take place, in or out of a prison. While the pandemic has thrown weddings, and life in general, into chaos, the disruptions have been particularly acute for prisons and the people living inside them.

We expected to wed in a virtual ceremony, but the Department of Corrections approved an in-person ceremony

When Chelsea and Megan arrived, a guard harassed them about the minute details. Both were stripped of their brand new custom-made masks, even as another guard nearby had to be reminded twice of proper mask protocol. A measuring tape was even brought out to measure Chelsea's heels and dress — modest by any standard, and well within the guidelines provided to her.

Finally, after thirty minutes of badgering, an administrator — levels above the guard in the chain of command — stepped in to allow Chelsea and Megan into the visit room, where I waited with George, my friend, fellow prisoner, and witness to the ceremony. Without this intervention, it is quite possible Chelsea could have been turned away.

The large, square, harshly lit space hadn't been used in months. The tables and chairs normally used for contact visits were piled up in the corner, and the standard backdrop typically used for photos of prisoners and their visitors occupied another corner. They would serve as the only decorations for the ceremony.

Chelsea and I stared at each other through tearful eyes, searching for words of comfort. It had been six months and eight days since I had seen her. I was thankful to see her eyes, at least, even as the mask hid the rest of her beautiful face. But it couldn't hide the pain. We were navigating an emotional minefield.

Chelsea and I originally met years ago, when she was teaching a constitutional law class at the Monroe Correctional Complex. Years later, we reconnected through our criminal justice reform work — mine from inside these walls, and hers from the outside.

When we decided to get married in January, I imagined this day much differently

Rather than six feet apart and masked, I hoped to be close enough to feel her breath on my face. As I stood there, finally seeing her in person, it was all I could do not to grab her hand. It broke my heart.

Frustrated and nervous, not knowing how the ceremony would proceed, we refused to waste even a second. We said how much we had missed each other and promised that everything was going to be OK. We must have said "I love you" a thousand times in those short minutes.

I wanted to hold her, whisper in her ear that everything was going to be fine, reassure her that this nightmare would soon come to an end. But the contract we signed in order to have our wedding meant an embrace could only lead to catastrophe.

Had we breached a six-foot distance, the ceremony could be terminated, Chelsea could be removed from my visit list, and I could be dragged to "medical isolation," which is essentially solitary confinement. We understood the need for safety measures, but the prison staff does not always abide by the same rules — an inequality that stings.

Our officiant, a chaplain who I came to admire for his unwavering devotion to prisoners, did his best to make the ceremony as beautiful as it would have been on the outside. We were blessed to have his compassion and love as he reminded us that we were now "one unit" that would move through the world together, despite our lack of physical proximity.

When it was my turn to read my vows, I choked up, barely able to read the words. I highlighted the love and empathy I had always experienced from Chelsea's kind soul. I pledged love and loyalty until the very end. In Chelsea's vows, she reminded me of the many strengths she sees in me and just how important it was to her to enter into a lifelong journey together. Her words meant the world to me — touching the deepest parts of my soul, one we now shared.

After the ceremony, we were moved one at a time to sign the marriage certificate, using pens we removed from plastic bags. After one of the prison administrators took a few photos, Chelsea was told it was time to leave. We cried as the realization hit: our time in each other's company was over, and we didn't know when we would see each other again.

I stood at the door that would lead me back to my 6'x9' cell. Watching her leave, I could see she was crying, and I could feel the warm salty tears slowly streaming down my own cheeks. George was saying something about how amazing our vows were, but I could barely hear the words coming from his mouth.

This is meant to be one of the best days in a person's life, I kept thinking. I know we won't remember it that way.

Prison weddings often look different than those on the outside

I didn't have time to pull myself together before George and I were taken into a room to be strip-searched. It was an unnecessary humiliation: We were never closer than six feet to anyone from the community, and the ceremony was watched by five prison guards, two administrative staff members, and dozens of security cameras.

When I arrived back at my living unit, I was in a daze. I wanted to feel happy and excited, the way grooms on the outside felt — and to some extent I did — but overall, the experience was painful, humiliating, and hard.

Each time a friend in my unit asked how it went, I struggled to give an answer. Mostly, I responded with a shrug and said, "It was difficult." There really were no words for this, the oddest wedding that ever took place. This would not be a fond memory on which to look back. Instead, it was just another way the DOC — and our country's mishandling of the COVID-19 crisis — had stripped a special moment from our lives.

In my unit, there never would have been a wedding with cake or dancing, regardless of COVID-19 restrictions. But if the pandemic had been handled more responsibly, I wouldn't have been deprived of the ability to caress my bride's soft hand, slide the ring on her finger, and seal our vows with a kiss I had thought about and planned for months. Under normal circumstances, we would have been allowed to share the moment with friends and family after the ceremony.

While we are grateful to finally be married, it's painful to see news stories of people ignoring the pandemic, having large weddings and parties, while we wait indefinitely to be able to hold each other again.

I'm sure lots of people think we don't deserve to be married, but the Supreme Court has ruled otherwise, upholding prisoners' rights to marriage as fundamental. Those same people likely don't care that a day we should have been able to enjoy turned into a nightmare.

But I wish they would consider the fact that most prisoners eventually return to free society. Allowing people like me to have strong, loving, and lasting relationships is not only a measure of basic human respect, but also helps make society safer.  Making our weddings difficult was punitive, rather than restorative.

Our wedding was conducted with social distancing measures so strict even a kiss to seal the marriage was forbidden, with the ceremonial placement of rings nowhere to be found. But it was still the moment we made a pledge to be together forever. And that is what we will hold on to.

Christopher Blackwell, 39, is incarcerated at the Washington State Reformatory in Monroe, Washington, and is working toward publishing a book on solitary confinement. His writing has been published by The Marshall Project, BuzzFeed, Jewish Currents, and many other publications. He is serving a 45-year sentence for robbery and murder. Follow Christopher on Twitter.

Olivia Bowen, Lauren Pope, Jesy Nelson and Courtney Green are all loving Calvin Klein bralettes – here’s how to get the look

Larry King Was Slammed for Giving O.J. Simpson an Interview the Day After His Acquittal