My 15 year old son has gone into the city to play pool. I’m trying to read in bed, but I can’t relax until he’s home safe. If I sound neurotic to you, it’s probably because you don’t have a teenager. 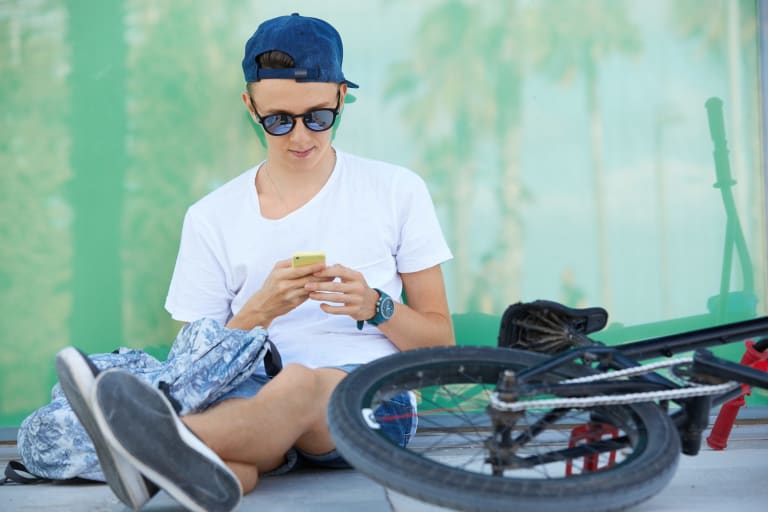 If this were the author’s son, and it was after dark, she would be onto his whereabouts.

It’s a dangerous world out there and bad things happen after dark. Alcohol, drugs, violence and sexual perversity, you name it. All of this while three pieces of my heart are wandering around in the world, beyond the reach of my protection. It’s terrifying.

Which is why, in a world where there are two kinds of parents of teenagers – those who track and those who trust – I am an unabashed, unapologetic tracker.

The tracking of my two younger teens is a wholly consensual arrangement.

They wanted a family Spotify account but I didn’t want to pay for it. Until I thought of something I wanted in return: their 24/7 location, in the palm of my hand. I did the Spotify thing and then asked them to hit the "share my location" button on their iPhones, permanently.

They agreed, without hesitation. I guess that should have told me something.

So here I am checking on their whereabouts. Twin Two is home at his father’s house, I can see his green dot safe and sound, it warms my heart. So that’s one child rounded up and back in the pen, one to go.

They wanted Spotify but I didn’t want to pay for it. Until I thought of something I wanted in return: their 24/7 location.

Twin One is at a pool hall somewhere near Central Station but oh wait, the green dot just refreshed, now he’s moved across the road. He’s probably at the bus stop, trying to get home.

First order of weirdness: Why wouldn’t he want a lift?

Then he asks if he can stay at his friend’s house in Rodd Point. I say, yes but curse myself for not having built up my spy network amongst his friend’s mothers.

Second order of weirdness: 11th hour sleepover requests. What’s he up to?

I know what my detractors are thinking: if you don’t trust them, they won’t be trustworthy. But I’ve tried that tack. It blew up in my face. Spectacularly.

With Eldest, I was all, “Oh he needs his autonomy”. Then a call from the local constable followed by a visit to the police station to have my son formally "cautioned’"for a certain misdemeanour in a park sobered me up like a sharp slap.

In the aftermath, this nagging question haunted me: Why wasn’t I paying closer attention?

It changed me as a parent. I now favour hyper-vigilance that borders on Carrie-Mathison-in-Homeland-level paranoia.

So I sit up in bed watching Twin One’s green dot obsessively.

He moves into the Devonshire Street subway tunnel. Is he getting a train? Third order of weirdness: There’s no train to Rodd Point. What’s going on?

Refresh. Now he’s in Belmore Park, the notorious vagrant haunt just near Central. What the …?

Twenty minutes later I’m there, cruising the perimeter, curb-crawling along the entry ramp to the station. An RTA woman with a traffic light saber tries to wave me away, "no parking here".

“I’m tracking a teenager!” I shout out my window.
She gives me a nod of understanding and lets me park for five minutes.

I get out, I peer into the park. Groups of teenagers everywhere. I check the app again, he’s on the move! Target is on the move! Looks like he’s on a bus, headed to … exactly where he said he was going.

Vanquished but relieved, I drive toward home. I’m nearly there, then I check the app again, now he’s in another park in Haberfield. I hone in – stay on target – I’m nearly there and then the suspect is on the move again. The green dot makes it’s way up a suburban street and enters a house in Haberfield.

I drive furtively toward the location, hunched over the wheel like a spy, peering out at the dark tree-lined streets as I go.

A sleepy suburban street. No sign of teenagers. The house seems benign enough, I mean, it doesn’t look like a meth lab. Okay, what do I do now? Do I get out the night vision goggles out and start commando crawling through the manicured Haberfield shrubbery? Peer through windows? Knock on the door and explain that I’m a neurotic freak and I need proof of life?

Then, suddenly he’s … across the bay, in Rodd Point. At his mate’s house, as agreed. But how’d he get there so quick? (A lag on the app combined with the fact that he got an Uber, he later told me. Which by the way, getting an Uber from Haberfield to Rodd Point– lazy and that’ll cost you a few stars.)

Although … the dot looks like it’s in the front garden of the house as opposed to in the actual building. Has he been conked on the head on his way to the front door? Should I just do a drive by to check that he isn’t lying in a pool of blood and needing urgent medical attention?

Then I see myself: tracking a 15 year old across the city and about to embarrass him by curb-crawling past his friend’s house like a lunatic helicopter parent. I pack up my Carrie Mathison surveillance van and head for home.

The next day, I confess what I’ve done to a friend. She makes sympathetic noises, but I can tell she thinks I’m slightly bonkers.

It’s all kinds of wrong, but it’s from a place of love, is what she means.

I can live with that.