They meet in the women’s toilet at a funeral. He’s snorting coke, and she’s surprised; he spins a yarn, and she’s intrigued. So begins the off-and-on, topsy-turvy and ultimately destructive relationship between George and Diana, the subject of this play by Jackson Used, here having its world premiere.

Lilac has had a five-year journey to the stage, with the pandemic shelving its debut in both 2020 and 2021. You can tell it has been honed, but it could be better still. Used presents the story as a mosaic of incidents in which chronology becomes blurred, and the effect is cumulative. 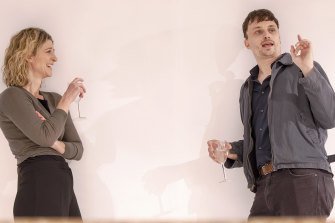 Kate Skinner and Jack Angwin in Lilac before their relationship goes from sour to rancid.Credit:Phil Erbacher

It’s an ambitious approach, requiring myriad snappy interactions across 85 minutes, and while some dialogue is pin-sharp enough to fulfil this ambition, at other times it drifts out of focus with superfluous lines, or the characters become too articulate when trapped in emotional mazes.

This Sandpaperplane production starring Kate Skinner and Jack Angwin could instantly be improved if director Shane Anthony told his actors to project more.

They might be breathing secrets to each other, but we have to be let in on those secrets, and too often the words are lost, especially from Skinner’s mouth. A couple of times Anthony also has them on the floor for an extended period, putting them out of sight for a proportion of the audience as well as out of earshot.

Yet when the dialogue is raw and truthful and the actors are projecting, it’s an insightful and sophisticated piece of work. In one exquisite sequence, after Diana has had an abortion, petals cascade from the flies, falling on to the bench which is the lone piece of furniture on Adrienne Andrews’ white-box set, and there Skinner moulds them into a shape that might be a baby.

Angwin also plays George’s best mate, Paul, with whom Diana strikes up an affair as things go from sour to rancid with George. Angwin is at his best when being contained, whereas Skinner tends to be stronger when the emotions at work are fiercer. Ultimately, it is play about how our most intense relationships change us as people. “Why couldn’t you be like this when I met you?” Diana asks George near the end. “Because I hadn’t met you,” he replies.

You helped me take control of my physical and mental health