Lachlan Gillespie, better known to your kids as Lachy the Purple Wiggle, can’t quite believe it. A week out from Triple J’s Hottest 100 and The Wiggles are currently favourites to top the countdown. With a Tame Impala cover, no less.

“It’s bizarre, it’s just been this amazingly popular thing,” Gillespie, 36, says. “In the end, it’s been a special experience for all of us.” 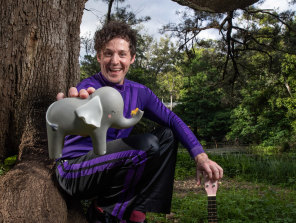 Purple Wiggle Lachy is excited The Wiggles’ Elephant cover is a favourite to win Triple J’s Hottest 100 this year.Credit:Paul Harris

Almost a year on, the delightful dissonance of hearing Australia’s kids’ music icons covering the hipster psychedelia of Kevin Parker has proved difficult to resist. According to online aggregator 100 Warm Tunas, the most reliable predictor of Hottest 100 success, The Wiggles are primed to finish first in next weekend’s countdown.

If they win, it will mark the first time a Like a Version cover has ever claimed the countdown’s number one spot (Denzel Curry’s viral cover of Rage Against the Machine’s Bulls on Parade came closest, finishing fifth in 2019’s list).

And even if it doesn’t win (the margins between the top challengers, including The Kid Laroi, Gang of Youths and Olivia Rodrigo, remain close), it’s at least likely to outpace Tame Impala’s own version of Elephant, which finished at number seven on the Hottest 100 in 2012.

“It’s an absolute spin-out,” laughs Blue Wiggle Field, 58. “It’s not something we ever thought would happen. But we really did do the song out of love.”

Suffice to say, Tame Impala wasn’t dominating The Wiggles’ listening habits before they tackled the tune.

Gillespie, with his background in musical theatre (he currently has Waitress on high-rotation at home), wasn’t at all familiar with Parker’s cosmic wizardry. He says the band received a list of potential covers from ABC Music manager Nick Webb, including Rihanna’s Umbrella, but Parker’s song struck a chord.

“As soon as we heard Elephant, it seemed a good fit. The lyrics were semi-Wigglish; we have a few songs about elephants, too,” he laughs.

Gillespie’s pitch-perfect evocation of Parker’s vocals, not to mention his keytar solo, have been singled out among the cover’s highlights. But he initially underestimated the song’s deceptive complexity.

“It seemed quite straightforward. But then we actually went to rehearse it, and the phrasing and the timing of it – we were kind of blown away, he is an incredible musician,” he says of Parker.

“We had a really tricky time. With some of the bars I think we counted to, like, 11, so we knew when to come in on that bass riff. It was a great exercise because most of our songs are so simple, just in 4/4 time. Since then, I’ve listened to a lot of [Tame Impala’s] music, and there are some great songs.”

Field says an early iteration of the cover was so respectful to the source material it led Webb to quip, “Sounds like a cover band. What’s Wiggly about it?” His solution? Bring in some Fruit Salad (yummy, yummy).

The final, manic version – with Lachy’s embrace of Parker’s Lennon-ist delivery, Simon’s booming baritone, and Emma having the time of her life trading time-signatures behind the kit – has a warm cross-generational charm, musicians appreciating other musicians (Parker, for his part, also reacted favourably to The Wiggles’ effort.)

Bryce Mills, host of Triple J’s breakfast show which presents Like a Version, says the idea to get The Wiggles on was first suggested by a listener.

“I honestly didn’t think it’d happen, but when it did, I spent the whole day with a huge smile on my face,” he says.

“Watching people who defined your childhood stand in front of you and play a song from an artist who’s helped define your early adulthood is a really weird but really joyous feeling. People around the world felt the same way… Not many covers can win over three generations at once.”

Given the track’s novelty value, its viral triumph was more or less guaranteed. But it was so successful it even prompted an upcoming album titled ReWiggled, with The Wiggles covering classics from contemporary bands, like The Chats’ Pub Feed, and vice-versa.

“Triple J listeners have grown up with The Wiggles, they’ve grown up with Fruit Salad,” Field says. “I was talking to the guys from Lime Cordiale recently, and they were telling me how they listened to The Wiggles when they were kids. So I’ve started listening to their music too, it’s been good.”

Besides the next-gen incongruity, the mere existence of The Wiggles’ Elephant perhaps isn’t the outlier it seems.

Any parent who’s endured repeats of The Wiggles’ discography would be aware of the band’s affinity for pop’s classic building blocks – deeper cuts like Today and The Wonder of Wiggle Town that, like Parker’s own work, are inherently indebted to The Beatles and The Beach Boys – and their wider spirit of musical discovery, from Pryce’s infatuation with Saint-Saens to Field’s insistence on pulling out his bagpipes.

“When I was at university becoming an early childhood teacher, our music teacher Rosemary Harle told us that children will get whatever music their parents listen to, that one radio station or that one style of music. So when The Wiggles started it was always, well, maybe we can give the whole world of music,” Field explains.

“Children are so open to every kind of music, so we’ll do a bit of classical, do some rock. And then Highland music and folk music – I mean, I don’t know where kids are going to hear that if we don’t play a bit of it. I feel we’ve got a responsibility to play all styles of music for children, because they’ll get pop radio any time.”

Gillespie, meanwhile, is leaning into the band’s Hottest 100 hopes, if not for his own amusement then to honour The Wiggles’ original core – Greg and Murray and Jeff and Anthony – following the group’s 30th anniversary last year.

“It’s such a nice thing for them,” he says, “and it’d be really special because it came out of nowhere. It’s just a cool thing to add to The Wiggles’ list of amazing achievements and a really nice celebration of 30 years of Wiggling. If we can get in the top ten, that’d be pretty awesome.”

Ben Nevis climber, 21, who died after falling 1,600ft is pictured for first time

3 Enneagram Types Who Prefer To Keep Their Relationships Casual