Home » Lifestyle » ‘It’s been unbelievable’: The surprising success of Everything Everywhere All at Once

Hot dogs for fingers, a racoon who puppeteers a teppanyaki chef, and talking rocks. 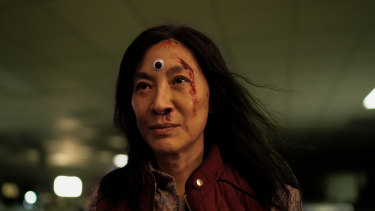 “A very, very unusual film to be playing this long”: Michelle Yeoh in Everything Everywhere All at Once.Credit:A24

Directed by little-known Daniel Kwan and Daniel Scheinert, the American sci-fi action comedy Everything Everywhere All at Once is still performing strongly in cinemas after 13 weeks, despite getting a digital release for home viewing almost two months ago.

At a time when most art-house films have been failing, it has taken an impressive $6 million locally and made Michelle Yeoh, best known for Crouching Tiger, Hidden Dragon and Crazy Rich Asians, one of the faces of winter at the movies alongside Tom Cruise, Austin Butler, Chris Hemsworth and the Minions’ Gru.

But the clever concept in Everything Everywhere – brilliantly executed – is that Evelyn has to connect with other versions of herself to stop a villain who wants to destroy an infinite multiverse.

Jumping between parallel universes, she is variously a movie star, a martial arts hero and other Evelyns who made different decisions earlier in her life, including turning down Waymond’s rash proposal.

It is a wildly frenetic, chaotic and fun film that people mostly under 40 are enjoying as a shared experience in cinemas, just as teenagers are dressing in suits to watch Minions: The Rise of Gru.

While the directors are really only known for the 2016 cult comedy Swiss Army Man, which had Daniel Radcliffe playing a farting corpse who washes up on a beach, social media has been amplifying interest in Everything Everywhere since it premiered at South by Southwest in March.

It has what the cinema industry clumsily calls “a coolness factor” from being made by A24, the American producer-distributor behind such hit films as Hereditary, Moonlight, Lady Bird, Uncut Gems and Minari as well as the TV series Euphoria and Irma Vep. 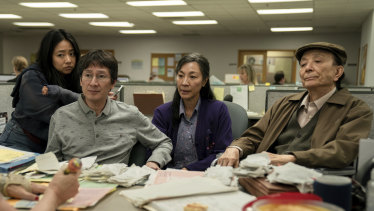 At the tax audit: Stephanie Hsu, Ke Huy Quan, Michelle Yeoh and James Hong in Everything Everywhere All At Once.Credit:A24

“It’s been unbelievable,” says Benji Tamir, program manager for the family-owned Randwick Ritz in Sydney and the Classic, Lido and Cameo cinemas in Melbourne.

“We’re seeing so many films fail week after week, especially independent art-house films, so for something to do so well is a great feeling.”

When the cinemas launched Everything Everywhere at Fantastic Film Festival in April, it sold out six sessions virtually overnight.

“It’s whacky and it’s different,” he says. “It’s long – probably a bit too long – but it’s something fresh.”

The audience has been largely under 30 “but also older people by mistake,” Tamir says. “When it first came out, lots of people thought it was this big sensation that they needed to see. A few older people came as well, and they didn’t enjoy it.”

Some fans have watched the film for the second, third and fourth time so they can bring friends.

While there are elements of such offbeat hits as Eternal Sunshine of the Spotless Mind and Being John Malkovich crossed with The Matrix, a more recent hit helped its success.

The chief executive of distributor Roadshow Films, Joel Pearlman, says the multiverse in Spider-Man: No Way Home – repeated in Doctor Strange in the Multiverse of Madness – meant audiences instantly understood what was happening in Everything Everywhere. 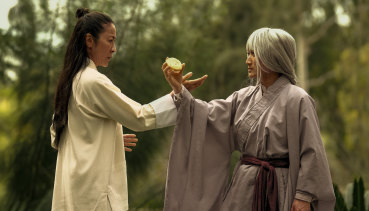 Michelle Yeoh (left) and Jing Li in Everything Everywhere All at Once.Credit:AP

“It’s a very, very unusual film to be playing this long after it went onto home entertainment platforms,” he says.

Pearlman says it is also rare how much fans want to talk about what happens – teasing out details – after watching it.

“As soon as we read the script, there were a few things that really stuck out,” he says. “The first was that it was a completely original world that they were building and that was immediately compelling. The second is that Michelle Yeoh is almost an old-fashioned movie star, and we felt that this was a really iconic role for her.”

Pearlman expects Everything Everywhere to become a staple of outdoor cinema seasons over summer. 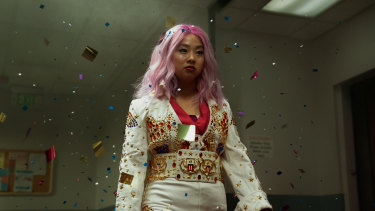 Stephanie Hsu in Everything Everywhere All at Once.Credit:A24

While it is a comedy, there is something about the film that seems to be connecting with audiences on a deeper level.

There is surprising heart in the themes: someone literally living the worst version of their life gets a chance at redemption; a mother comes to accept a gay daughter; a fractured family comes back together; and even two opposites – a tax auditor and the hapless subject of her investigation – discover their shared humanity.

The film’s success shows that audiences have no trouble accepting central characters who are not young, white and male, played by actors who are not major Hollywood stars.

While mainstream Hollywood relies on adaptations of popular novels, comic books and TV shows to limit financial risk, the type of edgy material that A24 specialises in – often bold, original ideas that rely on strong performances – can still work in cinemas.

The chief executive of Palace Cinemas, Benjamin Zeccola, describes Everything Everywhere as “a great art-house movie” and is not surprised by its success.

“Australians love going to cinemas to watch great movies,” he says. “For anyone that was saying cinemas are a thing of the past, every genre has now re-established itself as worthwhile at the cinema.”

Zeccola confirms that fans are watching it more than once.

“It’s hard to understand first time around,” he says. “And it’s definitely standing up to a second viewing.”

How to seize back control of mood swings