Jacqui Lambie was riddled with back pain and fighting for compensation during post-army “hell” when she made a deal with God.

“I never thought about faith or anything … (but) if he could just give me a second chance at life I would fight like hell for veterans,” the Tasmanian senator told the Royal Commission into Defence and Veteran Suicide on Friday. 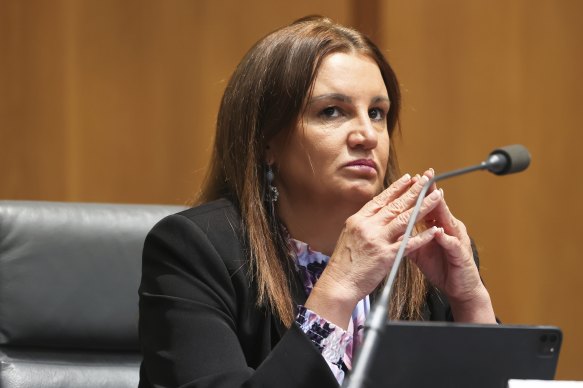 “I could understand what was going on. They weren’t getting a fair deal.”

Lambie, who has for years pushed for an inquiry into the defence force, detailed a lengthy battle with the Department of Veterans’ Affairs for compensation for mental and physical health issues.

Lambie was medically discharged in 2000 from the Australian Army after 11 years of service following a back injury suffered during infantry training.

“When I went to get out of bed, I could not get out. From there it all just went downhill,” she said.

She told the inquiry the department conducted surveillance on her at her north-west Tasmanian home for six weeks, with a camera “coming over the back fence”.

Lambie believed they were trying to “set a trap” to avoid paying her benefits.

The Administrative Appeals Tribunal ruled in her favour after a legal battle spanning years.

The mother-of-two spoke about her suicide attempt in 2009 following a downward spiral involving drinking and painkillers.

“I wrote my sons a letter each. I knew my time was up. There was nothing left of me after that. I had no fight left in me,” she said.

Lambie, first elected to parliament in 2013, said she developed an interest in politics because the only way to help veterans was to be “inside the pie”.

She called for a royal commission into defence force culture during her maiden Senate speech.

“I want to thank my family for the 10 years of hell they had to go through,” she told the inquiry during a tearful opening statement.

“That was very difficult for [my parents], watching their daughter … being reduced to basically an empty human being.

“To my youngest son … you had to care for me. I know you are still paying the price for that.”

The inquiry, called by former prime minister Scott Morrison in April 2021, will hand down an interim report on Thursday with urgent recommendations.

Lambie said addressing the length of time taken to process veterans’ claims for compensation should be a top priority.

“They’re taking two years before they even get to a delegate. That needs to be (fixed) immediately,” she told reporters outside the hearing.

She urged people to share their stories, describing herself as “one of the lucky ones” who has come out the other side.

“Even if you do not want to do it for yourselves, do it for your mates because there is nothing else if we do not fix it this time,” she said.