Federal Labor’s national secretary, Paul Erickson, has met with Beijing’s ambassador to Australia Xiao Qian to discuss the trade sanctions on Australian exports and a recent incident involving a Chinese fighter jet and RAAF surveillance aircraft in a further sign the new government is intent on improving relations with China.

The meeting came at the embassy’s request and took place last Tuesday in Canberra, after the Labor Party official sought advice from the government to confirm the meeting was appropriate. 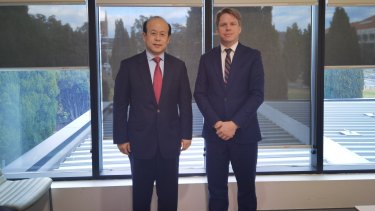 The embassy posted a picture of the pair on its website after the meeting and said the pair “exchanged views on the relationship between the two parties, the two countries and issues of mutual concern”.

In a statement in response to questions about the meeting Erickson said it “was an opportunity to share the Labor Party’s view that a constructive relationship between Australia and China is in both of our countries’ interests”.

“I reinforced Labor’s view that trade restrictions against Australian exporters are unreasonable and should be lifted in order to stabilise the relationship,” he said.

“I also took the opportunity to raise concerns about the treatment of Australians detained in China, and reinforced the deep concerns raised by Defence Minister Richard Marles about recent PLA behaviour towards an Australian aircraft.”

That incident saw a Chinese fighter jet release flares and small pieces of metal known as chaff dangerously close to an Australian RAAF P-8 surveillance aircraft, threatening the safety of the plane and the crew.

The episode was described by Defence Minister Richard Marles as “very dangerous” and raised his concerns directly with Beijing.

Marles met with China’s Defence Minister Wei Fenghe for an hour during the Shangri La dialogue in Singapore last week, the highest level contact between ministers from the two countries in more than two years.

Xiao’s efforts to meet senior figures in both major parties have been interpreted as the beginning of a potential thaw in relations between Australia and China.

Diplomatic relations between Canberra and Beijing have been in a diplomatic deep freeze because of more than $20 billion in sanctions and tariffs on Australian goods including beef, barley, wine, coal and lobsters.

TOM UTLEY: A drink was good enough for Churchill in the war