A clash over economic experience and political integrity will shape the final day of the federal election campaign after Prime Minister Scott Morrison scrambled to gain ground in target seats on the strength of internal polling that identified late swings that could keep him in power.

Labor leader Anthony Albanese stepped up his campaign with visits to three states and a pledge to Australians to deliver a unified government that would act on corruption, the cost of living and climate change. 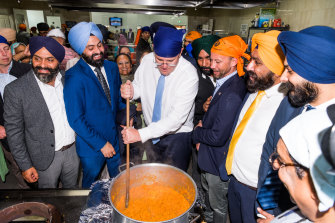 Key figures on both sides admitted the contest was tight despite national polls showing Labor was positioned to gain the 76 seats needed to form government and end three terms of Coalition rule.

While Labor insiders expressed confidence they could gain seats such as Reid in western Sydney, Chisholm in Melbourne, Boothby in Adelaide and Swan in Perth, members of the Coalition campaign team insisted the government had regained support over the past week and might be able to block a Labor victory.

With 379,000 active coronavirus cases across the country, election authorities are under extraordinary pressure to ensure eligible voters have a chance to cast their ballots even if they are in isolation, triggering emergency steps on Friday to extend the use of telephone voting.

Morrison urged Australians to back him to manage the nation’s finances on the grounds that deficits would be deeper under Labor and the Coalition had delivered results including 3.9 per cent unemployment, the lowest in four decades.

“We’re turning the corner and we’re getting the pandemic behind us, thankfully, and we can’t take the risk of turning back now,” he said.

“We need to ensure that we keep moving ahead with that strong economy that sets you and your family up for the future.”

Albanese named Labor plans including a $5.1 billion childcare policy and a $1.5 billion outlay on education and training to assure voters he had a vision for the future when the alternative was “more of the same” from the Coalition.

“What the government has is fear campaigns and smear campaigns – shirking responsibility and smirking while they do it,” he said.

While Morrison emphasised the federal budget, Albanese named integrity as a priority after six weeks of campaigning for the Labor policy to set up a stronger federal commission to investigate corruption. 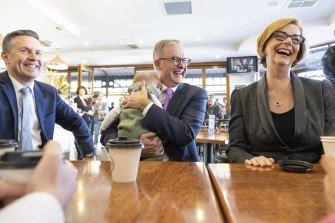 Pointing to Morrison’s statement last week that he could be “a bit of a bulldozer” but would change gears after the election, Albanese set up a contrast over the ability to bring people together.

“This guy himself has said, remarkably during this campaign, that he’s a bulldozer,” he said.

“Bulldozers wreck things. I’m a builder and I want to build things.”

Asked what he had that Morrison did not, Albanese said: “I have integrity and the capacity to take responsibility.”

Morrison began the second-last day of the campaign with six broadcast interviews on the Seven, Nine and ABC television networks and the 2GB, 3AW and 6PR radio stations, reaching an audience of more than 1.1 million people.

The Prime Minister also appeared on a handful of FM radio interviews, reaching even more voters, and then campaigned in the Perth electorates of Swan, Pearce, Hasluck and Cowan before flying to Victoria late on Friday to defend electorates Labor must win to form government.

Albanese spoke on ABC Radio’s AM program before meeting Julia Gillard in South Australia to appeal to voters in the swing seat of Boothby, held by the Liberals but targeted by Labor, and speak to students at an Adelaide high school.

Members of the Coalition campaign team, speaking on condition they not be named, conceded that independent candidates had put Liberal MPs under immense pressure but that Treasurer Josh Frydenberg would hold Kooyong against Monique Ryan.

Liberals admitted the danger was far greater to Assistant Minister Tim Wilson, who is defending the nearby seat of Goldstein against a powerful campaign from former journalist Zoe Daniel.

In Sydney, Liberals said the antipathy toward Morrison could be strong enough to help independent Allegra Spender remove the Liberals’ Dave Sharma from Wentworth but that personal support for the sitting MP made the contest too close to call. They conceded that independent MP Zali Steggall would hold Warringah against controversial Liberal candidate Katherine Deves.

The battle for North Sydney, meanwhile, has turned into an unpredictable three-way race with the Liberals defending their MP, Trent Zimmerman, against a strong campaign by Labor candidate Catherine Renshaw, who could eclipse independent candidate Kylea Tink.

In other seats, however, the Coalition campaign members said Labor had held the upper hand for most of the campaign but that things had changed in the past week with support shifting to Liberals in suburban electorates.

About 10 per cent of voters remain undecided, they said, and could still be persuaded to return to the Coalition in knife-edge seats including Bass in Tasmania, Robertson on the central coast of NSW, Chisholm in Melbourne and Pearce in Western Australia.

Bennelong, the Sydney electorate held by former prime minister John Howard but won for Labor by Maxine McKew in 2007, is seen by both sides as one of the tightest contests and a key seat to watch on Saturday night.

The Coalition believes it is safe in Higgins in Melbourne, Longman on the northern edge of Brisbane and Braddon in northern Tasmania. In the neighbouring seat of Bass, Liberal MP Bridget Archer has launched a last-ditch effort to hold on by dumping the Liberal brand and any mention of Morrison.

Labor campaign insiders expressed confidence the party had held its lead over the past week and remained in a winning position, saying there was an element of “bluff” to the government’s talk of late gains in suburban seats.

While Morrison campaigned in the western Sydney electorate of Werriwa on Thursday night, senior Labor figures dismissed the idea of a shock Liberal success in the traditional Labor seat and similar outer-suburban electorates.

The Morrison campaign is targeting multicultural and faith-based communities in suburban Australia to repeat some of the Coalition’s success at the last election, but Labor believes it can hold seats such as McEwen, on the northern edge of Melbourne, and Fowler, where frontbencher Kristina Keneally is seeking a seat in the lower house.

Albanese flew to Melbourne late on Friday to target Chisholm and other Liberal seats, while Morrison is expected to visit Melbourne on Saturday.

Gillard, in her first public foray into the campaign, stood alongside Albanese at a press conference to endorse him as the best choice for prime minister and to urge women, in particular, to back Labor because it would form a better government for women.

Asked about Labor disunity a decade ago, when Albanese supported Kevin Rudd against her, Gillard said she had worked closely with Albanese every day.

“My clear memory of that period is that Albo and I worked together every day, we occasionally had differences of views, we never exchanged a cross word, we worked together productively in the interests of the government every day,” she said.

“And when the opportunity came to vote for Albo as deputy prime minister, I did.”

Budget 2021 news – Taxes for DECADES to pay off coronavirus cost as it soars to £407 billion, Rishi Sunak warns