Home » Lifestyle » Legendary bassist steps out of the shadows

Rock bands are rife with sidelined songwriting geniuses waiting for their moment to shine – take a bow George Harrison, Dave Grohl, Phil Collins, et al – but few background players have taken quite as long to step into the spotlight as Phil Stack, bassist for pop-rock act Thirsty Merc.

Not that the forty-something Sydney-based musician has been idle: also the go-to double-bassist for jazzman James Morrison, Stack has been writing songs for years, although he only released his debut solo album, Colourful, Noisy, in March. 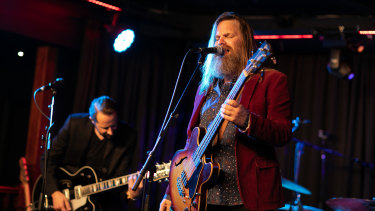 Strolling onto the stage with the air of a man with nothing to prove, Stack and his three-piece band launch into a muscular, energetic version of album track Celebrate Life that is considerably more rollicking and funkier than its recorded incarnation.

Stack takes a seat at a piano for next number Golden Eye, a song that appropriately sounds like a cross between the theme song for a James Bond film and a The Bends-era Radiohead ballad.

Not content just to show off the pop side of his repertoire, Stack pulls out a man-sized double-bass to lead the band and guest trumpeter Harrison Ball through a spirited jazz number, the musicians ably demonstrating their skills stretch far beyond that of the average rock band.

After the genre detour it’s back into ’70s pop-rock territory with the fantastic Trading Up, a song that could pass for a lost Electric Light Orchestra track if Jeff Lynne had sunk his money into bad drugs rather than giant spaceship stage props.

Amid all the instrument-swapping and genre-hopping, Stack and his band look both at ease and in complete command of their craft, clearly enjoying the rare opportunity to play to a live audience.

As a beaming Stack and his band close out with a rocking cover of the Beatles’ She Came In Through the Bathroom Window, you can’t help but revel in the joy of this perennial support player finally stepping out and owning his new position as frontman.

September 2020 Will Be The Best For These 3 Zodiac Signs

'RHOA': Did Porsha Williams and Her Fiance Break Up?