The Liberal Party remains locked in a tight race to hold on to four battleground seats under siege from teal independents and Labor, as counting continued on Sunday.

The Liberal Party is growing increasingly confident it can fend off teal candidate Sophie Torney in the seat of Kew, despite a swing against the Liberal Party. 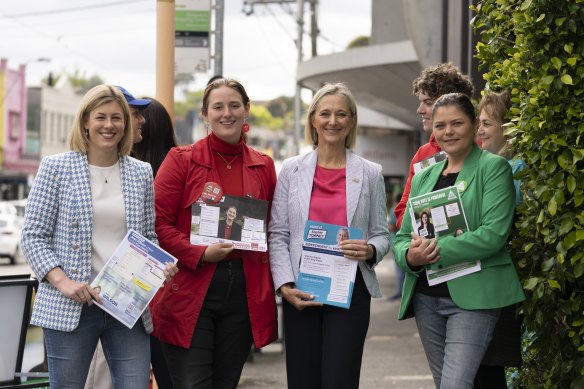 With 72 per cent of the vote counted, Liberal candidate Jess Wilson was slightly ahead of Torney in the seat, which was previously held by outspoken former MP Tim Smith.

Labor has lost the neighbouring seat of Hawthorn, which remains on a knife edge between Liberal candidate John Pesutto and teal independent Melissa Lowe.

Pesutto edged ahead on Sunday based on postal votes. With 70 per cent of the vote counted, Pesutto led by 480 votes at 10am on Sunday morning with postal votes expected to favour the Liberal Party.

Pesutto is a potential Liberal Party leader after Matthew Guy announced on Sunday he would not recontest.

A Liberal Party source, said Pesutto was in a "good position" in Hawthorn but acknowledged "things swing around wildly".

Several Liberal MPs told The Age, Pesutto had already reached out to some members of the party room to canvass support for a leadership bid, should he win.

Liberal MP Brad Battin is also expected to contest any leadership contest, confirming to ABC radio that his ambition for the top job hasn't gone away after his unsuccessful bid in 2021.

He said we would support any leader that can "build, commit and stay on track" and would be the "best for the Victorian Liberal Party."

Both Kew and Hawthorn sit within the federal electorate of Kooyong, which was lost by former federal treasurer Josh Frydenberg in May.

Deputy Liberal leader David Southwick appears to have staved off Labor and the Climate 200-backed teal independent in the marginal seat of Caulfield as more postal votes were counted. On election night, Southwick appeared on track to lose his seat to Labor’s Lior Harel.

The teal independent Kate Lardner remained confident of snaring the seat of Mornington from Liberal candidate Chris Crewther. Postal votes have kept Crewther, a former federal MP, in the race.

Counting is also continuing in battleground seats in inner Melbourne, where big swings to the Greens are threatening Labor strongholds.

While Labor has lost Richmond to the Greens, the Andrews government was holding on to hope in Albert Park, where the Greens candidate was on track to finish third.

In Northcote, Labor has pulled slightly ahead of the Greens with local MP Kat Theophanous leading by 865 votes as of 10.30am Sunday.